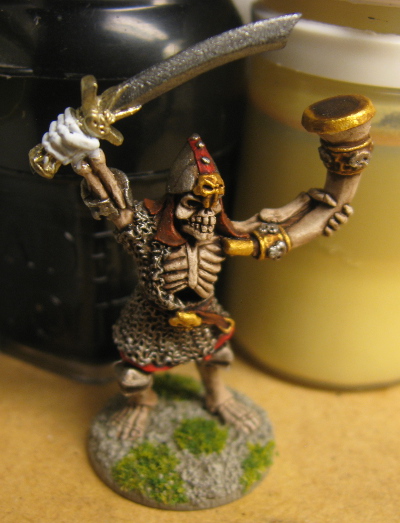 I recently found the missing right hand of this living impaired fellow.

It broke off a LONG time ago, and I thought I had lost it completely, but here it is once more.

Got it glued back on, and blocked out the colours, just need to give it a good wash or two, to shade and tone it, and he can rejoin the Skeleton Warrior unit I painted him for.

I really look forward to be able to field the 36 points Infantry Main Battleline I have planned and am now making the last two units for - six formed units forming an almost impenetrable phalanx, with the Necromancer safely hidden in a Chariot behind it, able to cast Miracles, and use his Raise Dead/Skeletons ability. Dead simple, and deadly!

I can then upgrade the army to 48 points by taking the Undead Knights, while getting three units of Skeleton Warriors (8 points each) ready for a smashing 60 points 9 units Infantry Battleline.