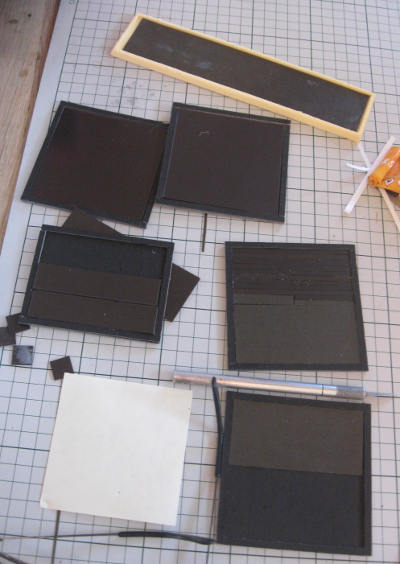 As mentioned back in October, I set about making some movement trays for use with Formed Units in God of Battles. In the meantime, I have made a small selection out of thick cardboard, and today I set about getting some of them magnetized.

With the Tomb Kings job lot I purchased late summer, I got some resin movement trays with self-adhesive magnetic sheets, and some extra sheets, and from the magnetic sheets I use in my figure storage boxes, I had some strips that I have to cut away for the sheets to fit.

As you can see, I just mix and match the pieces I have, to fill as many of the trays as possible with magnetic sheeting - and as the magnets are going to be mostly covered by figure bases when in use, the rag-tag appearance does not really matter.

Some of the extra sheets are of the same thickness as the cardboard I use for the trays, so I shall have to put another layer of rim on the ones I used those for.

Future builds will consist of the full bottom of the bases covered in magnetic sheeting, and the rims glued on top of that, but the existing trays are all going to have the inside of the rims covered like this. I shall have to build a couple more of the 9x9cm trays, as I like to have some of those for 12-man units that have a Character and/or Unit Enhancements attached (otherwise one or more of the figures will have to be placed outside the tray), and it is also nice to be able to place Activation Tokens and/or Miracle Effect Tokens on the bases of the units they affect.