Chimney (and stove) on the Horizon!

The masons came by today and put up the scaffold for re.building the chimney pipe on the garage chimney: 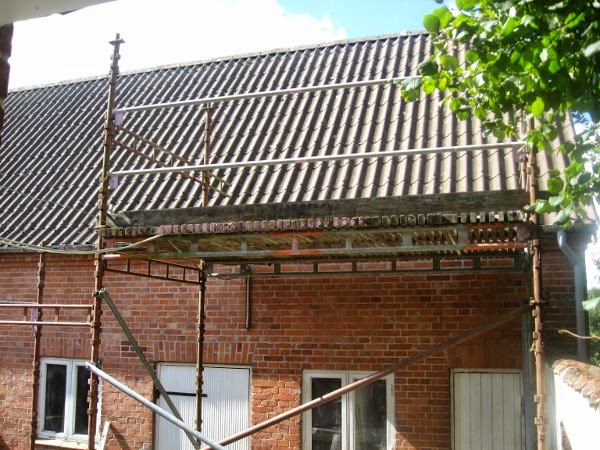 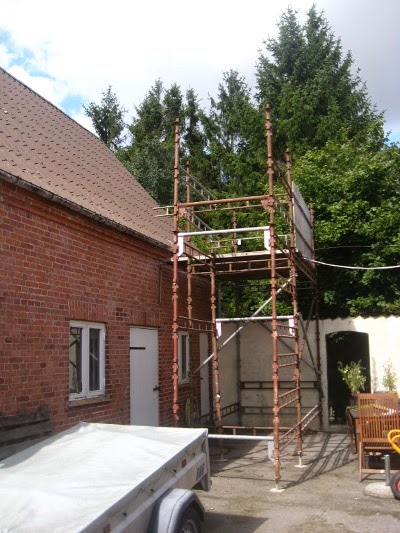 I am SO looking forward to get a stove installed in the attic - it will mean that it'll be possible to use the gaming parlour in all but the direst winter conditions! Later I may work on insulating the roof, but not right now...
Posted by Argonor at 22:35 2 comments: 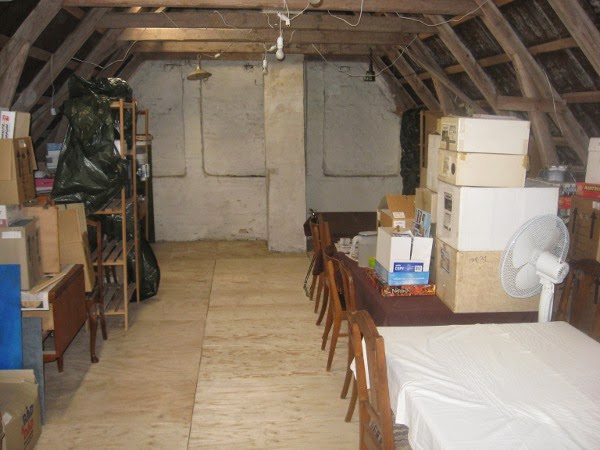 Been busy clearing the garage attic for the mason, as I'm going to have a new chimney pipe built, so as to be able to put up a stove in the attic.

In the meantime, I'll be working on my GoB 28 Lords of Undeath army; the first 4 units of Ghouls (Mantic zeds) onlly need one more ghoul painted to act as the unit leader, and the Undead Knights are almost finished, bringing the force up to 24 points quick-play.

As you can see from the picture below, the sand is just now settling on the bases, and they should be ready to get finished tomorrow. 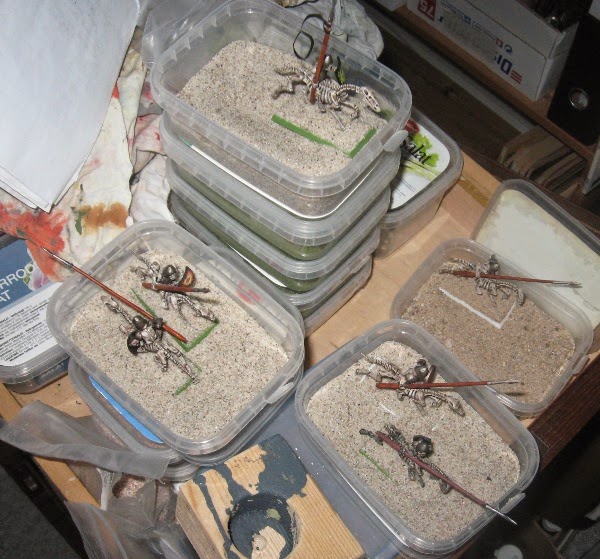 I have been rebasing some oldhammer plastic skeletons to use as Skeleton Hordes (units of 16 slow and - almost -  useless rabble). Bad pic because of the flash reflecting from the magnetic sheet: 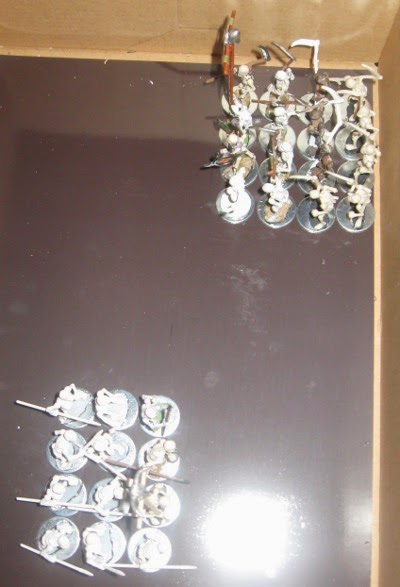 I am planning to use 2 chariots to make the 24 pts Command and Support for the initial force, and I got a thin steel plate today, to cut up for bases for those (and to make Warmaster bases for my future LotR 10mm project).

I still have lots of plastic skellies to use for additional Hordes, as well as units of Skeleton Warriors (slow, but not so useless rabble), and also plenty of archers to form some unkits from.

Added to that, I have quite a few oldhammer wights, mummies, ethereals, etc. - some even still in blisters, to turn into Blacksouls, Guardians of Midnight, and the odd Necromancer.

Tomorrow I have to prepare for my final science exam, so i probably won't get much else than the Knights' bases done, but Thursday and Friday should see some work on the chariots.

Here's the steel plate I got for 20 DKK from the local smith: 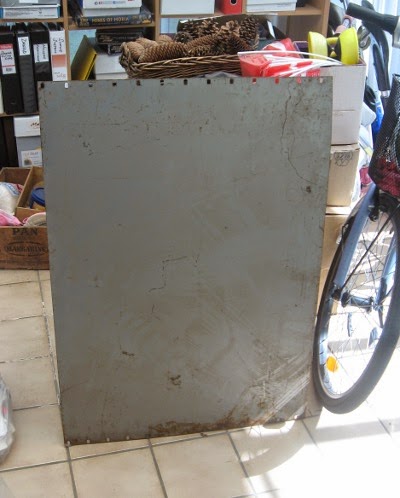 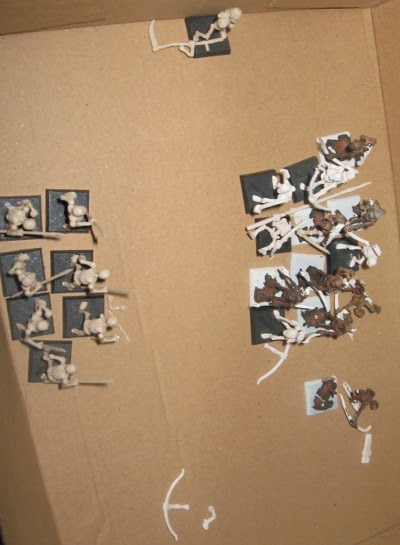 I just killed an old square slotta with my Dremel. It felt good! 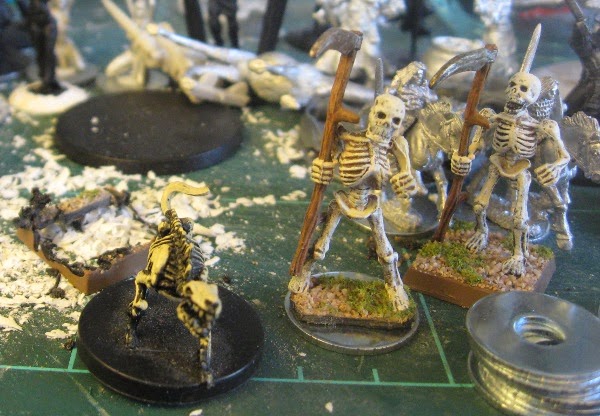 I am re-basing a horde of oldhammer plastic skeletons for God of Battles. They'll also do service as 'zombies with sticks' for PSZ, animated skeletons for Gothic Horror, and probably a lot of other things, but for now, they are destined to become part of Argonor's Army of Undeath. Behold and despair!
Posted by Argonor at 17:28 2 comments:

Pike & Shot AND Zombies Boards - Getting There! 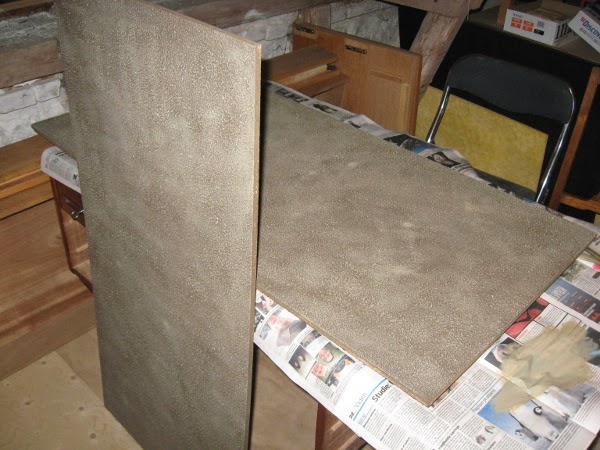 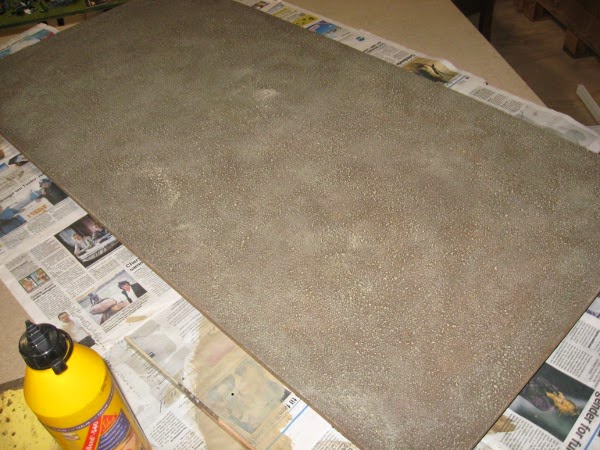 I am almost done preparing the boards for my first game of PSZ.

I basecoated the boards over the weekend, and as my eldest daughter has come down with a flu, I had to stay home from work today to look after her, and thus I could sneak out to the garage attic and drybrush the boards.

I have hit a bit hard with the brush here and there, and I'll mend that during the week, getting the table ready for a test run of the rules Saturday or Sunday (I may be going on a sailing trip with an old classmate one of the days, so I don't know, yet).

I'm looking forward to finally trying out this game that I've had in my possession for several years - will be interesting to see, if 30 zeds are enough for 2-3 survivors, or if I need to get some more done.

Only thing I need to do, now, is to make a Random Movement Template for the zombies, as I don't want to roll a dice across my game boards to determine direction, but I can mock one up with a ruler, and laminate it, for this first installment.

I'll be using some of the Event Cards (those I have the proper minis for), so I have to print, laminate, at cut out a set of those, too, but that's a question of dedicating 10 minutes or so...

Back from the... Vacation!

And a new challenge is issued; The Great War Painting Club at the LAF is calling for some minis to be panted.

I had to search through some of my big boxes to unearth this small box of WWI minis I won on Evilbay some years ago: 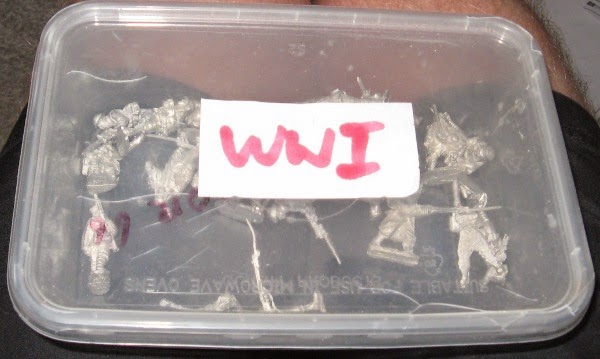