I have been sorely neglecting this blog the last year, and left the summer vacation of 2016 hanging in mid-air, but I intend to bring my holiday memories up to  date over the next couple of months.

I shapped a few additional photos on the way from the Roman city to the exit of the Empúries cite. 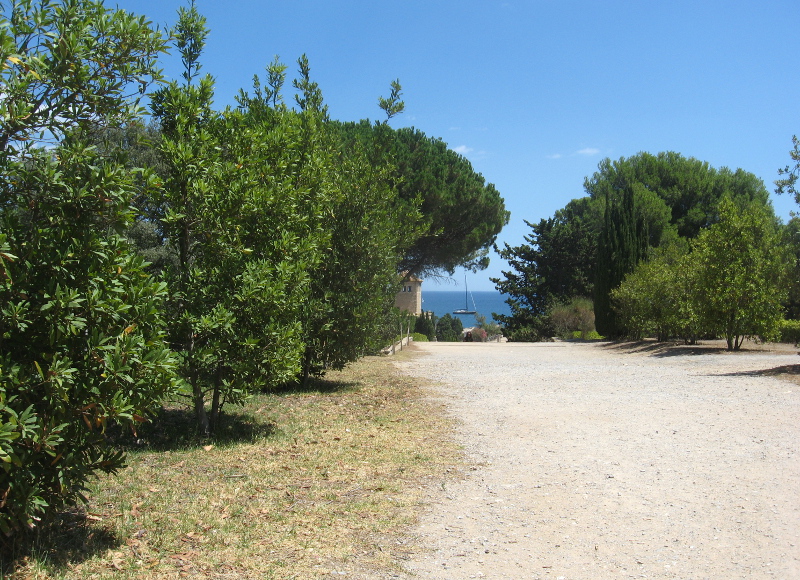 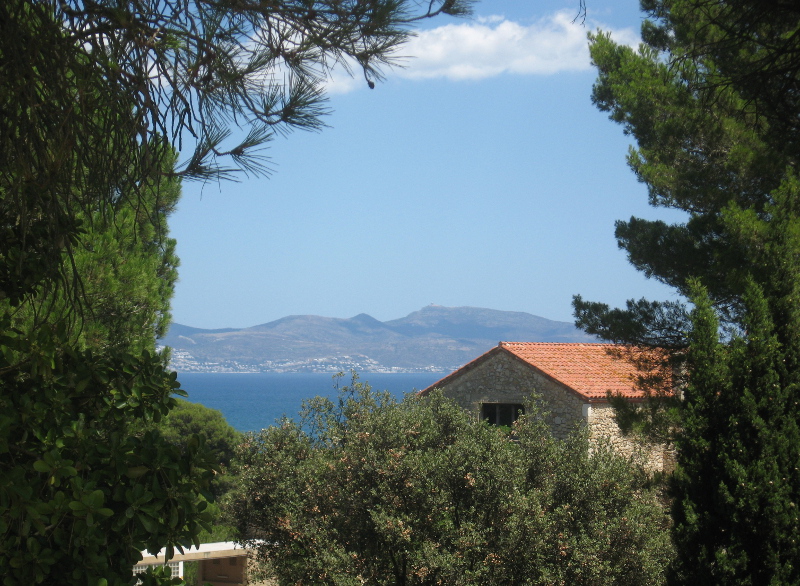 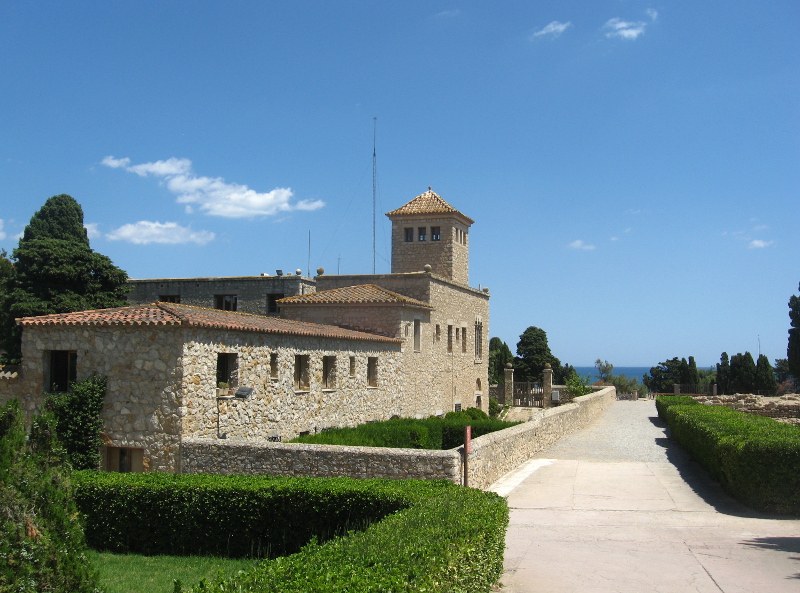 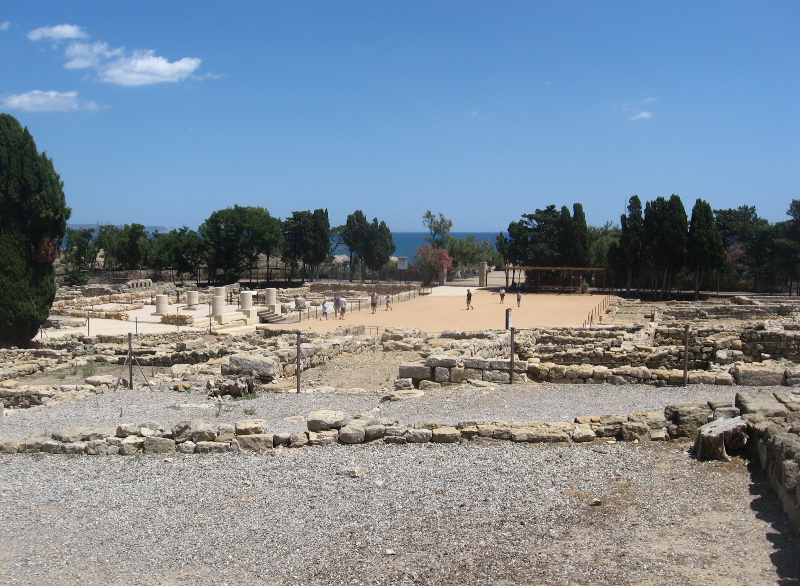 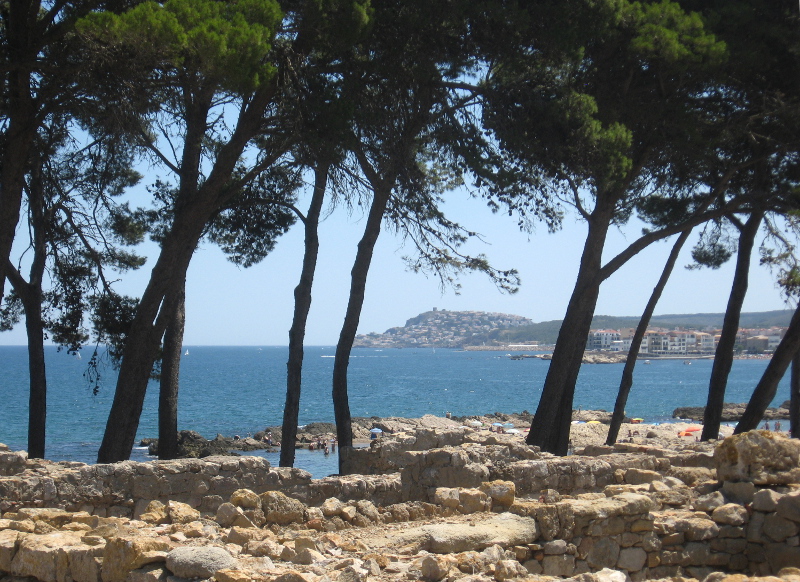 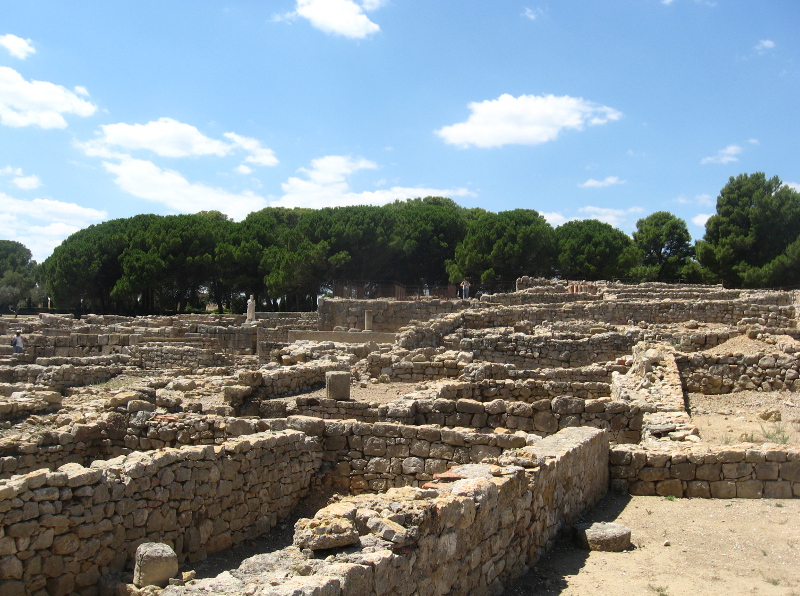 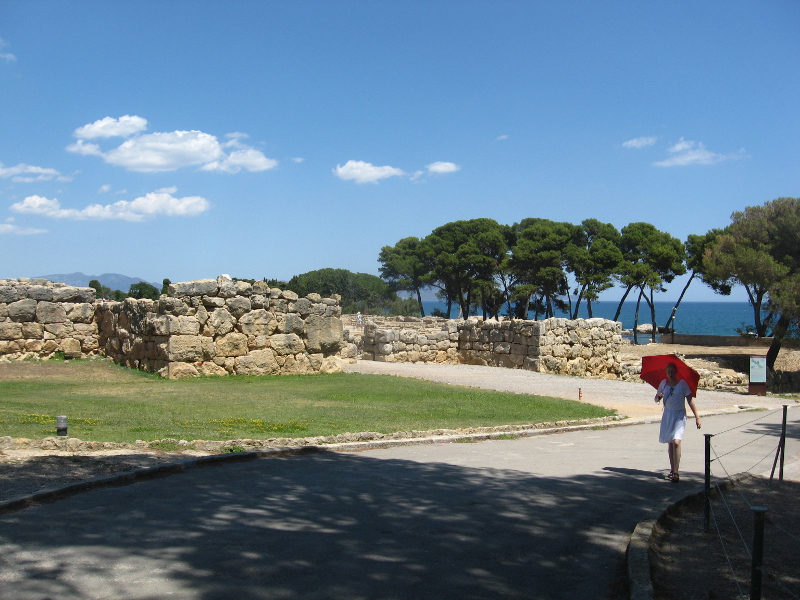 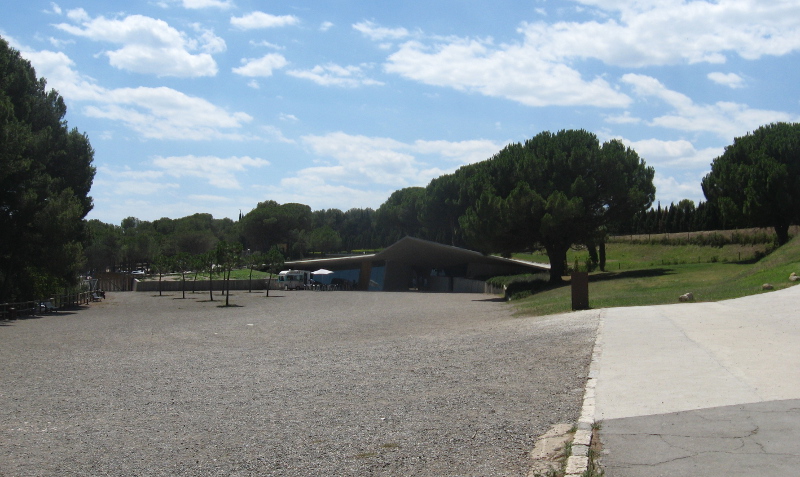 On the outskirts of L'Escala is a tourist office with a small parking lot and some nice palm trees. We parked there and had our lunch in the shadow of one of said palms. 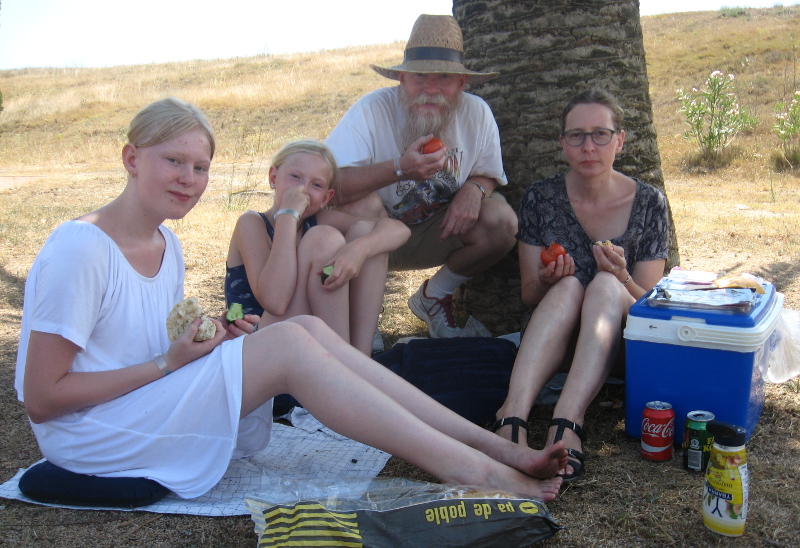 After asking around on the LAF regarding minis to use for the conflicts between theKingdom of Rome, and its Italic neighbours (such as Etruscans, Sabines, and the likes), I was kindly offered a sample from Aventine Miniatures, of their Etruscan range. 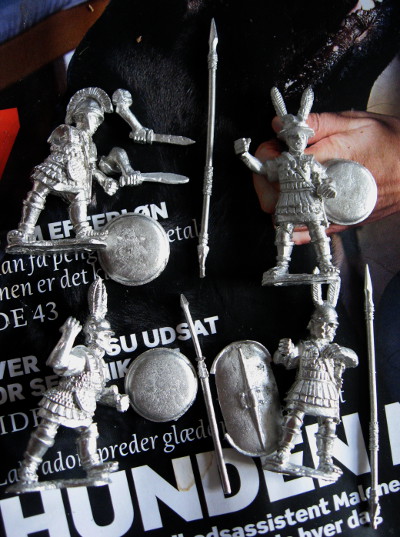 I do not think the photo gives these minis full credit; they are VERY nice, with hardly any flash, only a bit of mold-lines, and very, very crisp details!

I could easily see myself getting some sets of these if I go full in on early Rome - and Aventine also has a range of 'Italian Hill Tribes' (mainly Volscians), which should go along with these.

I really like how (most of) these have the 'feel' of a heavier type of Hoplite, and at the same time pointing forward to the manipular infantry of the Republican/Polybian Roman legion (and its allies).

For now, I shall paint these Etruscans up and use them as 'Auxiliary Legionaires' for a Broken Legions warband I want to create to fight the Argonauts I have on my prepping station at the moment. I am going to represent the actual legionaires by Caesarean plastic legionaires from Wargames Factory, of which I have had a box since they were issued years ago, so the 'outdated' look of the Etruscans will just add to the overall colourfulness of the warband!
Posted by Argonor at 20:16 No comments:

Sellswords and Spellslingers: My First Party

I managed to find the minis I had in mind when building my first  party for Sellswords and Spellslingers.

All of them blocked out with enamels many years ago, I can see I had begun re-basing the wizard for Frostgrave (but never got him finished, as I gave that game up after only a few turns played).

I shall have to do some shading and highlights when I have gotten them all washer-bases with filler and sand/fine gravel, but games will be played before those tasks are finished. 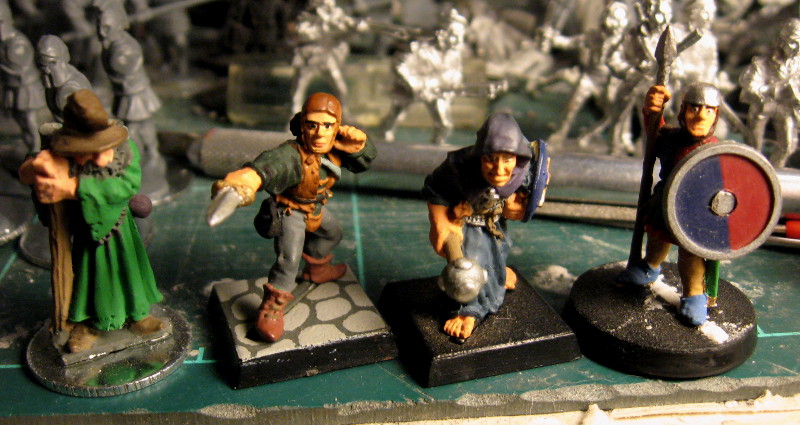 From left to right:


I have also located Goblins, Orcs, and a couple of Trolls I shall need for the first scenario, so now I just have to set up the table and get stuck in.
Posted by Argonor at 23:04 No comments: 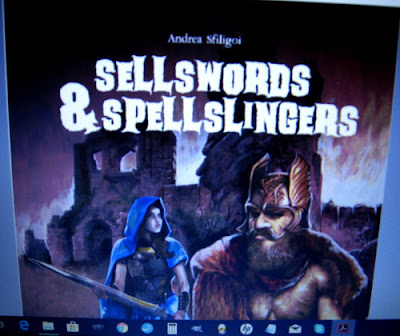 Yesterday morning, I purchased the Sellswords and Spellslingers eBook form Ganesha Games, and read it while excercising on our relatively new excercise bike.

I had to read it from start to end, as I simply could not put it down. To my eye, it seem Andrea Sfiligoi has taken all the best elements from Song of Blades and Heroes, changed or replaced all the parts that sometimes gets i bit frustrating, and created an entertaining and challenging solo/co-op semi-RPG miniatures game.

I have already created my first starting party (each player controls a small party of 1-5 Player Characters, the scenarios adjust to the number of players and characters), and I expect to try out a solo run somewhen during next week.
Posted by Argonor at 21:56 No comments:

Following up on having started to prep some Hoplites yesterday, I have taken a closer look at the Broken Legions rules, and I have decided to compose my initial 150 pts warband as follows:

A grand total of 149 pts and a mere 12 models, of which I have prepped and based half the bodies already, so I expect to have them all ready for primer the week after Easter (I am working Wen-Sun next week, and the kids are home all week, so meager progress is to be expected).

I think I am going to prime them white, as it will facilitate painting all that bronze armour (gold/bronze paints in my experience have trouble covering dark undercoats, which means I shall have to prime them separately from the nappie riflemen I am also prepping at the moment, as I think black primer is the way to go with those.
Posted by Argonor at 17:28 No comments: 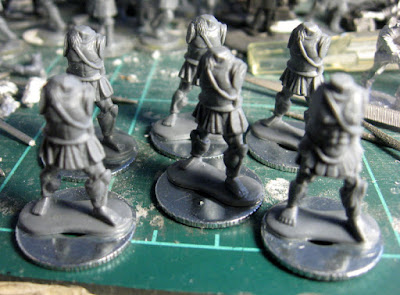 When I was looking for information on the very early Roman military/warriors, again and again I was met with the word 'hoplite', and it prompted me to dig out the two boxes of Warlord Games plastic hoplites (generic Greek and Spartans) I bought second-hand quite a while ago.

A quick look in my wargames library revealed that I can use Greek hoplites for Broken Legions, Of Gods And Mortals (OGAM), A Fantastic SAGA, and A Song of Blades and Heroes, and I decided to start building a warband for Broken Legions (Argonauts) right away.

The standard warriors are called Argonauts, basically heavy hoplites with the option to take a spear in addition to their standard 'hand weapon' and shield. I am going to make nine of these in 'bell cuirass', seven with spear, two with just the sword (there are five in the Greek Phalanx box, four in the Spartan Hoplites - one per hoplite frame).

The guy in the muscle cuirass is going to be the Argonaut Captain, and I have two more destined to become Heraclean Champions.

I shall also add an Orphean Champion (bard/musician) from the Greek Phalanx box, and an additional five 'Mercenary Hoplites' in Linothorax. 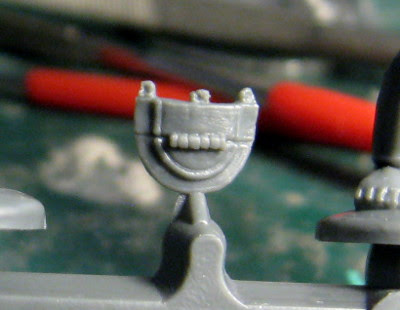 At first, I was puzzled by this component, but a brief research revealed it to be a 'Mitra', worn hanging from the front of a bell cuirass, so I shall probably use a couple of those to ensure some variation in appearance of the Argonauts (they are all the same basic body, arms/weapons, and heads/helmets can be varied a bit).

I am actually quite eager to start painting a few of these, as I have always liked the aesthetics of the classic Greek warriors (and it does nothing to temper my enthusiasm that I can use them for several games I already own).

Finally, I started prepping my Sharpe and companions minis from Brigade Games: 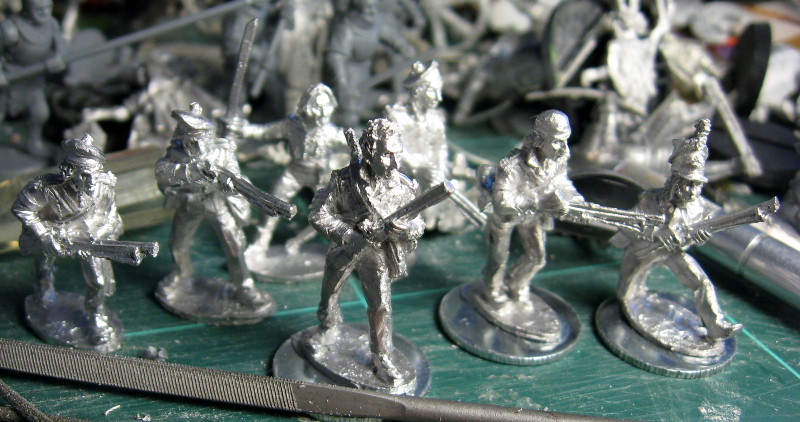 Kevin, my hitherto newest gaming buddy has expressed interest in playing some Napoleonic skirmish (he even purchased the Black Powder Waterloo Starter Box from Warlord Games, so I assume he is meaning business).

I have also talked to my oldest friend and gaming buddy Michael (with whom I have spent endless hours gaming 1/72 Naps) about it, and he seems interested, too.

We are going to start out with only a handful minis each, playing Song of Drums and Shakos from Ganesha Games, then probably add the odd couple of reinforcements then and again, until our patrols grow too big for SDS and we have to move on to some other rules, like, for instance, Sharp Practice.

The reason I have only gotten three of the minis cleaned and glued onto washes is that I am working on another project parallel to this (talk about going from complete hiatus to overdrive...), and I shall post about it a bit later this evening.
Posted by Argonor at 17:01 No comments: