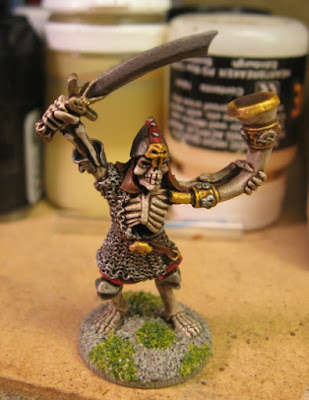 At the same time when I washed my plastic skellies, I also finished the repair job on this guy by washing his hand and sword in Agrax Earthshade.

He has now been placed back with his unit in my Skeleton Army Box - which, by the way, is going to have to be complemented by a second one, when I have finished the unit(s) I am working on (my Skeleton Infantry is going to take up an entire box by itself).

I am sending out feelers to get a game organized, and hope to get one scheduled before the end of the month, but we shall just have to see... Ulolkish/Duregar is busy renovating his flat, and then he will probably need another month or so cleaning and decorating his recently acquired house, and Kevin spends a lot of time renovating his house (I think he and his wife/girlfriend bought it last year or 2015, and by his own words, it will take him years to get all the projects he has in mind finished), so gaming may prove a bit scant this winter.