Gaming must be paused!

Well, to some extent it must... I've been laid off at work (my current employment ends Jan 31st), and I must focus on finding a new job, so we can keep our house and our kids will not have to change school, etc.

So, if anyone on Funen reads this, and knows of a possible opening somewhere, please, don't hesitate to contact me!
Posted by Argonor at 08:47 No comments:

In the Emperor's Name (ItEN): Another test game

Had a nice 3-way rumble last night(Dark Angels vs Chaos Marines vs. Space Wolves 13th Company). Got wiped out, again, but I actually managed to hold on to the objective for about one turn ;o)

No pics, sorry, shall bring the camera next time, if I remember to.

And another club member owning some IG seemed interested to join the fray. I am confident that the campaign will consolidate ItEN as a good alternative to playing full-scale W40K when you don't have the time to prepare and play the full monty.
Posted by Argonor at 13:59 No comments: 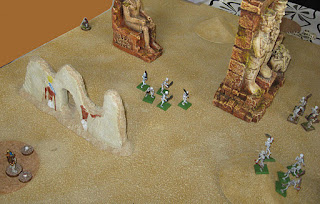 Well. it's been a while since my last post in this series, but now I have to bring this to a conclusion, soon.

Hearing the incantations from the ruined mastaba, Thrombur decided that it was time to prove the maxim that 'Dwarves are deadly on a short distance', and sprinted around the temple ruins to outflank the staggering Skeletons.

Thus robbed of his companion, Chwllurhwch succumbed to his assailants, and the Flesheaters started squabbling about whether to feast on the fallen Elf, or present him to their Master. 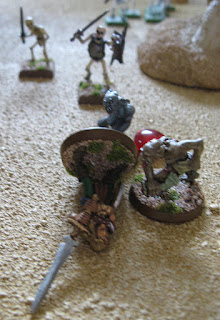 (Had the Heroes been played by each one person, this development might have caused some bad blood, but being a Dwarfanatic, Ulrik decided to go all in on Thrombur, sacrificing the hitherto rather unfortunate Elf.)

Soon, however, one of them started wondering where the other intruder had gone, and started searching for him.

In the picture below, it is hidden behind the palm trees and the Anubis statue.

In the lower left corner, the Mummy King can be seen preparing yet another skull for the Magic Circle. But Thrombur is closing in, and the minions are perhaps too far away.... 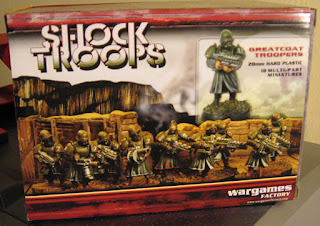 I'm looking forward to dig into the contents of this box, that's for sure!

And WF just released a Heavy Weapons box for these... hmmmm.....
Posted by Argonor at 13:18 No comments:

In the Emperor's Name: Eldar 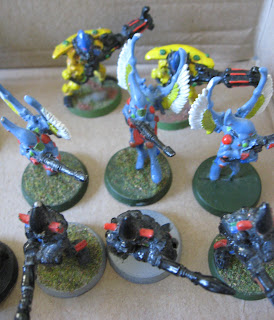 I bought these on EvilBay to supplement som Guardians I already have, so I can field a Craftworld Retinue (which I still have to construct).

I am going to use them more or less like they are (except for the unpainted Scout) for now, so they won't figure on my Painting Tally (this is the reason why painted minis count only .75 - sometimes I bring out an old mini and alter it, thus 'finishing' it another time).

They are not fantastic paintjobs, but nice old mins, and I like my Jes Goodwin sculpts!

The cowled Scout will stand in for a Warlock, until I can get my own painted, but right now it's about getting some minis ready for The Chaos Tablet without spending too much time on it! 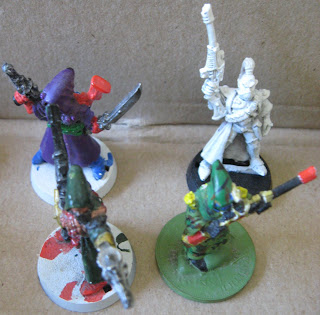 I really look forward to running the campaign (I always have had a GM inside me), as it will - hopefully - provide some good games in an intrigueing storyline, and will also prepare me for running a LARP campaing for junior-members as of spring 2013 (yes, I plan ahead!).

With any luck, The Chaos Tablet will also be helping to alter the mindset of the wargamers at the club, so they will no longer see GW-rules as the one-and-only answer to wargaming needs.

I shall NOT be following the campaign closely on these pages - I shall have plenty to do at the club forum when it starts, but I may post some pics and a short description of this and that encounter, you'll never know.
Posted by Argonor at 12:56 No comments: 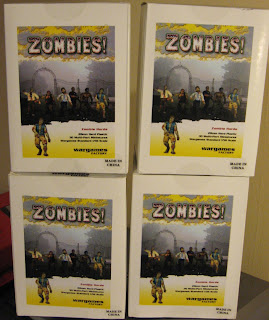 Some will argue, that even considering ordering these is scary in itself, but I had to act quickly, as some guys at my club got infected by the Z-virus after a demo of Fear & Faith earlier this year.

Only 60 of these are for myself, though, And I'm only even going to paint 30 of them.

A fellow gamer at my club who's a student, and thus has little cash, is going to paint up one box for me, for which he'll receive 2 of the boxes.

I have assembled the first batch of 10, and now need only to fill the bases and prime them, then they can go away to be painted, while I assemble the next batch. 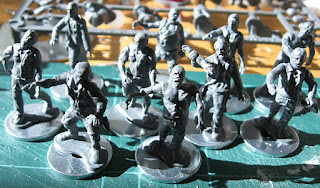 As soon as I have send 30 in commission, I'll franticly continue with my next box, and as soon as my club buddy has finished 30 for me, he'll get the first box for himself, to finish before getting the second one (that's part of the deal - he has to get some of his own shamblers ready for club games!).

There has been a lot of criticism about these figures. And, yes, some of it is quite fair; there IS soft details on some parts (feet/shoes and heads in particular), but arms/hands and most of the torsos are nicely enough done (especially considering the price). Biggest issue is the joints where parts has to fit together, but I trust the primer and base coat to somewhat even out the 'fissures', as I cannot justify using time for greenstuffing and the likes on these cheap fillers. They are going to be speed-painted, anyway, and if something turns out completely wrong on a mini, I can always go back and mend it more thoroughly, somewhen in between games.

When these 120 zeds are done, I'll return to painting some metal ones (and other minis), but we will then have somewhere between 200 and 250 zombies  between all the participants in the project, to populate the tables in our club campaign. That MUST count for something, too!
Posted by Argonor at 12:29 No comments:

In the Emperor's Name: The Chaos Tablet 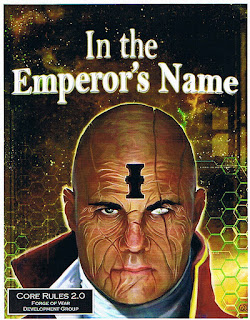 I am starting a narrative campaign at my club (Skjold in Svendborg) that I'm going to orchestrate through the club forum.

I played a game last Wednesday, and as expected (apart for us having to look up rules a lot of times), the game flowed flawlessly. We played a simple fight, no objectives, just a merry shoot-out, which I lost spectacularly by rarely rolling above 3+ for my grit-tests. I bigger games and over time, this should even out, but I'm not convinced...

We're having another test-run tomorrow, probably with multiple retinues on the same table with a simple objective.

I am doing a Roll Call at the forum atm, trying to assemble 4-6 WQ40K players for starters.

There will be an 'official' bulletin at the forum for everybody to read and follow, while I'm going to secretly brief every single player thorugh PMs and/or emails while telling them, whom to set up a game against; sometimes we'll even arrange a full scale battle of W40K to determine the couse of the story, and I'll listen for results of non-campaign games and sometimes incorporate them in the events.

More later.
Posted by Argonor at 12:00 No comments: