I Have not done a lot today, as I have not been feeling all that well. Maybe a cold or flu is announcing its arrival, I don't know. Never the less I have made some small steps of progress, which will be recorded this afternoon/evening. 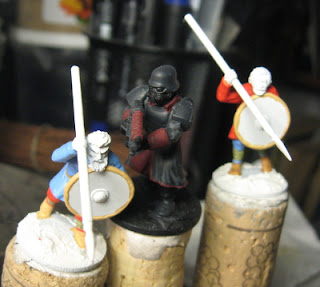 These two guys have been sitting half done in my painting zone for ages, and with my Skeleton Horde double sub-project almost done, I thought I would plan, how to get them moved forward (and some space cleared on my cork-holder). Never mind the WGF Greatcoat Trooper.

I am now planning to get two points of Viking Warriors ready for SAGA, and as each point consists of eight models, I dug out six more from among my prepped and primed Dark Ages models, so that I can work on an entire point.

These were prepped before I started filling out the holes in the washers under the minis, so before doing anything else, I mended that on the six models below, now drying. I may have to do it on the two partly painted warriors, too, I do not remember if I did so before sticky-tacking them to the corks. 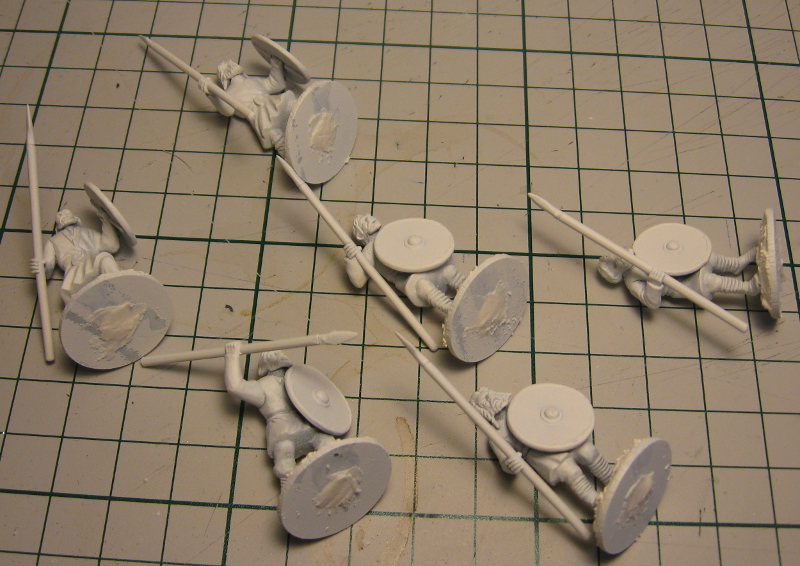 These, of course, are not exclusively for SAGA - they will see action in Blood Eagle (bolstering the ranks of Sigurdr Krage's warband), God of Battles (Dunlending allies for an Isengard, part of a Thousand Tribes army and/or the start of a Blood Gorged/Viking army), a Viking warband for Of Gods and Mortals, and a Wild Tribes warband for A Fantastic SAGA (tecnically, also SAGA; yes, but still).

Possiblities are Legio, and I look forward to getting a selection of these ready for the table!