A friend of a friend declared on Facebook that she would like her allotment garden horse reddish bed cleared - and as I have been wanting to grow my own for a while, I offered to remove the offending plants for her. 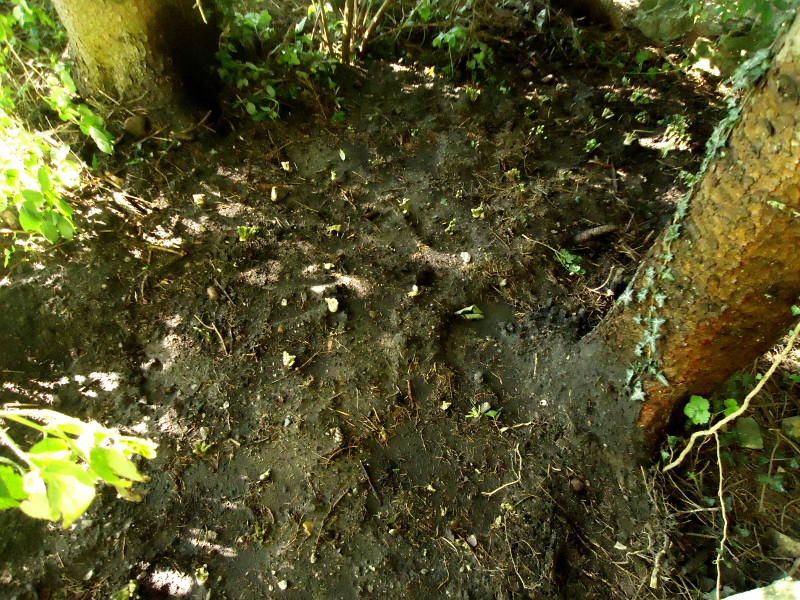 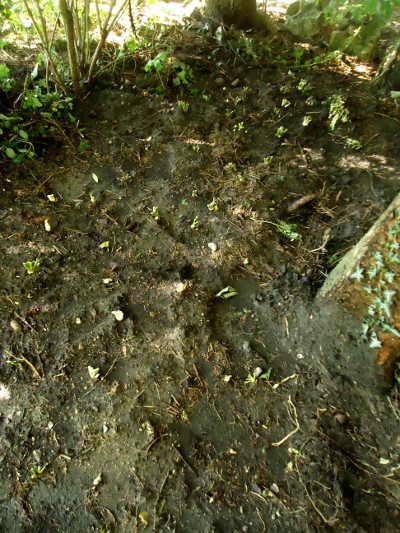 It may not be easy to see in the pics, but I planted about 30 individual roots (I removed the green tops before planting) between the tall spruces standing between the veggie garden and the creek.

For a while, I shall have to water them every day that it is not raining, and I hope that at least 1/3 are going to survive and start spreading offspring, as I love horse reddish salat, horse reddish sauce for old fashioned roasted beef, and plain grated horse reddish topping for traditional Danish rye bread open sandwiches with a variety of meat spread.

Normally, horse reddish is very hard to kill, so I do have my hopes up for this little project!
Posted by Argonor at 22:58 No comments: 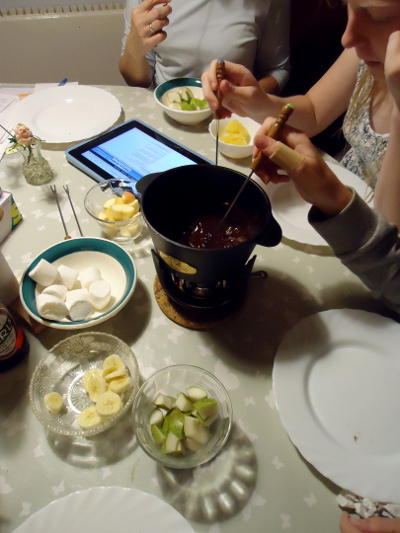 A couple of weeks ago, I noticed two fondue sets in the local Red Cross  recycling store, at about 1/10 the price for a new one, and I promptly purchased both, as I know my kids love cosey food (I have to get out the raclette barbeque set somewhen soonish, too). The following weekend Anna was busy packing for her school trip to Berlin (all of last week), so I had to wait until this weekend  getting one of the fondue sets in use.

This time, we used it for dessert - found a very easy recipe for chocolate fondue (250g chocolate and 4 spoons of cream, heated in a water bath, then placed over a tea light when served - could not be any easier, right?), and meanwhile my wife and Lea prepared the fruit and marshmellows for when Anna had finished her shower.

Everything was eaten, but the next time we probably shall have to make a small portion in the other pot, using milk chocolate, as Anna is not all that fond of the dark kind.

Lea had a school friend sleep over on September 1st (her parents were at some party or likewise for adults only), and we seized the opportunity to play a four player game of Euphrat & Tigris. 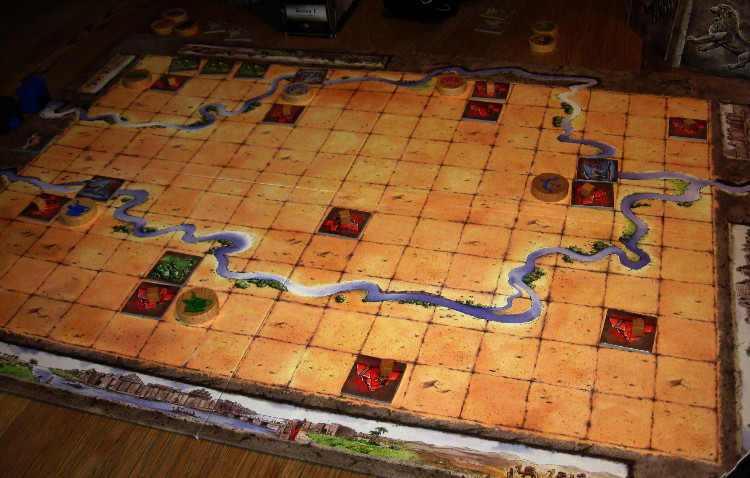 The kingdoms quickly spread throughout Mesopotamia. 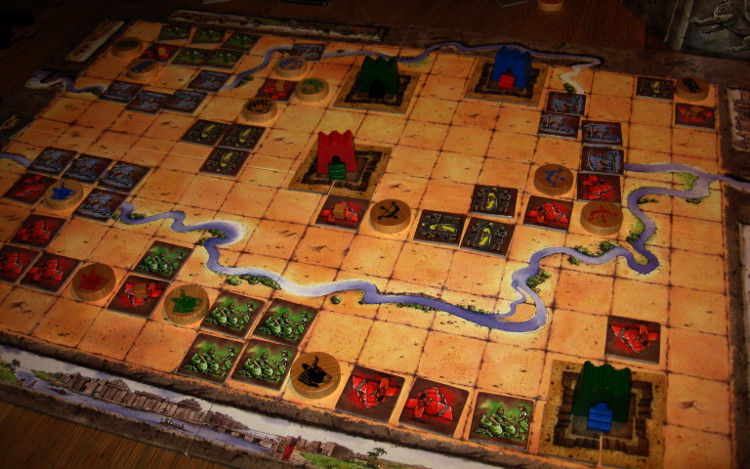 I never controlled very large portions of the board (played the Bow dynasty), and during most of the game I was certain that I was way behind Lea and Anna, but in the end it turned out I won by a comfortable margin - I think it must have been due to me focusing on having my Leaders getting bonuses from the monuments, because it felt like I was having the living daylights kicked out of me... 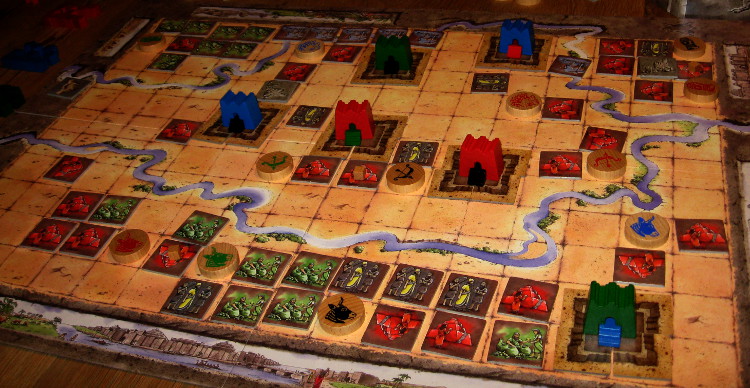 It's a Jungle Out There!

We pretty much got all the firewood stacked this afternoon, so I felt that I could justify spending time on getting a jump start on the next batch of jungle bases.

Tomorrow, I am going to make some more of the 'fillers' for the DVD holes, as I have used all those I previously covered, and I still have a bunch of palm trees to use, before I get some other types of plastic trees to add to my expanding jungle... 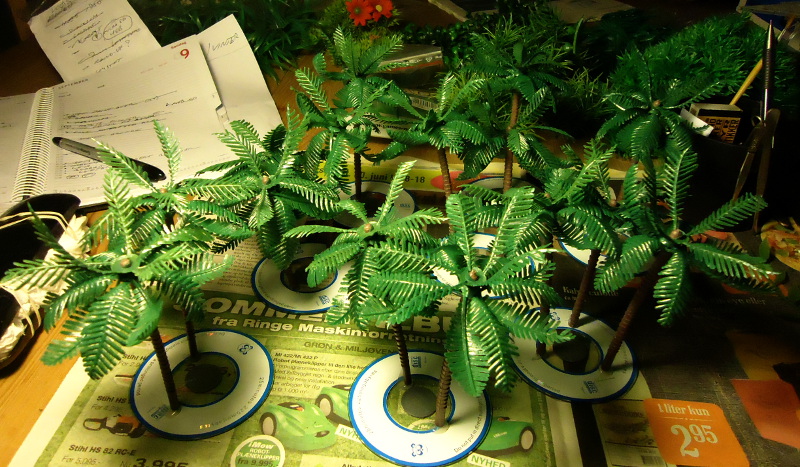 My hitherto longest complete print, about 26 hours from start to finish, at resolution 0.1, speed 30mm/sec, and advanced bridging settings on.

Of course, I also have to print a door, but it will have to wait until I have printed some more desert building, and have a reason for changing filament.

I think it really pays off to allow for longer printing time - and it also paid off that I took the time and money to purchase different colours of filament, until I found the right hue for this kind of building/terrain. This way I can use the printed buildings right away, and texturing/painting can wait, without deducting notably from the visual impact. 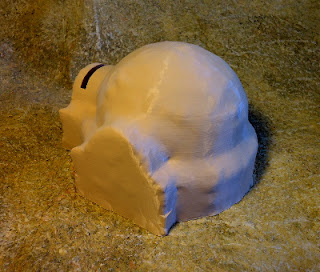 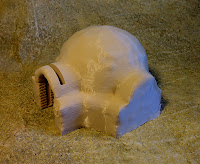 I am very pleased with this print, and it makes me want to try printing with a smaller nozzle, for even finer resolution - but that is for somewhen in the future; right now I just need to churn out a sizeable collection of desert and jungle terrain (I am going to start some more jungle bases next week - too much else to preoccupy my mind this weekend, as we have to stack five cubic meters of firewood I got delivered Tuesday morning, and just managed to get into the shed yesterday evening, in time for the deluge we are experiencing since abour 2 am, and I am going to something called the 'Tie Party', a celebration for gents only at the local inn, being held as a pendant to the ladies only 'Hat Party' which is tradition on the weekend before Egeskov Fair, Saturday afternoon.

I am currently printing a Tatooine storage building with floor and removable roof, expecting it to finish late this evening.
Posted by Argonor at 11:49 No comments:

Star Wars: Unboxing the Spectres - and Then Some 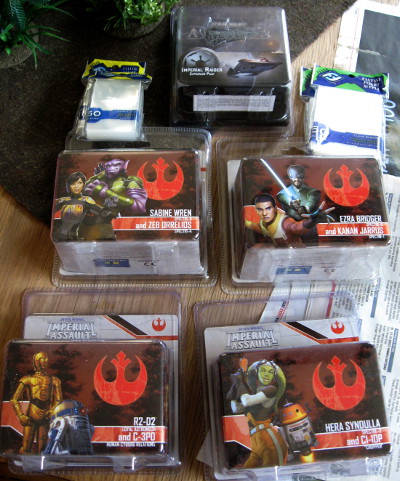 Yesterday, I received my latest order from Hyggeonkel, and set about unboxing everything right away


Why Imperial Assault, I hear you ask; simply because I am probably going to buy that game in a not-too-distant future, and I really want to be able to use the Spectres (also for other games like the upcoming Galactic Heroes from Jake Wiley, and perhaps a sci-fi version of Sellswords & Spellslingers), - and I have a standing invitation for joining an Imperial Assault group this fall.

Well, the first clamshell I cut open with my lightsaber (pair of scissors) contained everybody's favourite pair of droids.

I included R2-D2 and C-3PO in my order, simply because they are available. No Star Wars collection is complete without them, and they are an obvious choice for complications, objectives, secret missions, and other ideas for spicing up scenarios.

I have NO idea about the rules, yet, but I expect to have a clue after my first evening playing the game.

Note the two Deployment Cards for R2-D2 - that concept is really puzzling me! 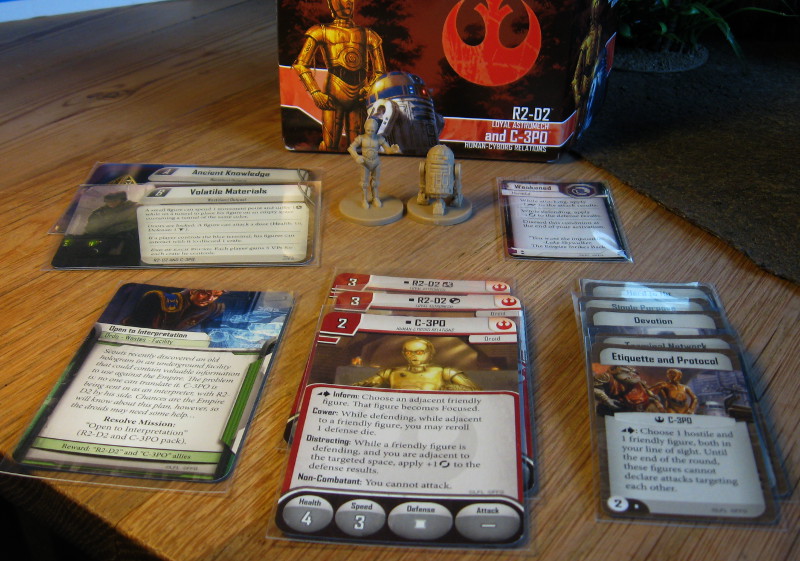 Next up was Spectre 2 and Spectre 3/Chopper; Hera Syndulla and C1-10P - simply because I was in the mood for more droid, and a getaway pilot is always handy! 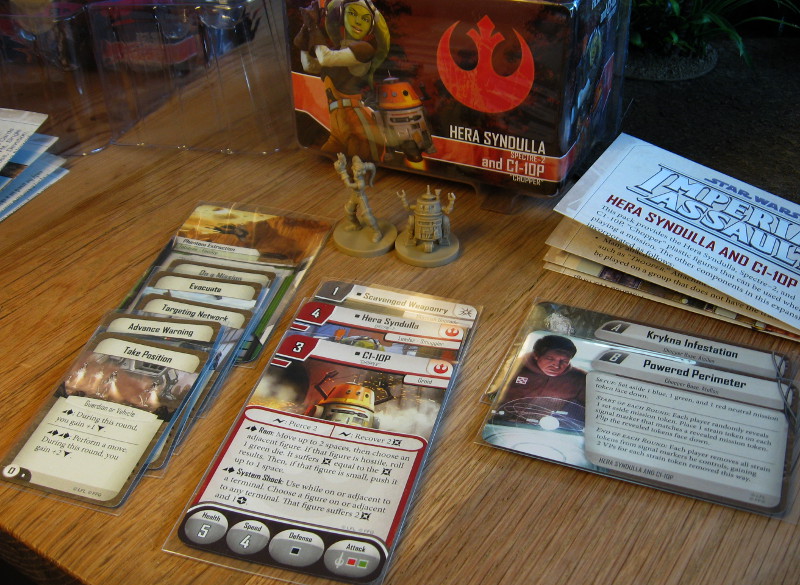 I would have preferred to start with an earlier version of this pair - Kanan with his eyesight, and Ezra with uncut hair, as seen in the earlier seasons of Rebels, but I guess you cannot have it all... 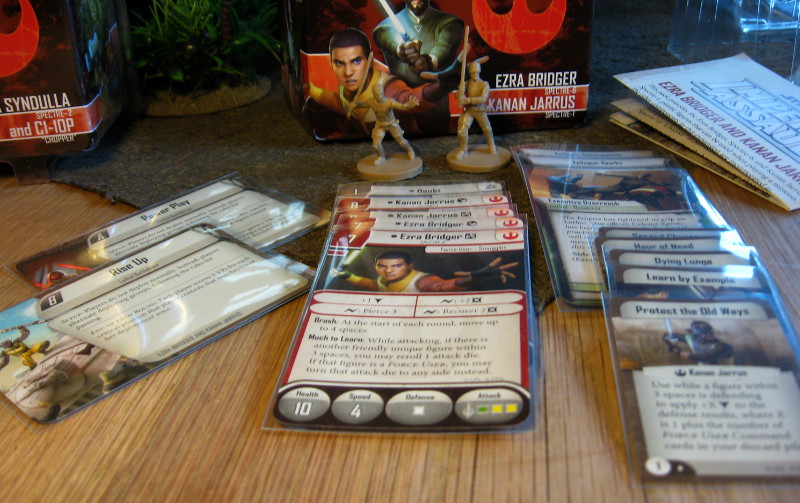 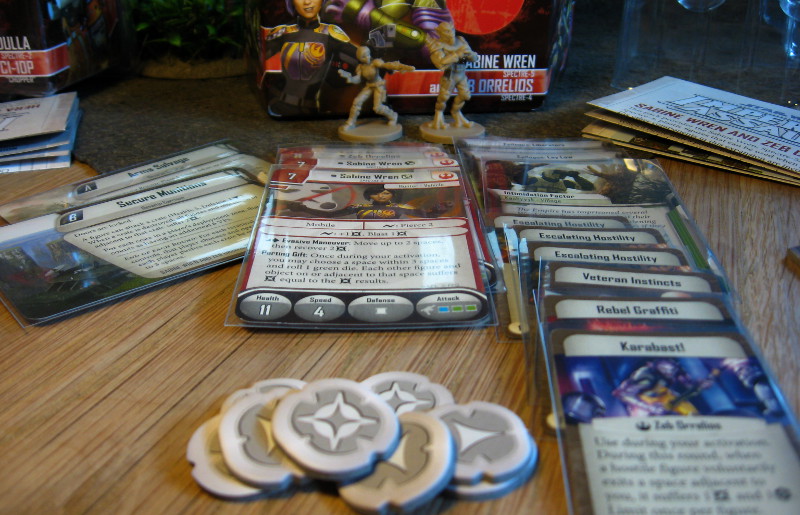 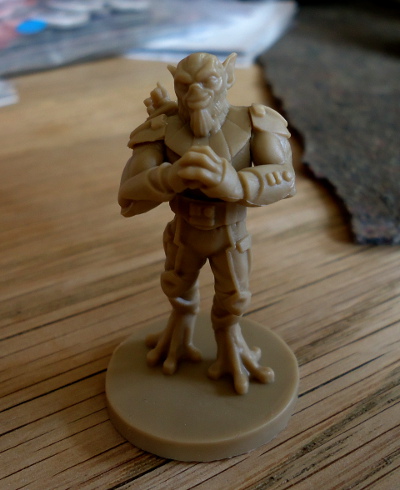 Sabine is one of my favourite female Star Wars characters, because she is displaying such a complex dual personality; the artist, and the crazy pyrotechnician. That, and because she is tagging the phoenix that is turning into the emblem of the Rebellion.

Zeb is the brawler of the group, and although the knuckle-cracking pose is often seen, I would have preferred a more dynamic one for gaming.

Once more, I just have to settle for what has been made available, but I really hope FFG makes another pose for Legion, should they decide to add the Spectres to that game!

All in all a nice haul, and I am looking forward to getting some of them painted and used in a game (I also plan to mock-up some stats/rules for Legion, so that I can play covert ops/sabotage missions/fuel and food raids, and other scenarios as seen in the Rebels show.

Finally, a 'family photo' of the entire group in front of some of my recently completed jungle bases (and 3D printed giant tree trunks).

I shall probably paint up Hera and Chopper, first - as pilot and astromech of the Ghost, they are indespendable (and may fly missions on their own, which is also a good reason). 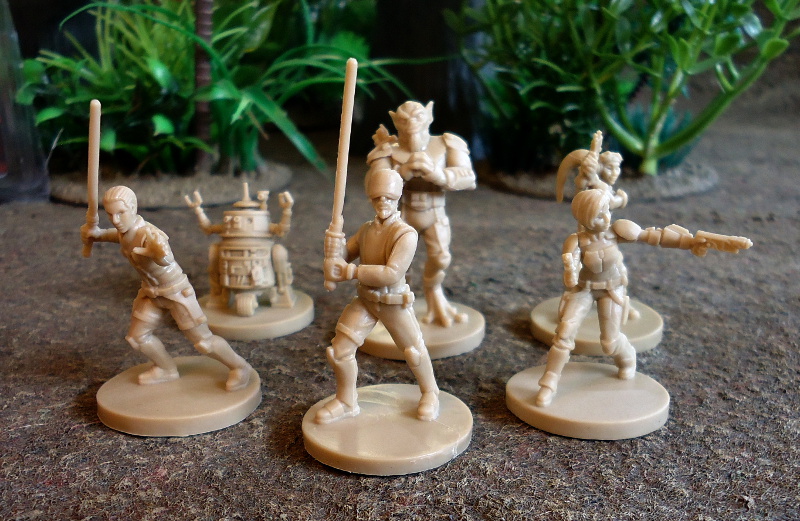 I finished the last couple of the jungle bases just the other day, but did not get around to snap a few photos until this evening. 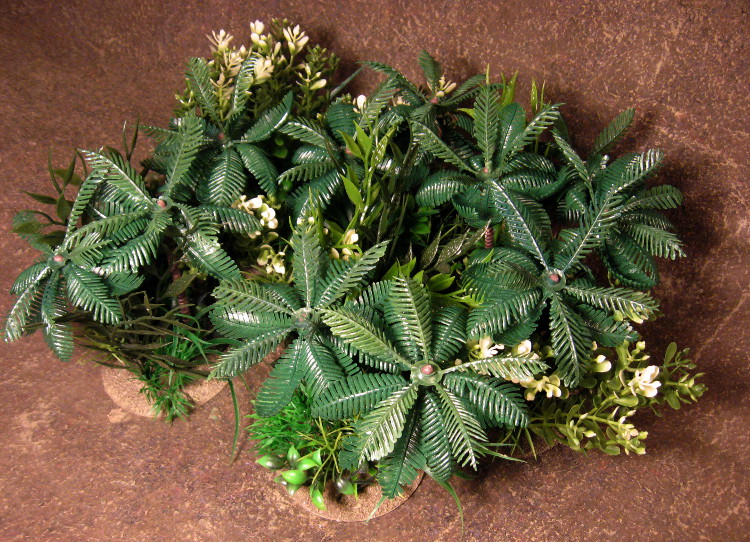 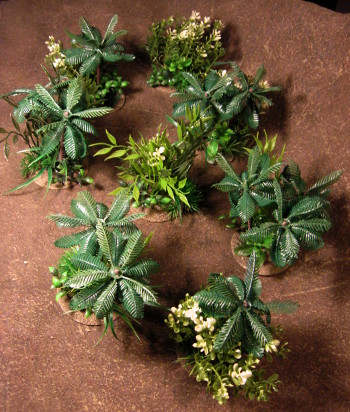 I think they will do great for various games set in a tropical jungle environment - from sub-saharan Africa over India and Indo-China/'nam to the Amazonas, and many worlds in a galaxy far, far away, as well as terraformed Venus, and Catachan and other Death Worlds, and Deadzones.

Below you can see the recently printed giant tree trunk placed among the jungle bases, and although in real life, rain forests probably do not have that many palm trees, I think the illusion is going to be great!

Couple more of the tree trunks printed, based, and painted, and I shall have to make some more jungle bases - which is fine, as I want to end up being able to cover at least 50% of a 6'x3' table with vegetation.

Well... that is the plan, for now, but as always, I may get sidetracked by the next shiny object crossing my path... 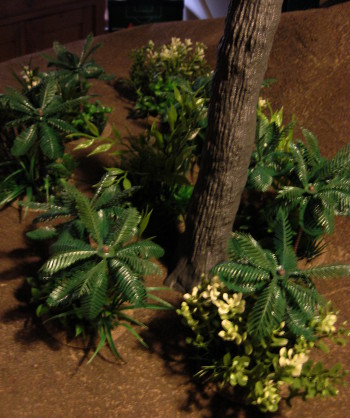 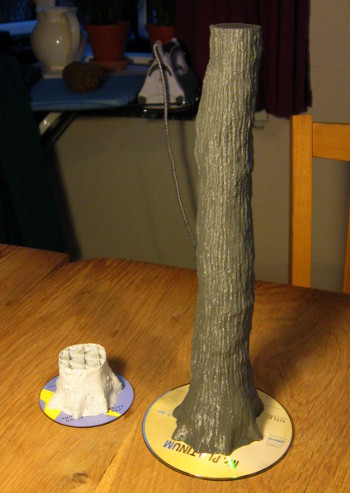 Yesterday and today I was printing two 30 cm. tall tree trunks  - or so I thought!

When I entered the hobby room after dinner today, the hotend was drawing lines above an unfinished stump, and it was soon obvious that I had a severe filament clog.

It took me over half an hour to get the filament flowing (changed the spool back to the darker grey which worked fine yesterday, just to make sure), and now the printer is up and running once more!

I am planning to start my largest print so far, either later today or tomorrow (est. 27hs 19ms); the upscaled (575%) X-wing escape pod for all kinds of Star Wars settings (and a certain pair of droids to get away in).

Smaller pieces to populate the Star Wars Legion table printed so far (the Imperial bunker and the power-thingies not included). Everything off Thingiverse.

Currently printing a 30cm redwood (jungle/Endor), and when it finishes this evening, I shall have to change filament to a lighter grey for printing some additional commission pieces for Imperial Assault.

Later this week I shall try my largest print so far, an escape pod, scaled up from a Thingiverse X-wing scale model (I ordered C-3PO, and R2-D2, yesterday, and am going to make a large dune with an indent for the escape pod, so I can stage an Ep. IV Tatooine display). 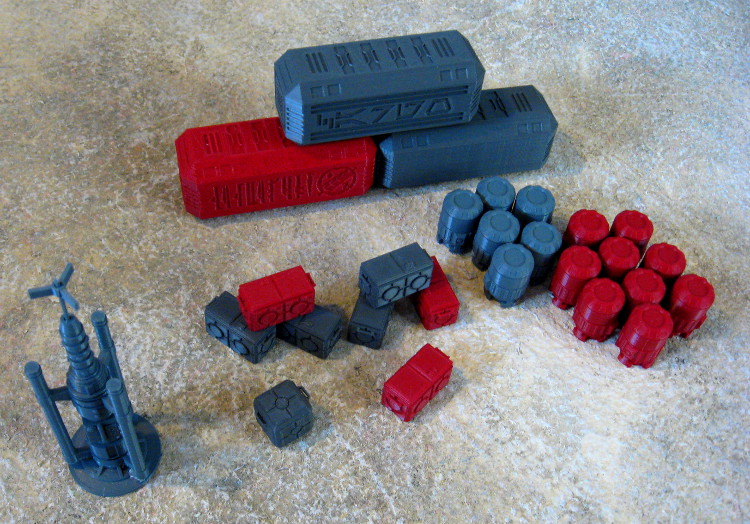 I have been working at a 3x3 (approximately) test piece painter's felt desert mat, as I am going to make a 6x3 Tatooine mat for Star Wars Legion, and I wanted to start out with a smaller one that can also be used for smaller games like Pulp Alley, Strange Aeons, Sellswords & Spellslingers, etc.

I started out by painting some patches in various earthy colours; red-browns, light terracotta, khaki, etc., an drybrushed them with Buff Titanium. I did not like any of the results, as they turned out way darker than intended, and I decided to paint the entire mat with Buff Titanium, ending up giving it two coats.

I then mixed some white and Buff Titanium and drybrushed the entire surface, and I think it turned out OK, As you can see, the (used) felt had some wrinkles, and I should probably have ironed it before painting, but I wanted to get stuck in right away, and - hey - with some terrain pieces on top, the wrinkles should not be all that noticeable! 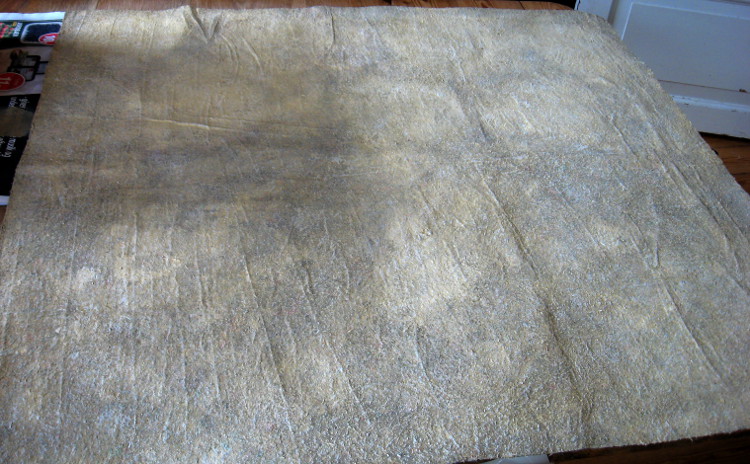