Not much progress at the moment, as most of the time I'm sitting with my right foot elevated.

I strained my ankle Monday afternoon, stepping on a log while I was using my chainsaw to cut up some trees I felled in our back garden (they were shadowing the vegetable garden).

Well, well, lesson learned, I guess... always clear the work area along the way!
Posted by Argonor at 11:03 No comments: 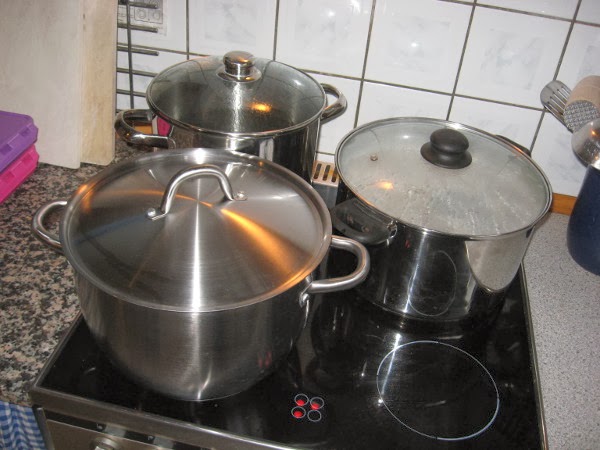 I am preparing the second half of my second brew, while I'm enyoying a small glass of the first. Mead is a drink for gods!

10 liters of water, each with a bit less than 3 kg honey, and an extra pot with water to fill up the fermentation tank, should the honeywater not be quite enough.

A fourtnight ago, I made a yeast culture the evening before I boiled the first half of the brew, and it has been bubbling away ever since.

Producing mead is a very easy process, you just have to have the patience (which can be hard, when you've first tasted the results).

Some day, I'll get my recipe translated and put up here, somewhere, for any interested parties to try out as they wish. 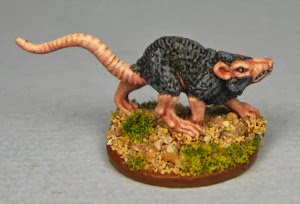 I finished painting this little critter (actually the size of a St. Bernard). I didn't want to post it in the LPC, as it would be the second in a row, but as I need it for my Cult de Ghouls for VuK, I had to get it done while I still had the Secret Fire running in my veins.

As you can see, I painted a more realistic snout on this one (and I actually also redid the snout on the first one to match). 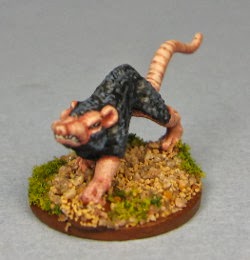 Happy Birthday to Me... 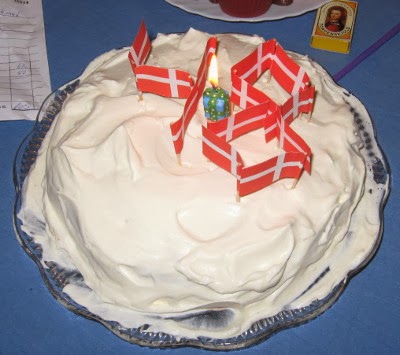 This cake, as decorated by my eldest daughter, tells its own tale of ageing...

Fortunately, I have plenty of homebrewed mead to make the day bearable ;o)

My daughters also baked chocolate muffins for coffee, so we had plenty of stuff to eat when I returned from 8 hours of work. 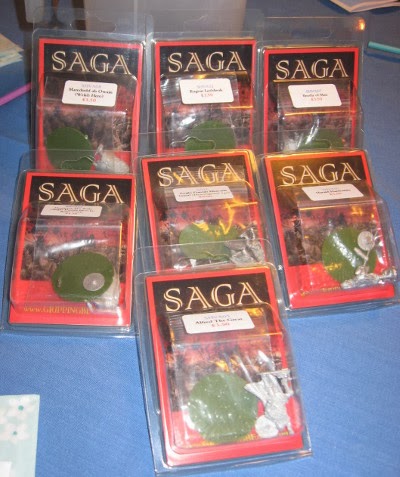 My youngest daughter had sewn me a felt spectacle case for my reading (or painting) glasses, while the eldest had bought me another assortment box for my X-Wing and Attack Wing stuff.

My wife gave me 3 t-shirts, and this assortment of SAGA minis. 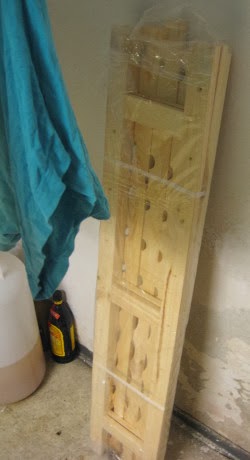 My in-laws gave me this, to store these 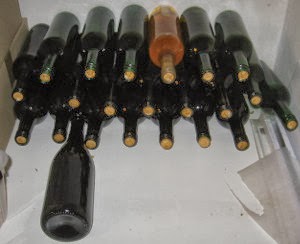 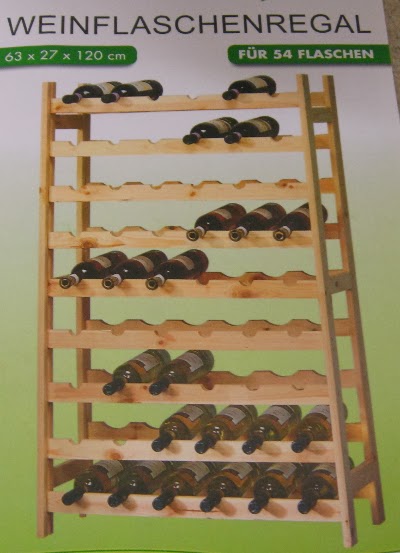 This coming weekend I'll be brewing the second half of my 2nd batch of mead, and visiting an exhibition at Nyborg Castle showing one of the world's largest private collections of LotR Trilogy movie paraphernalia with the kids, so I won't have much time for assembly, but there'll be other occations for that! 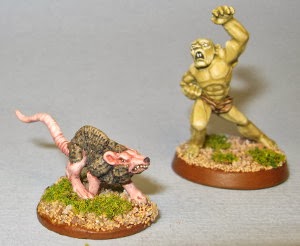 Got this little blighter finished today.

Pic seems a little over-exposed (or just taken with too much light, which I don't understand, as I used my usual setup).

The mini is a Warhammer Quest plastic rat.

I realized after painting it, that the snout should have been all pinkish, and not black, I may correct it alongside painting the next one, which I hope to finish by the weekend.

When the second rat is done, I only have to paint 2 degenerates, and I'll have the Cult de Ghouls I've planned for Von unaussprechlichen Kulten. I then still have to put a little more paint on the Cult Leader for the Dagonites (Pulp Figures Crimson Scorpion) that got stalled some time ago.

I expected to finish my Death Cult second, but the LPC is still running, and it was a great oportunity to get some monsters painted up. 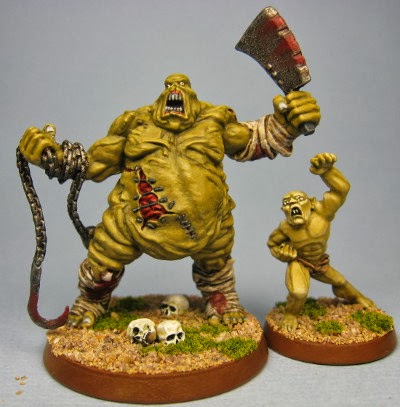 This guy took up all my hobby time for the last 11 days, so I'll just  let the pics talk for themselves for now.

This mini is a large guy on a 40mm base, so he counts as 2 finished minis for my tally. Only fair, methinks - I even put a little something on his base for decoration, which I'm not in a habit of doing... 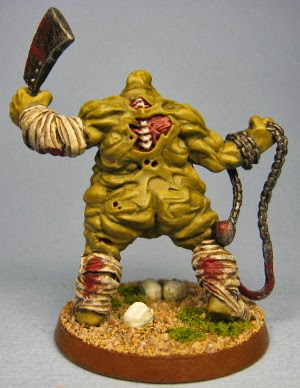 I recently remembered having seen some not-aliens (of the 8th kind), and had to ask around at the LAF to track them down.

They are not spitting images, but they are close enough to represent sub-species and be used along Leading Edge's OOP licensed ones, the OOP Horrorclix Aliens, and/or the upcoming licensed AvP minis from Prodos.

When I have gotten my PSZ project off the prepping table, and a few handfuls of modern zeds done, too, I may go back and get my two boxes of Horrorclix Aliens (and the queen) ready for some bughunt gaming - I'll probably be assembling my Kickstarter Battle Systems Sci-Fi Modular Terrain at about that time, too, which should be just purr-fect for that kind of gaming), and I could easily see myself using some of those ERM aliens for this purpose: 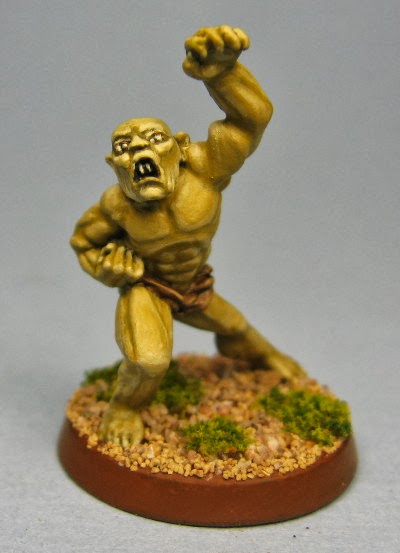 Finished this today (it had been sitting around primed for several years), for the LPC at the LAF. 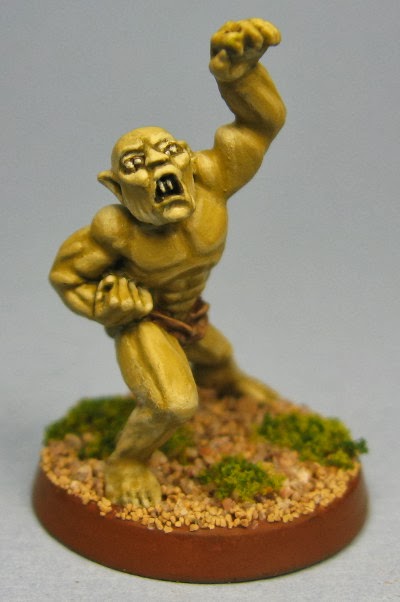 
I have begun painting the Malifaux Killjoy figure to use as a Ghoul King, also using Foundry Moss, but keeping him in the darker shades, and thus my Cult de Ghouls for VuK will soon be ready to square off against a Dagonite Cult.

Can't wait to try this spin-off of Strange Aeons (and the ghouls will be very useful against Treshold, too!!) 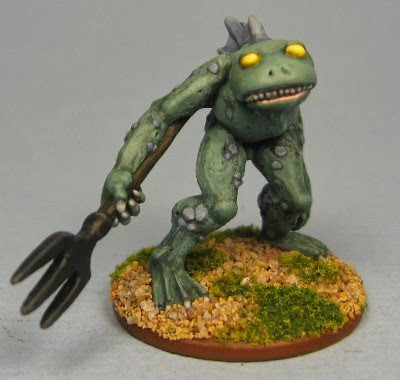 Finished this guy for the LPC:

Colours didn't come out quite as I thought they would,  but I almost used up the base colour for lighter mixes, so I have ordered a couple of pots more, so I can have more shades...

Skin was painted with a base coat of CdA Green Grey, then built up with more and more white mixed in. My skin painting skills are a bit rusty, it seems...

Fin and scales are VGC ShadowGrey, layers also with white mixed in. It's not as blueish as I thought it would be - the next one will see the use of CdA Shadow Grey, as I hope it has more blue in it.

Trident shaft is OC Graveyard Earth mixed with black, then 'grained' (which can't be seen in the pic, as the contrast between base coat and grain is not sufficient) with Graveyard Earth.

Trident fork is a cvery dark, almost black, grey, hightlighted with a slightly less dark grey and finally with a medium grey.

Claws and teeth are medium to light greys.

A new month sees a new painting club at the LAF: http://www.lead-adventure.de/index.php?topic=62948.0, and I'm busy prepping some minis I've had in my possession through strange aeons ;o) 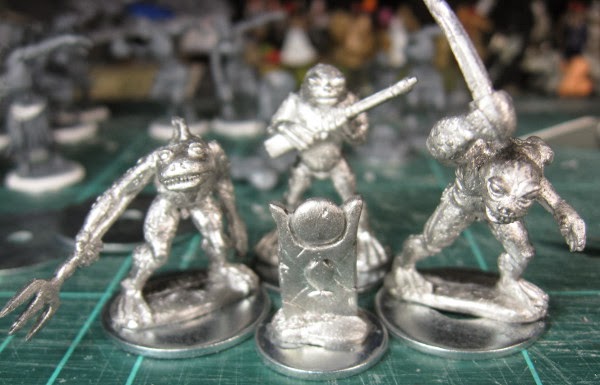 The theme is Mythos Creatures, so I thought I'd expand my collection of painted minis I can use for my Dagonite cult in the making.

In addition to the Deep Ones above, I have another pack of 3, and some primed ghouls that also fit into the theme. Should I finish all of them, I have a set of Summoned Tentacles, and a Gross Anatomy that I can assemble and paint, too.
Posted by Argonor at 22:37 No comments:

Been busy in the workshop, today.

First, I did a lot of tidying up, moving a lot of little bags and boxes containing screws, plugs, bolts, nuts, etc. to the kitchen where I am sorting that kind of stuff into littel drawers and attaching lables to them.

I then fastened my new vice to the workshop table: 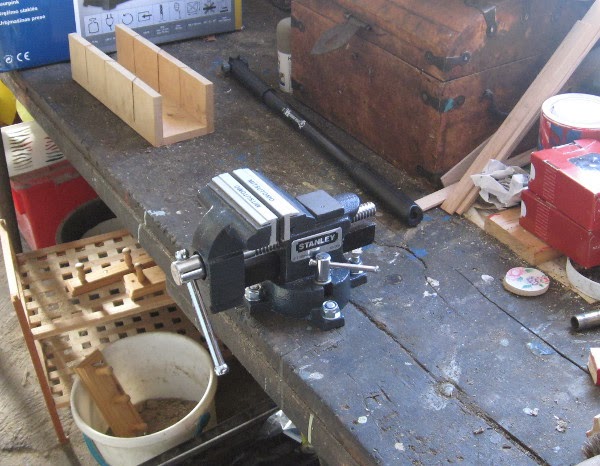 Then, I put some nails in the wallboard, to make my torc screwdrivers a new home: 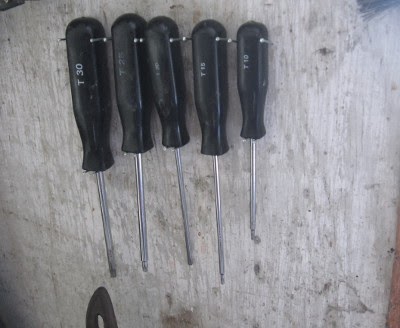 It's not perfect, but WAY better than having them laying around on the table!

My final effort was to assemble the press drill I got for Christmas.

It took quite some time, but I really wonder, what it would add to the price of power tools, if they were assembled at the factory by skilled people who know exactly where everything goes.

Well, as of today, I am the happy owner of an operating press drill, and a workshop where it's actually possible to get some work done! 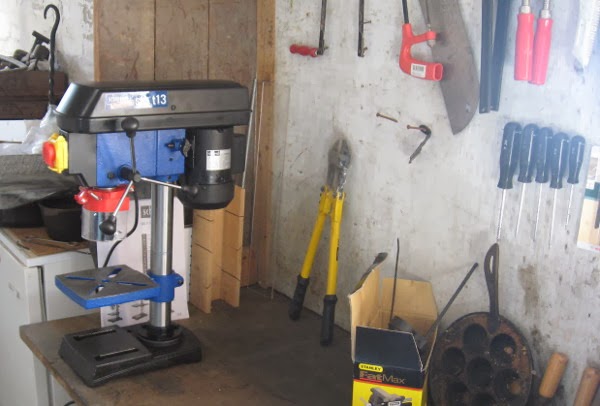 Email ThisBlogThis!Share to TwitterShare to FacebookShare to Pinterest
Labels: DIY, House, Other Areas of Interest, Workshop

2/3 of the day I was busy cleaning/desinfecting bottles, and filling and corking them. 30 bottles of fluid gold + some ½ bottle or so from which I filtered the precipitate. 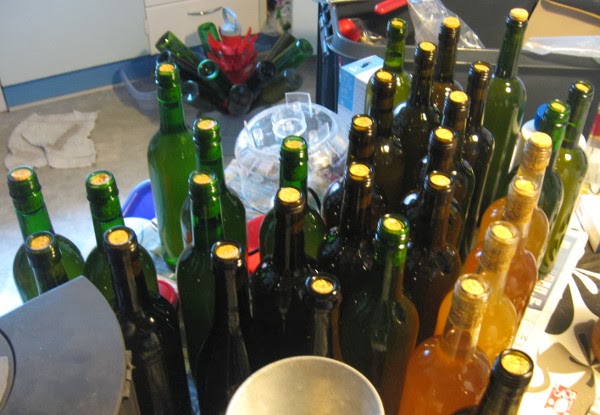