As my game of Through the Badlands with Emil resulted in two characters being captured by the Orcs, I had to piece together a scenario for searching and rescuing the unfortunate adventurers.

I have based the following scenario somewhat on the rescue.pdf file by John Acar, found on the Song of Blades and Heroes Facebook page, but it is not the same scenario, as I have added a lot of stuff.

I hope that it will prove useful for other SS&SS players, and I may upload it to the SoBaH FB page when I have made the final adjustments based on yesterday's game.

One or more Characters are held captive by the Foes from the scenario in which they were left behind.

The terrain and Foes should be similar to the terrain in which the PCs were left behind.

Basic Scenario
Setup
In the middle of the board place a camp or village made of 3+ structures (tents, cabins, huts, ruins, whatever, or a combination).

Deployment
For each player ther will be one horde of d6 minions patrolling the area. Place those randomly.
The players then choose which corner(s) they start in (the PCs have scouted the area in advance). Place the Party or Parties within 2” from the chosen corner(s).

Foes
Foes should be of the main type(s)/race(s) encountered in the scenario during which the characters were captured,
The patrols are 'Not Alerted' and move randomly before each Player activates his first Character, and whenever an Event Card activates them.
If at any point a Character is within 4” (Detected if Hidden), or when the Monster Frenzy Event Card is drawn, all Foes are immediately 'Alerted'.
When Alerted, d3 Minions appear from each structure not yet searched, and make a move towards the closest visible PC.
Alerted Foes act as per the normal game rules.

Searching
When a PC is inside (or if not possible to enter, in base contact with) a structure, it can be searched in 1 Action.
Roll a d6:
1st Structure searched: A random prisoner is found on 4+
2nd Structure searched: A random prisoner is found on 3+
3rd and subsequent Structures searched: A random prisoner is found on 2+
Note:
If the PCs do not find all the characters they are looking for, they must capture and interrogate
a Foe about the missing Characters' whereabouts
To capture a Foe in base contact with a PC, declare that the active PC is going to attempt to do so, then roll against Foe's DL. If the roll beats the Foe's DL by 3 or more, the Foe is captured. If you beat the DL by 0-2, nothing happens (the PC deals no Damage). If the PC loses the roll, he takes damage as usual. Add 1 to the roll for each Friend also in base contact, and vice versa.
For interrogation, spend 3 actions, use appropriate Traits (Charisma for persuasion (can only be attempted once per PC per Foe), Strong for torturing, etc. Each attempt at torture removes 1 HP from Foe whether it is successful or not.

Prisoner Health:
When a prisoner is found, roll on the Out of Action Table (+1 for each Level of Healer of the searcher)

Already while Ulolkish was on his first turn (he won the Initiative Roll), the Orcs were Alerted.

Seven Orcs emerged from the village, and promptly charged in the direction of the approaching party which had already been spread a bit thin. 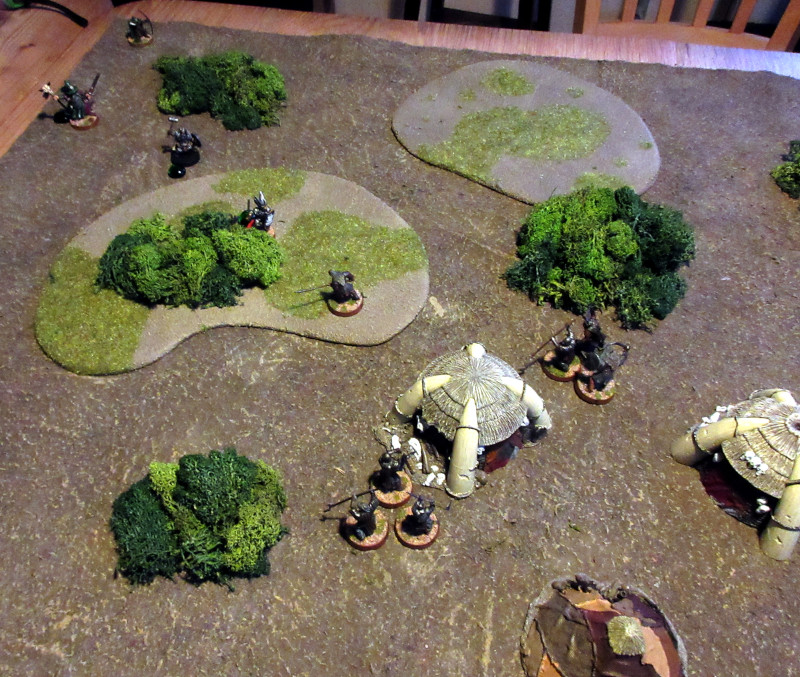 Even though the Orcs had been drawn away from the village, my party advanced cautiously- 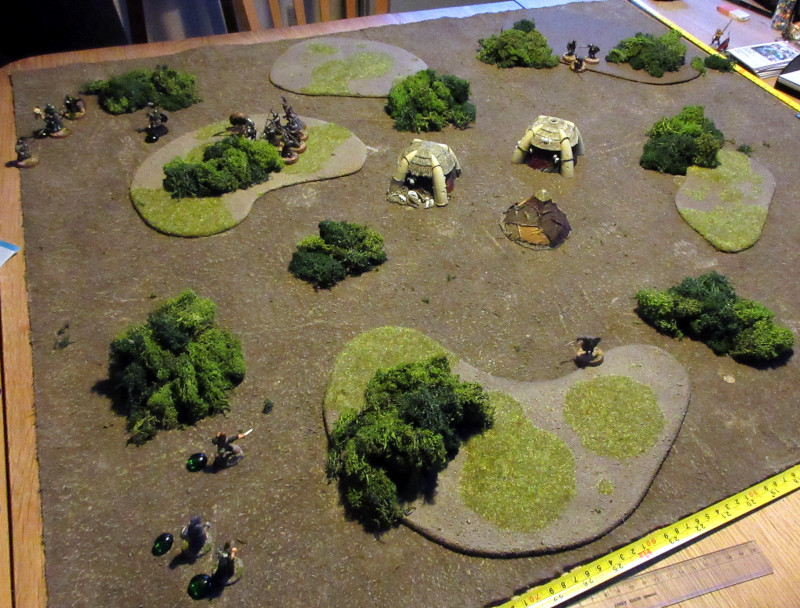 Saimon the Sorceror blasted the Orcs, while Argesïl and Rhagador went for the village. 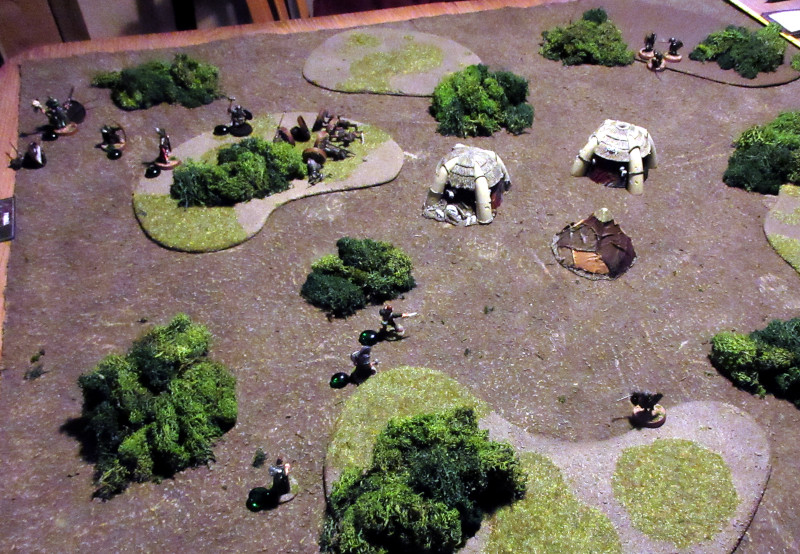 While the other party was doint the fighting, Rhagador and Argesïl found Finghal and Leonides. Both were only able to move 1", so it was decided to carry them off the board. 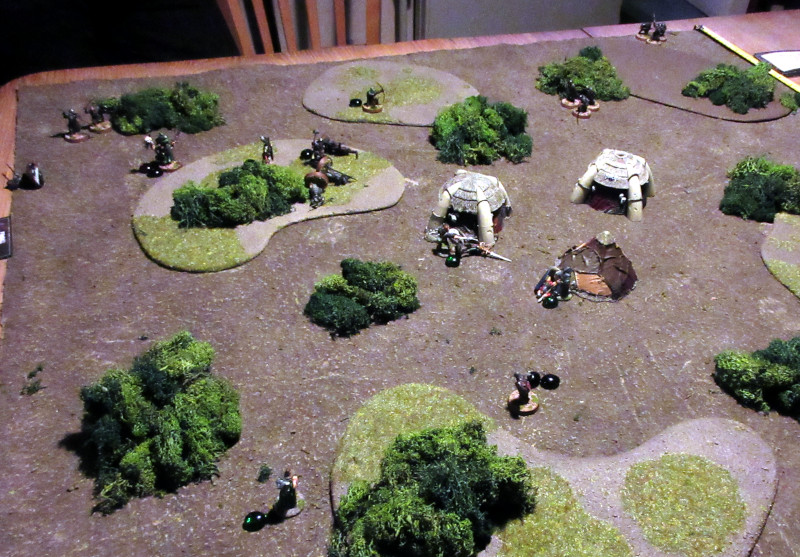 Ulolkish's party also arrived at the village, while Shaggram seemed to have lost his way... 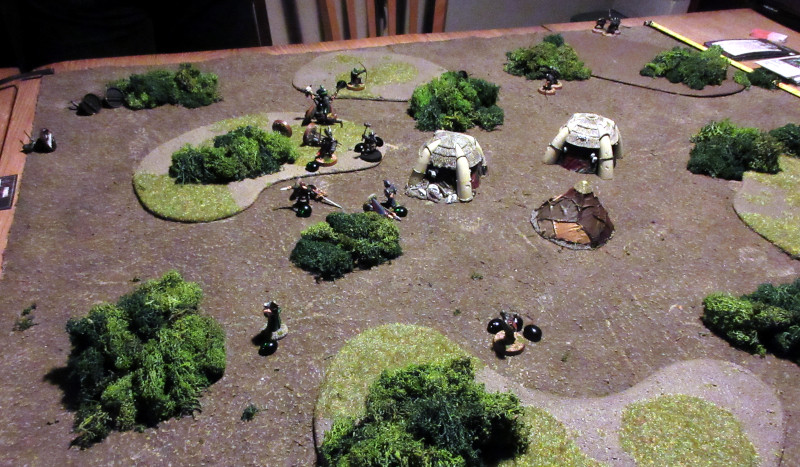 I shall post the second half of this AAR one of the next days - I am a bit busy this week, as I have to prepare our living room for entertaining friends at a julefrokost (a traditional meal with open blackbread sandwiches and lots of beer and akvavit, celebrating Christmas, and probably a reminiscence of the winter solstice blót), so all my hobby projects and gaming stuff have to be put away.
Posted by Argonor at 22:10