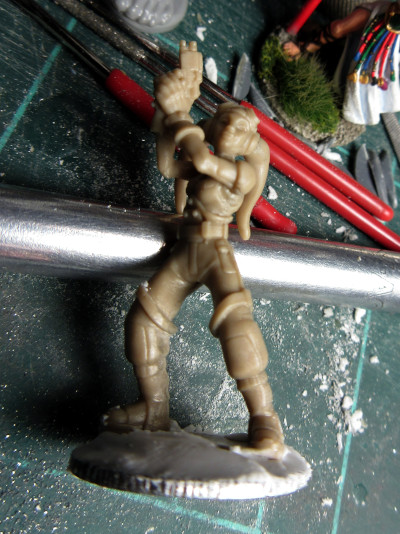 I also got Hera cleaned up and rebased today, and I have now put some filler on her and Brian Blake's bases.

I absolutely loathe the plastic those Imperial Assault miniatures are made from, but a good side cutter and a sharp X-acto blade go a long way when working them.

I expect to prime Hera at the same time as Brian, so she will be ready for painting when I have finished Brain and the Barbarian for Lea's Sellswords & Spellslingers party (Galactic Heroes has been released, now, and as soon as I have Hera and Chopper painted, I am going to purchase both that ruleset and FfoL Horse and Musket, which I want for very small scale Napoleonic conflict (smaller than Song of Drums and Shakos)).

I may not get to work a lot on myhobby stuff tomorrow, as I have to do some more work in the vegetable garden before noon (while the sun still shines), and I have promised the kids to play some games after lunch, but I still expect to get basing finished on both Hera and Brian Blake, so that they can be primed Sunday evening.