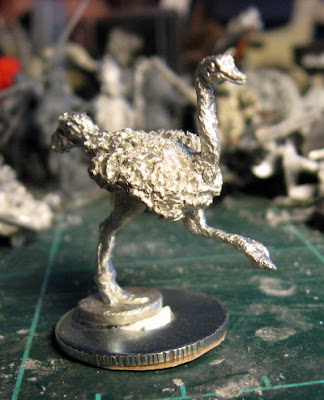 This Honoured Lead Boiler Suit Company mini has been lying around on my prepping station ever since I painted another ostrich from the same pack for a painting club at the LAF.

As part of my plan to get some stuff cleared from the prepping station, I cleaned it up and glued it to a washer.

I intend to get Ganesha Games' Paleo Diet game, and a flock of ostriches would be a viable game objective for a group of Paleolithic hunters.

HLBSC has stopped trading in 28mm minis, but most of their ranges were picked up by Nick Eyre at North Star Military Figures, and it should be possible to get another couple of packs (and some antelopes, or other game).