It's been quite a while since I purchased and printed this little beauty; I actually brought them with me to Horisont III two years ago, but somehow it managed to slip under the radar until now.

Shortly before my Chrismas vacation ended, Ulrik (duregar) came down from Odense to play a couple of games, and after we played a 4-way game of Star Trek: Attack Wing with my daughters, he and I brought out my Whitewash City Buildings and had a quick and dirty showdown with only 3 vs 2 figures (my entire painted Collection of Old West minis).

I only took one pic, as the action was intense and over much more quickly than I expected (partly due to some extreme dice-rolls, partly to underestimating the power of the Colt .45). 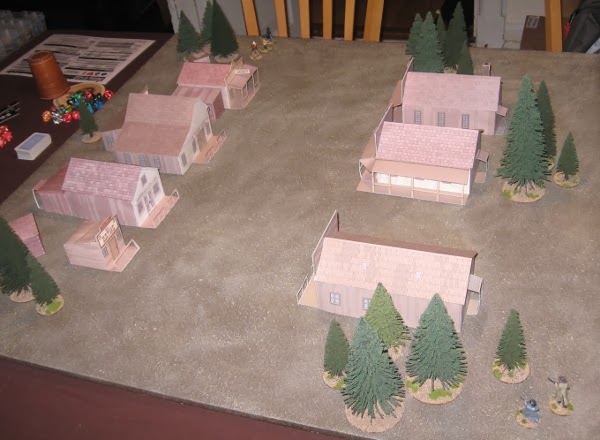 The buildings had soaked up a little moisture from the air, and I couldn't correct the sidewalk railings before they dried up, and I think I may have to glue matchsticks to their backside for stability - but thats a project for the future!

I should have put all the rifles in the same Group; having both long range and short range armed characters gave the 3-man Group too many strings to play, as their lone rifle could provide suppressive fire while the other 2 closed in.

Had one Group had short range weapons only, they would have had to duck and weave to close in on the rifle-Guys, while the latter could try to circle their opponents to keep them at bay.

Lesson learned the hard way, as my 2 outlaws could not exploit their rifles to the limit; ome got gunned Down by the opposing rifleman almost immediately, leaving the other one hopelessly outgunned.

I think we played 3 turns in total, but it was enough to show that the game needs more items to break up LoS and provide cover, such as civilians and 'street furniture' (wagons, barrels, crates, etc.).

More Buildings, forming several roads/alleys to move along, would also be nice, as would bigger posses, but, Again, it's a matter to deal with later...

The game flows fast, and the Card activation engine seems to work a blast. The game was too short, but mainly because of the limited number of combattants, and a couple of odd dice rolls by Ulrik.

I'll be playing it again, for sure, each time I have painted or built something new to put on the table.