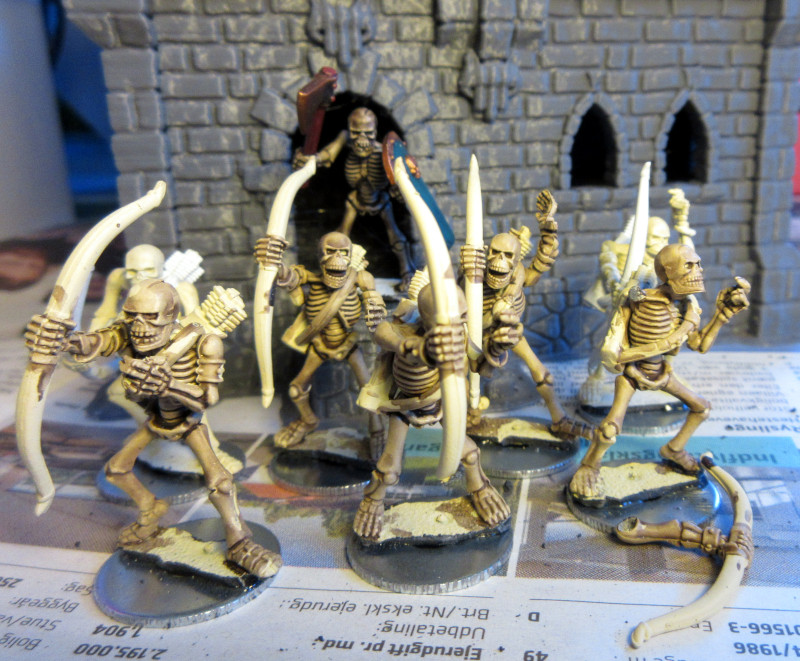 The only work I have done on these until now is the rebasing. Part of a large Khemri job lot I purchased a couple of years back, they have been sitting idly in my Necropolis (large cardboard crate with unused Undead plastic), but with SAGA Age of Magic now almost ready to be played, and with My God of Battles Lords of Undeath in need of some ranged support, and the fantasy version of Mortal Gods 'Mythic' probably coming out later this year, now it is time to do something about it.

In addition to the above mentioned games, I have recently downloaded One Page Rules' Age of Fantasy Skirmish, and I  also have a hunch that I may have to get Warlords of Erehwon. 😏

One of the skellies lost an arm in the process, I shall have to poly cement it back on tomorrow, and I also got a wee tad overzealous with the Dremel, and cut of 1/4 of a bow on the last of these first eight archers; I think I shall just cut off the hand, and glue the hand form a spare archer arm on instead.

The observant reader will have noticed something new behind the Skeletons - it is also a work in progress, and I should have something to show tomorrow!