Some days ago, I was approached by Kevin, who had taken an interest to SAGA, and wanted to know if I could host a demo game next time we meet up. I dug out my Rohan models to construct an Anglo-Saxon warband, but fell short a few models. 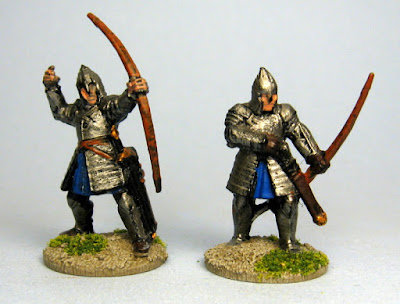 I am substituting in  some Minas Tirith spearmen for Hearthguards, until I can get some Royal Guards painted up, and the Levy also needed some filling in, so I rebased these two second-hand models for the time being (they will be stripped and re-painted in due course, but not ntil they have formed the basis for a new unit of archers for my Gondor God of Battles Mercenaries proxy army).

Tomorrow I shall start looking for Rohan Royal Guards, as I think the SAGA project will have to take precedence right now (although I did prime the newly assembled Vikings earlier today).
Posted by Argonor at 21:19