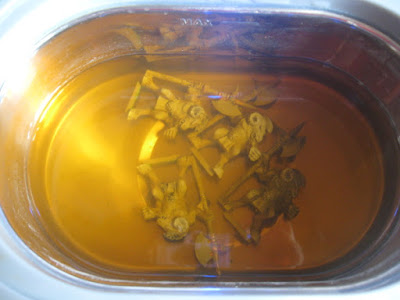 Well, it had to happen. A new set of rules = a new project.

I am going to include a unit of Satyrs, and as I bought some second-hand Citadel plastic Chaos Beastmen along with some plastic Bretonnians last year, I thought I would use some of those for this purpose.

Some of the Beastmen are covered in really bad paintjobs, and I thought this would be a good time to bring my ultra-sonic cleaner into service once more.

To the right, four Beastmen is getting their second treatment after getting a good scrub with a soft acrylic 'leather brush'. 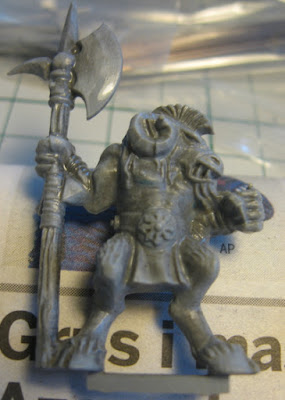 This fellow to the right was ready after treatment with a brass 'leather brush'.

I need only four for this my first warband, the rest of the Mortals being formed of a unit of legionaires (Greek Hoplites) and one of Veteran Legionaires (Spartan Hoplites)- which I have to assemble and paint, too, as I do not have many ready for painting.

My two Legends will be a Centurion (Generic Greek Hero), and a Harpy - which I have to purchase, prep, and paint, and I think another Foundry order is building up.

I had hoped that I would not need further purchases this side of the summer holidays, but I really want some armies ready for OGAM as soon as possible.

It seems a fast and easy to pick up game (it is basically Song of Blades and Heroes, just with units for the rank-and-file troops instead of individual models), and, although I am not fan of pass-activation-roll-or-forfeit-your-turn games, the Ganesha engine is so straight forward, that a game does not require a lot of planning and rules-reading - just build your warband/army (yes, I think it scales very easily), and get stuck in - you can always avenge a defeat the next time (the Dice willing). 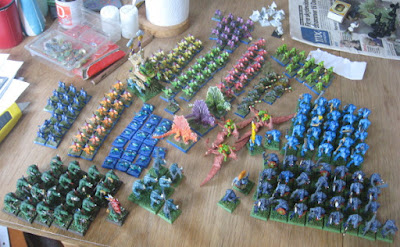 I also plan to make a 'Slann' warband from some of the painted Lizardmen army I purchased recently - I shall use the Slann as the deity, and some of the larger models (the Salamanders and the Terradons) as Legends (and I shall see if I can find some Kroxigors to fill this rôle, too).

I may have the Lizardman warband ready very soon, but the Romans will not be painted, until I have my Blood Eagle project ready for Åcon.

Shortly after I wrote the above, my ultrasonic cleaner blew a fuse, and now has to be de-commissioned. IF I can find the invoice for it, I may be able to get a re-fund, as I purchased it less than 2 years ago, but that is a very big 'if'.
Posted by Argonor at 20:16