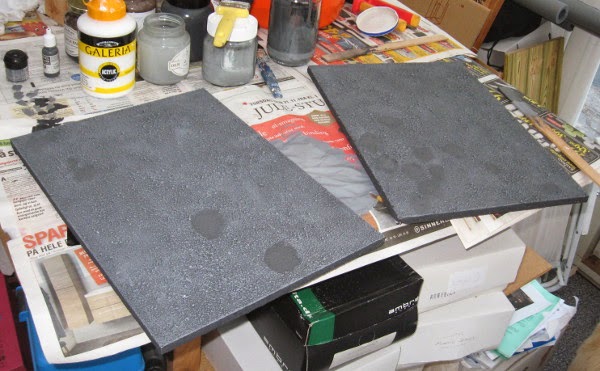 The dark spots are areas where I got overly zealous, and a few where some white paint plattered tiny dots on the surface when I stupidly opened a W&N bottle that had been sitting in over 30 degrees Celsius in the conservatory all day without any precautions.

A quick repaint with the 'German Grey' mix, and I'll go over it with the 'Codex Grey' mix tomorrow.

I also dug out my Moria Goblins, and the painted Cave Troll from the MoM set. Sorry for the crappy photo, it was taken with flash, without tripod, in an almost dark conservatory: 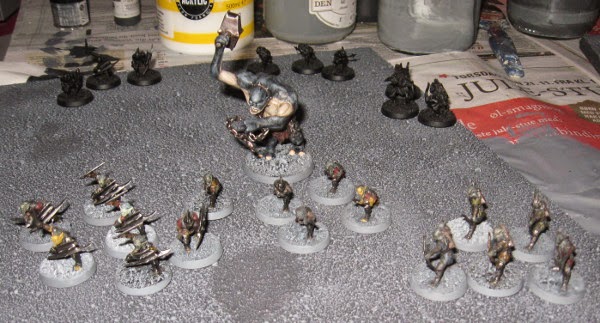 Some of the bases are a bit too bright, and I'll probably go over them with the proper colour combo.

As soon as I have the reinforcements from Gibby at the LAF, I'll have plenty painted of each type gobbo.
Posted by Argonor at 21:33 No comments: 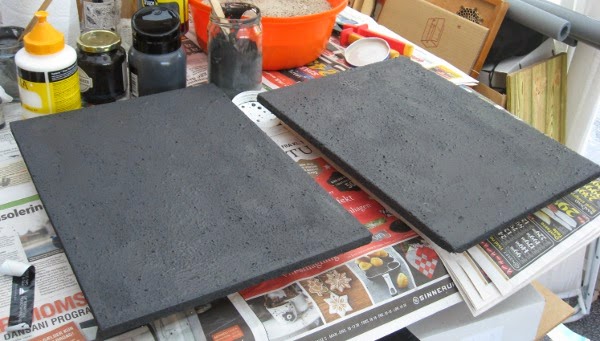 After painting, I mixed some paint to resemble Old Citadel Codex Grey - which I'll use for picking out the texture with a drybrush.
Posted by Argonor at 19:08 No comments:

Yesterday, I glued sand onto the two small boards I'm making for MoM: I covered the boards in unthinned white glue, and piled a think layer of sand on top. The whole shenanigan is situated in our 'conservatory' which becomes very hot when the sun is shining like it is presently. 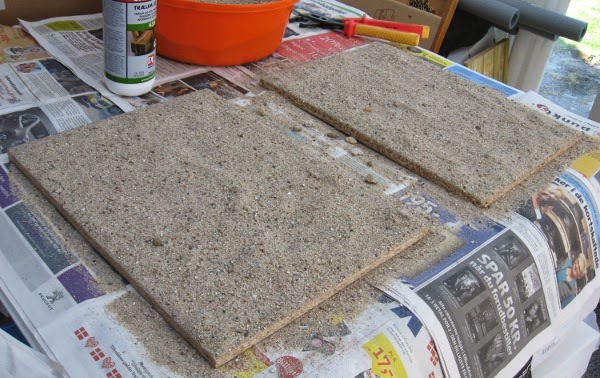 Today, I removed the loose sand, and then covered the boards with thinned down white glue (milk-like cosistency), with a little wash-up liquid added.

The thinned glue seals the sand, and makes the surface very hard an durable.

Here are the boards, covered in wet glue: 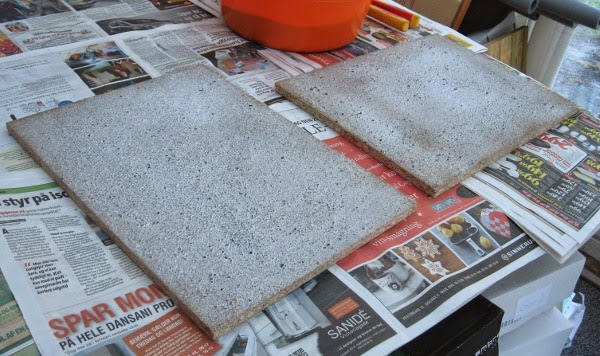 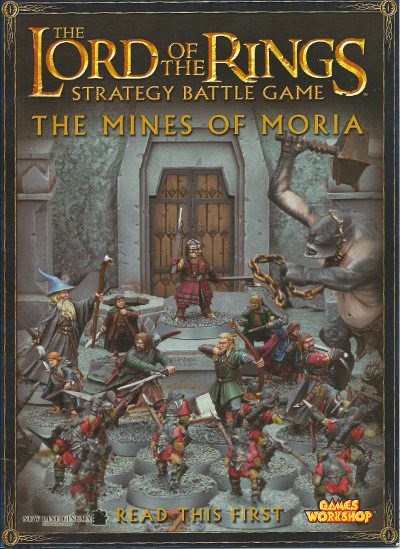 Well, as stated in my previous post, I have decided to revisit LotR:SBG, for which I have numerous painted Battle Companies.

This time around, I'll focus on the Fellowship, and get minis ready for one scenario at a time.

I'll start with the simple ones from the boxed set The Mines of Moria, and as I have already several years ago painted the Cave Troll, and more than a dozen Moria Goblins, I shall have to start by cleaning and assembling the plastic Fellowship models from the box.

Earlier today I started making the 2 small boards required for the scenarios in the book to the left, cutting out chipboard in the required size, and I plan to glue sand onto them tomorrow morning (after serving pancakes for breakfast to get in the right Hobbit-mood).

The plastic terrain pieces from the box I also assembled and primed several years ago, so they just have to be painted - which in this case means successive drybrushes with a large brush.

It's a shame that the first scenario requires the full Fellowship - would have been nice to be able to paint a few minis, then game, then paint another few, but that's not the way it should be...
Posted by Argonor at 00:47 2 comments:

About 1½ week ago I stumbled on my ages-old boxed set of Flintloque, and I decided that it's about time I get some of that lead painted for a few games. 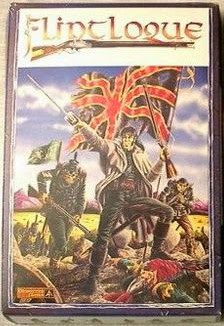 I am currently working the following sequence in a loop on my prepping desk: Flintlogue-mini, Plastic man-at-arms (AHQ), Mantic zombe.

We have very nice weather around here at the moment, so the garden is taking a lot of my time, and I have not been able to get the modern zombie batch on my pain(t) station ready, yet, but I really hope to get them done soonish.

I am yet to receive the stuff from 3 orders I made a couple of weeks ago(!), stuff for Chivalry, and War Rocket, and I find it hard to keep the steam up when I have to wait for so long for something.

Thus, after seeing some pics of a really nice Lord of the Rings: Strategy Battle Game scenario, I dug out my Mines of Moria set, and decided to start getting boards and minis ready for the scenarios therein.

I already have the terrain pieces assembled and primed, and a Cave Troll, and more than a dozen Moria Goblins painted up, so it's just a question of painting the plastic Fellowship from the box, painting the terrain, and making 2 small boards (30cm x 40cm), that I cut up this evening.

Tomorrow I'll glue sand onto the boards, and maybe seal them, too, and as soon as I have assembled Mantic zombie #30, Fellowship minis will take their place in the loop.

The only thing to slow me down will be the garden, and, if my War Rocket and Crossed Lances stuff arrives.
Posted by Argonor at 00:13 No comments:

I just received these in the mail today, courtesey of 'El Prez' on the LAF.

Supposedly undead dwarfs (and a very dead dog) and I think I'll need to sculpt some entrails on one of them... 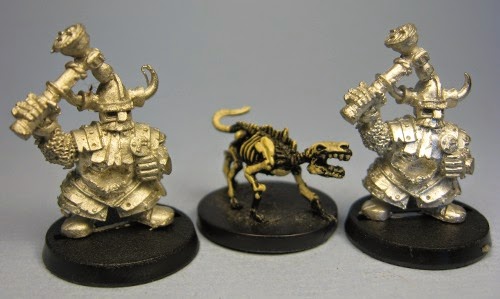 They are headed for my PSZ: Warhammer Apocalypse Z - project, for which I'm almost done assembling the first 30 Mantic zombies.
Posted by Argonor at 20:40 No comments:

I've been primarily adding to the links pages the last few days.

I've also started another project/process, of which I shall talk later.

End of week, a small batch of minis should be finished. Hopefully. If the Stars are Right...
Posted by Argonor at 23:41 No comments:

I finished painting the first foot-and-mounted set of my semi-commission a couple of days ago.

I shall not be showing pics of them, until the 'customer' makes use of them, though - just a quick heads-up, here.

Shortly, I'll have finished a little batch of something else to show, so stay tuned!

This is what I think I'll be able to do this year (I have plenty of other projects to see to, you see):

If I complete the list faster than expected, I'll add to it, but let's see about that...
Posted by Argonor at 22:05 No comments:

I have ordered Crossed Lances from Sally 4th, ans some plastics from Fireforge Games (Templars Cavalry and Infantry, and Foot Sergeants), to make some early feudal knights for the game.

Crossed Lances is rules for knightly tournaments, with jousting, melee, and archery (for the squires)

Each character needs to be done in 3 versions:


To make the knights useable for skirmish and/or battle games, too, I'll use the same gear and hand weapon for the mounted and dismounted versions.

I am presently looking for a solid ruleset to use for the games outside the tournament field, but I have some requirements that have to be met:
Until further notice, I'll just use Song of Blades and Heroes, as it meets most of the above criteria, but I would like to find something made for historical gaming, instead of fantasy,

My main protagonist will start out as a newly knighted youngster who's been given a small hamlet to attend to by his feudal lord.

I am going to use this as an outline to build a small 'castle' consisting of just a stone house, and a courtyard surrounded by a wooden palisade. I'll then over time add a small hamlet, some fields, and the peasant familes to go with it. Over time, the hamlet should grow into a village, with a road inn, a mill, more houses, etc., etc.

The terrain will be used for games set around the knight, and, of course, for other settings, too.

I am going to build up an entourage of retainers over time, but I feel that the number of men-at-arms available to our knight should depend on the size and quality of his possessions.

Thus, depending on the ruleset chosen, I'll apply an upkeep allowance for each peasant hut/family, field, and other assets maintained by our hero.

Right now I'm fostering the idea to use some of the old sets of Mighty Empires I own to create a map of the area, but that is a future project.

As soon as I receive the Crossed Lances rules, I'll have to construct some jousting tills, some archery targets, and some enclosures for the close combat competitions, and parallel to that I'll get some knights assembled and painted.

This, of course, does not mean that I'm ditching my other ongoing projects, I'll just add this to the work I can switch between to avoid boredom.

And, really, having been ever a medieval afficionado, I think it was about time I started some 'real' medieval gaming...

Well. Not because I'm not actually doing anything (I have almost finished the first 2 models of my semi-comission), and I ordered War Rocket (Hydra Miniatures) through Wargames Emporium just the other day - along with 3 Class I Galacteer ships, and 3 Class I Zenithian ships, which I intend to use as Robot Legion vessels.

I have been wanting to do some Retro Sci-Fi for a long time, and a very nice entry of Valkeeri in the Lead Painters' League at the LAF finally spurred me into getting the rules and a few ships to get started. I intend to paint Buster Gordy and some Galacteers, plus their Robot Legion adversaries, so I can link up between space combat and planetside action, using Fantastic Worlds for the latter. That's the plan, anyway - let's see how well I execute it...

Real life does not permit me any gaming time at the moment, but I hope to get a few games going, either during Easter, or week 19 (vacation), or even both; it all depends on the availabiluity of my gaming buddy.
Posted by Argonor at 14:04 No comments: 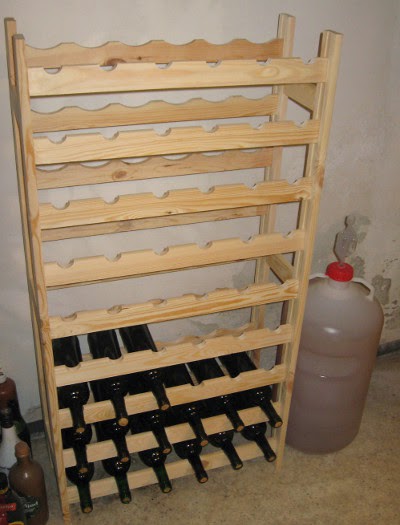 Finally got my wine rack for storing mead bottles assembled. Had to pre-measure and drill some holes in the racks, as there was nothing to show, where to put the screws.

But now I have storage space for the next couple of batches.

As you can see, my second batch is happily bubbling away to the right, and I have started up the yeast culture for the third, for which I'll boil the first half tomorrow.

Soon I'll order another couple of fermentation containers, and then start up the next brew.

I should be able to keep up a steady supply for school reunions, Attic Attack, and overall consumption, when I have 5 or 6 containers, starting up a new brew every 2-3 months. The biggest problem will be to procure enough used bottles, but if everything else fails, I can always buy some.

There's a hostel in Ringe, just a 5 min. drive from Kværndrup

I'll add the  info to the Attic Attack page.
Posted by Argonor at 21:06 No comments:

The following link was kindly offered by Mike from Black Hat Miniatures as a mainland Europe distributor of Coat d'Arms:

Royal Mail does not accept packages with more than 4(!) pots of water-based paints these days, so for those of us who need solid supplies, ordering them from the UK is a bit impractical (and expensive if we use courier).

I'll add the link to the Materials page.
Posted by Argonor at 22:07 No comments: