In the Emperor's Name: Testing

Upcoming Wednesday, my Dark Angels will be duking it out with some deviant Space Wolves at my club in Svendborg. I have managed to make a 199 pts retinue for a test run of the game, so if real life does not jinx my plans, I should get to roll some dice.

The rules is a free stand-alone skirmish system based in the 40K universe, but not to any extent on the rules from GW. No rules for heavy vehicles and/or weaponry, the ruleset is aimed at small commando-raid/black-op style fights, and a standard retinue typically fields only a handful of miniatures. There is, however, rules for experience, and/or suggestions for fielding larger forces.

I am planning to do an Eldar Craftworld Retinue, and a Genestealer Cult in addition to my Firstborn, but I guess, some time will pass before I can field any of those, as a huge zombie horde is heading in my direction as we speak, and it will keep me busy for at least the rest of this autumn.
Posted by Argonor at 15:03 No comments:

I have been working on getting a large bunch of W40K 2nd Ed. plastic Orks ready for a quick-and-dirty paintjob to try out Warpath from Mantic Games. 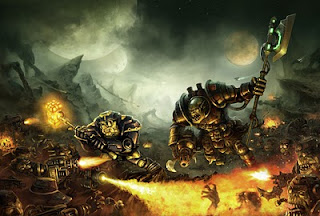 Warpath is perhaps not the greatest ruleset out there, but it looks like it can be played very fast, which is a BIG plus in my book - all too often I have given up following a club game of W40K, because virtually no progress happened over a very long time, (most often because the players argued over some obscure special rule), and it is also a very simple set of rules, another BIG advantage over the insanely complicated/detailed rules from GW.

I used to like detailed rules, but as I'm maturing as a gamer, I tend to prefer fast-paced, simple games, where the process is not an obstacle for reaching the results, even ones with only a handful of miniatures on each side, but I have my mind set on trying out Warpath, as it seems I can easily play the game against owners of  W40K armies, because some of the races are equivalents of W40K-races, or can be proxied using 40K-minis.

Recently I purchased another fairly large lot of the same kind of Orks and Gretchin (yes, I'm FAR behind updating my painting tally!), and those will be added to the Marauders force, I'm slowly working towards fielding...
Posted by Argonor at 10:35 No comments:

The parcel with my order disappeared in the mail, but Fenris Games immediately send me a replacement when I asked about the status of the order. I now have the (unopened) parcel with a lot of custom-made bases at home.

I am going away this weekend (Friday to Sunday noon), but as soon as I'm back I'll start glueing Polybian Romans onto bases. Posts and pics will follow - but not until Sunday at the earliest.
Posted by Argonor at 10:10 No comments:

Email ThisBlogThis!Share to TwitterShare to FacebookShare to Pinterest
Labels: Ancients

Back on the horse!

Been a while since my last update. Last couple of weekends I was away doing 'extras'-duty for my club at something called 'Bardatræf' (Barda-Gathering) in Svendborg and Haderslev - a LARP-event for kids arranged by Danish television (DR) and the people arranging the Roskilde Festival. More about this will appear somewhere on this blog.

At the same time I have had ABSOLUTELY no energy for anything but collapsing on the couch with a book or the TV on the last couple of weeks; I'm suffering from a light medical winter depression, probably induced by the absolutely AWFUL summer here in Denmark this year (normally, I don't feel this down until the start of January or even later, but we haven't had nearly the amount as normal of sun-hours this year, and it has been 31 years since we had this much rain).

But I have now finally received my bases for my Basic Impetus project (the first parcel from Fenris apparently  was lost in the mail, but the nice guys immediately send my order anew, and it arrived at my post office 2 days ago), and I have a horde of plastic zombies shambling my way, so I better get my act together and dig in again...
Posted by Argonor at 10:05 No comments: 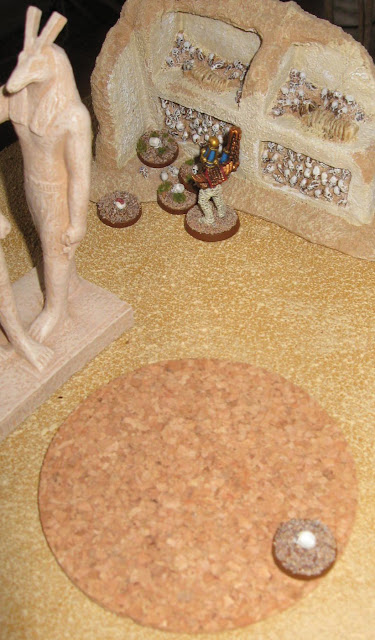 Meanwhile, the evil sorcerer went about his grizzly business. One skull had been successfully prepped and placed, and the second was almost ready. Set smiled.

The picture below shows an owerview of the eastern part of the necropolis at this point.

Also note the group of Skeletons passing the small dune. Big mistake - don't try this at home! 1/1 minions should NOT - I repeat: NOT cross difficult terrain. Ever. Period. 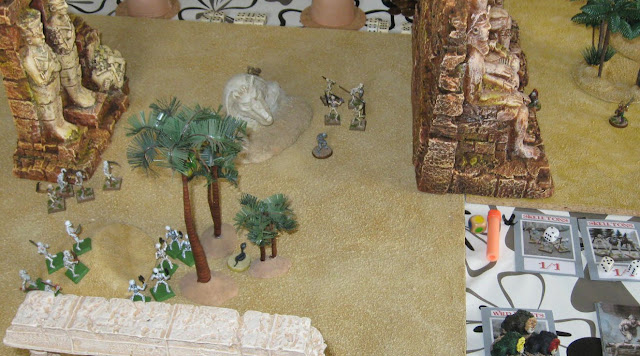 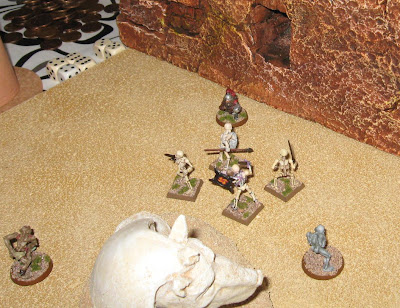 Thrombur assessed the situation, and decided it was time to break some bones, before the entire Deadite swarm would arrive at the entrance.

With a fierce warcry he stepped out into emty air and landed securely in the sand below the doorway.

The wounded Elf, dragging his leg through the sand, advanced with more caution - prudently, some would say.

Never the less, seeing his companion disappear through the Door of the Kings made him fasten his resolve and speed up a bit. 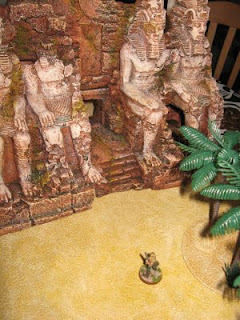 Thrombur tried to lure the skeltal guards away from the rather high step of the door, but as the dim-witted boneheads did not seem to get the idea, and the Flesheaters were getting too close for comfort, the hot-headed Dwarf again charged in, dispatched a Skeleton, and quickly withdraw.

Chwllurhwch, watching from the safety of the Door of the Kings, considered joining the fray, but restrained himself a bit more.

The once proud Captain of the Guard, enraged by the demise of his trooper, attacked Thrombur.

Which proved to be a mistake!

Chwllurhwch, seing the ease with which Thrombur seemed to handle the grim guardians of the necropolis, decided that now was the right time to descend. 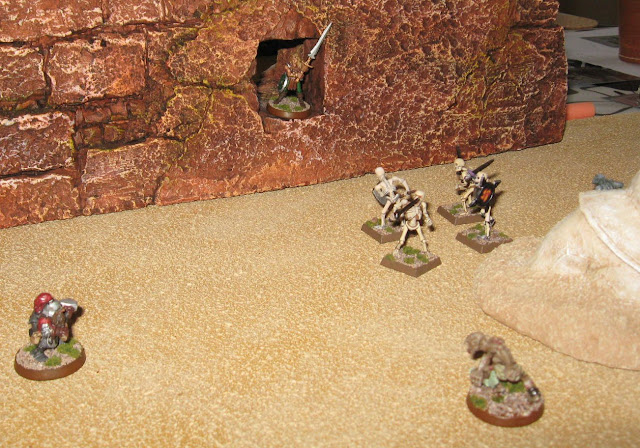 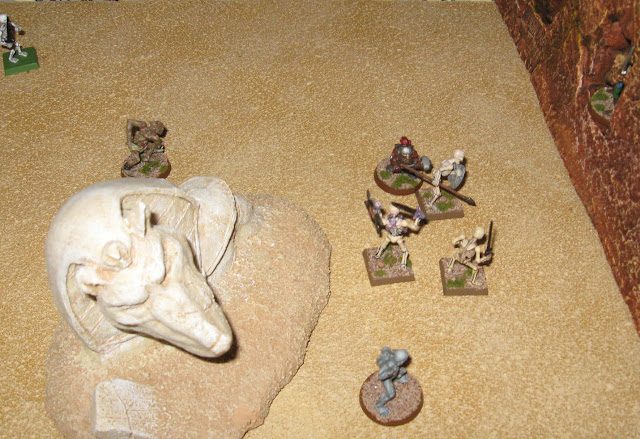 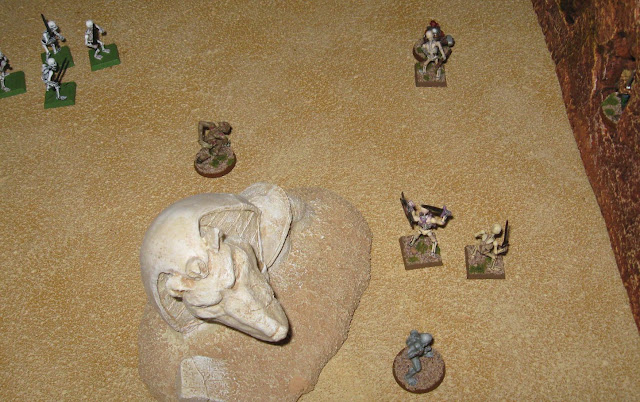 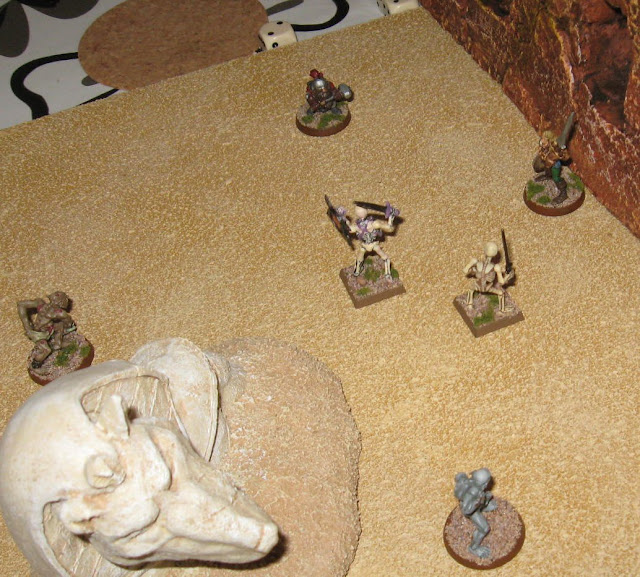 With almost feline grace, the Elf jumped from the doorway, landed on his already wounded leg, - and hurt himself even more.... 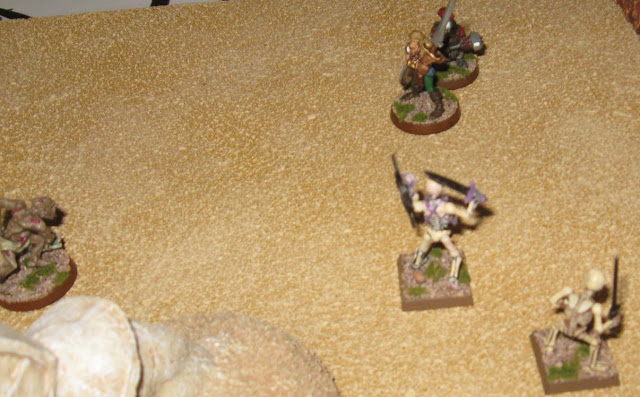 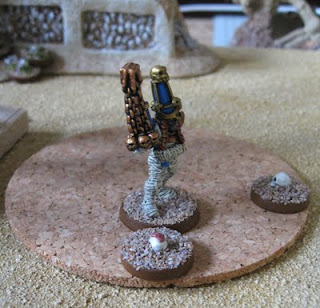 Chwllurhwch then managed to get up, and drag himself to the relative safty near his trusted friend.

At the same time, the Mummy King set the second skull of the summoning circle. Dark clounds began to gather over the valley.

Then, Chwllurhwch was beset by a Flesheater, and managed to wound the hideous creature.

Meanwhile, the rattling hordes approached steadily, and the second Flesheater charged into the melee.

Things were beginning to look quite bleak for our intrepid adventurers. 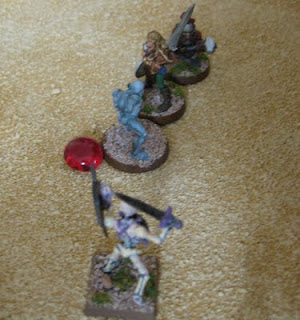 Would they manage to survive the onslaught of the corpse-eating monstrosities?

Could they fight their way through the heaps of bone?

Would they be able to reach the mastaba in time to prevent the summoning of the Spirit of the Dead?

Would Chwllurhwch kill himself before the enemies got the chance?

All this, and more, will be revealed in Part Four.

In the meantime, thanks for looking and your patience - I do not have as much free time as I would like to, so updates may come sparsely and sporadic. 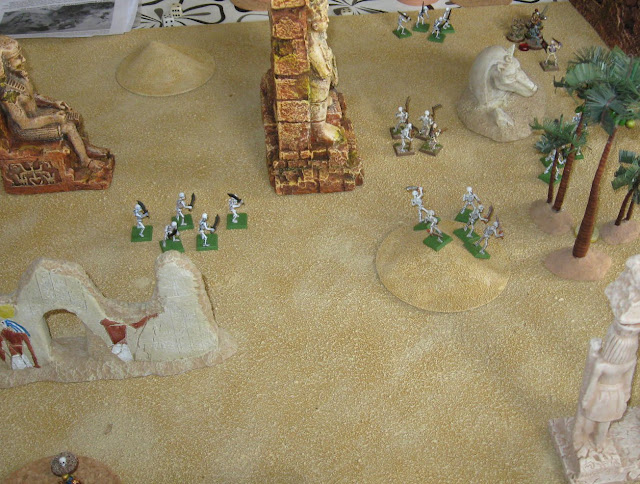 Just this before parting:
It's been fun so far, both the game and the write-up, and I'll try to get to the conclusion next time.
Posted by Argonor at 17:26 No comments: