Some Old West Minis Getting Ready for Painting.

My High Moon project is making only very slow progress. This is due to a lot of things, most notably real life getting in the way all the time. With the 'tatoes well under roof, though, I should be able to squeeze in more hobby time over the next month or so, until after Christmas, when I have to fell some trees/bushes, and cut back a lot of branches, in the back garden.

But, for now, I have gotten the minis for out lead character ready for priming. Duregar/Ulolkish, who is going to play him, will be painting it, so, hopefully, we should be able to play the first scenario somewhen in January (I also have to paint some models, but when I get started, they should not take me too long).

Here's our (anti)hero, both mounted and dismounted. The minis are from Foundry and Knuckleduster. 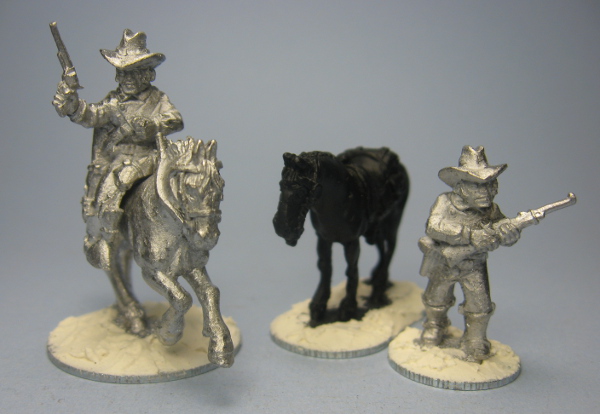 Well, time seems to fly away on the wings of ornithopters these days.

I have been busy getting the last potatoes out of the soil, as winter has finally arrived with forecasts of -10 C this night, so I thought I had better.

I have not been completely idle on the hobby front, though, and I have assembled my first five British infantrymen for my Africa/Zulu War project. 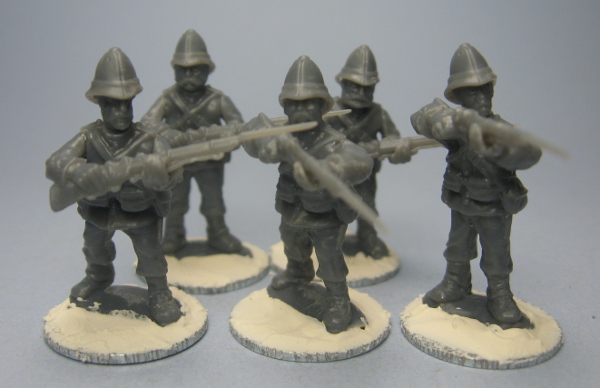 Unfortunately, each sprue comes with only three sets of arms for each stance, so I have to use two sets of shooting stance arms out of every five models (with twenty in the set).

There is a right arm with an empty hand that may be usable with the extra Martini-Henry provided, so I think I shall try out that option from the next sprue.

I still think these will be OK as assegai-fodder at an arms length when I have given them a table-top quality paintjob, but I certainly shall not be adding more of them to my collection (unless someone actually throws them at me just for taking them).

I shall add some 'rough' to the bases with some filler, and then they are ready for priming!
Posted by Argonor at 20:50 No comments:

Weird 'Sight' on a Long Colt?

I have been cleaning up a Foundry mounted U.S. Cavalryman for my Old West project, but I stalled when I reached his Colt. 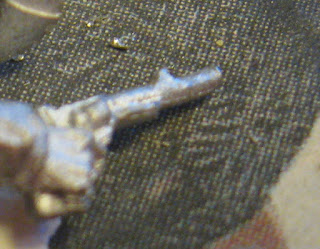 It looks like there is a sight 2/3 down the barrel, instead of near the muzzle, and this baffles me a bit.

I wonder if any cavalry revolver actually looked like this, or if it is just the result of a casting vent on an old mold?

I would be much obliged if any of my readers can shed some light on this for me, as I haven't been able to find anything on the matter...

In Denmark, it is tradition to celebrate 'Mortensaften' (Eve of Saint Martin of Tours) on November 10th (we always celebrate on the evening before the actual day here, like Christmas Eve, Saint John's Eve (Midsummer), New Year's Eve, etc.) with a feast of bird. 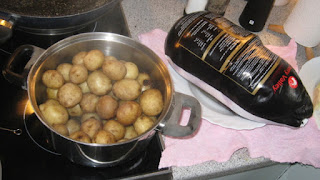 Originally, the bird was a goose, as Martin of Tours is said to have hid in a goose pen to avoid being appointed Bishop of Tours, but the geese, startled by the monk coming into the pen, cackled and thus gave him away.

With households having shrunk to a mere 2-5 persons, though, most people these days feast on a roast duck instead, as it is a more manageable meal. 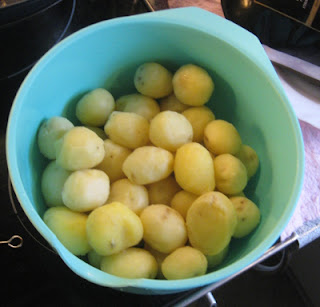 Here in Denmark, much winter's food (like pork roast, roast poultry, 'medister' sausage, etc.) is served with 'browned potatoes' which is small cooked and peeled potatoes covered in caramelized sugar on a hot pan, so, naturally, I have prepared some 'tatoes for todays supper, too.

Now I shall go for an eight kilometer walk with the dog to get my appetite up for tonight, before I put prepare the duck for the oven.

Then it is time for doing some tidying up in the house (we had a delayed Halloween party in the attic Saturday, and I had to remove some of my boxes from up there to make space for the kids - so now I have to make space for the boxes in the conservatory, which means sorting out the contents of some of the boxes already there, and see what I can ditch, and what I need to find storage room for)...

So, probably not much hobby time today, but I hope to be able to report some progress tomorrow!

'Zulu!' and 'Zulu Dawn' have long been my favourite films depicting redcoat action in the Age of Imperialism, and I have felt the itch to get some action going on the South African plains (and as any native Africans can easily be pressed into service for Pulp games, this is actually a no-brainer).

I have now set out to scratch that itch, first getting these books from Osprey:

Heroes, Villains and Fiends contain rules for using Zulu in IHMN, so I expect to start making a Company or two of Zulus (unmarried and married springs to mind), and one of Brits, then perhaps expand by making Pulp Alley leagues of some of the other native peoples available (like Ngoni, Matabele, Pygmies, Azande, and perhaps some 'fantasy' cannibals and other imaginative Africans).

At first, I thought about doing Colonials in 1/72 plastics as I already have some Esci Zulus and British infantry for the Zulu War (1879), but there seems to be a limited supply of figures for this period; although a lot of sets have been made over time (notably from HaT), only a few seem available at the present.

So, I end up - as usual - collecting and painting 28 mm sized stuff, and as I remembered to have a box of these, I dug it out and have begun prepping a few redcoats.: 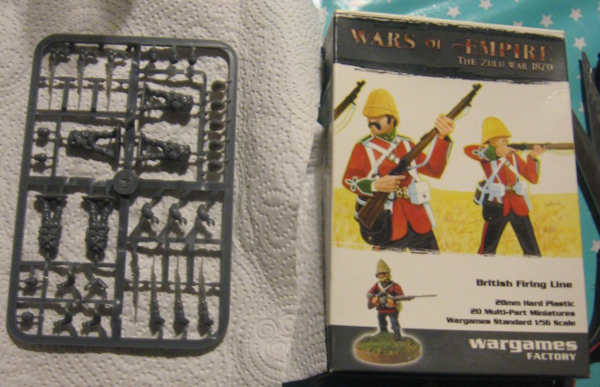 The models are not great, but I got the box as a freebie when ordering WGF's Republican (Caesarian) Romans, so no harm done in getting them a lick of paint so they can be brutally slaughtered by the natives of many a distant corner of the Empire.

I shall be basing them on 20mm washers, and go for a 'ready' or 'avancing' pose for as many as possible, as I really do not  like the sculpt of the firing right arm/hand - and I am primarily going to use these for skirmishing, so it only seems right to use poses better suited for open formations.

For the Zulus, I am almost set on getting the Empress/Warlord Zulu Starter Army, which should keep me occupied for several gaming seasons.

Just need to get that November paycheck...