Got these from Copplestone Castings today: 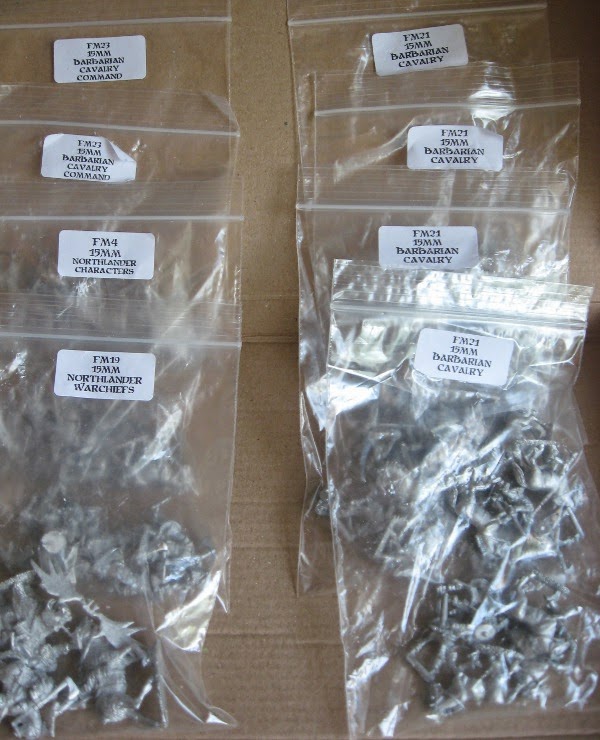 I have 24 pts Lords of Undeath QP army to complete, first (almost there), before i can start prepping these. I think I'll do them one unit at a time - 10 15mm cavalry models must be a manageable task!
Posted by Argonor at 14:28 No comments:

An Evening in the Garden.

We had a campfire, with sausages, twist bread, and marshmellows, yesterday evening, among the hazel bushes in the garden. 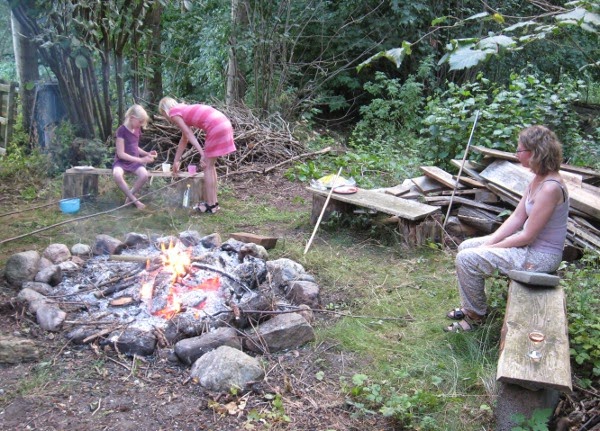 Another batch (the last for now) of 10 Mantic shamblers for various purposes. Among other things, I'll use them for Ghouls (4 units) in my Lords of Undeath GoB28 army, as soon as I have painted my fourth long OOP, rare, etc., etc., Citadel Ghoul to use as the leader of the fourth unit.

The blood is much better on these than on the previous batch, I think. This time, TCR was layered over Vallejo Black Red + Black highlighted with Scab Red. 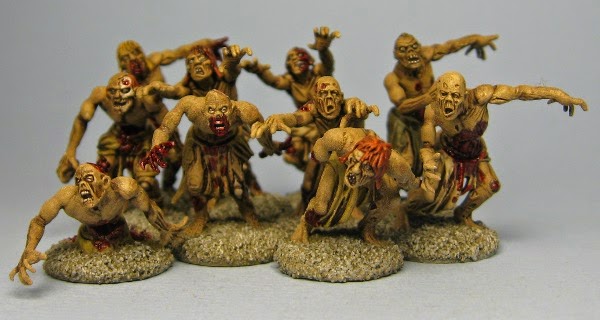 And a family photo:

I now just have to finish my boards (need paint), break out my old Mordheim cardboard buildings, and flesh out a couple of survivors, then we're Z to go!

Oh, and I need to make a template for randomized shambler movement, as I don't like the rule about moving in the direction the dice landed. No dice-rolling on my carefully textured and painted gaming boards - no, thank you, Sir!
Posted by Argonor at 23:41 No comments:

@Duregar and I introduced another almost local gamer, Marc, to Argonor's Attic, God of Battles, and SAGA, yesterday.

Marc brought his Dale and Laketown infantry that took the field aloingside some of my Rohan warriors, facing off against my Isengarders.

Pics of the battle: 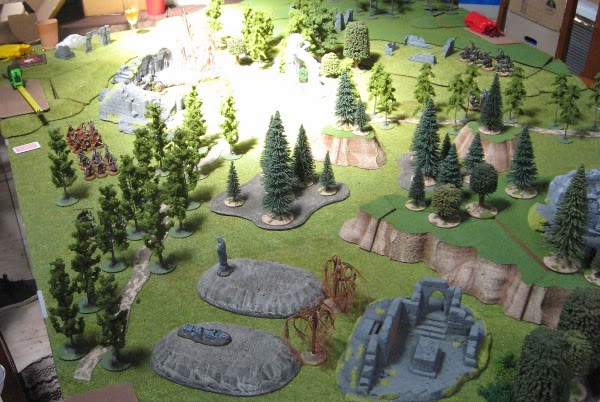 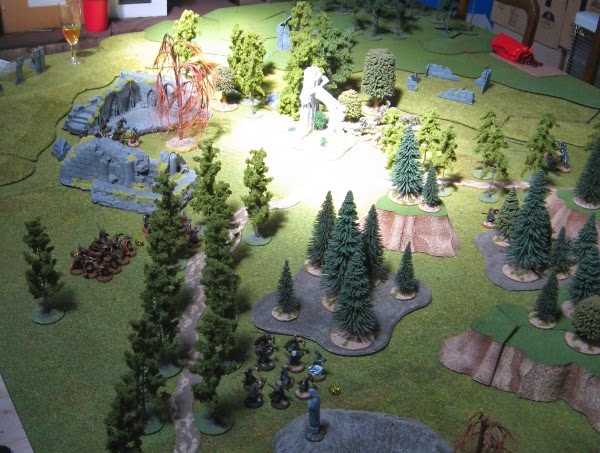 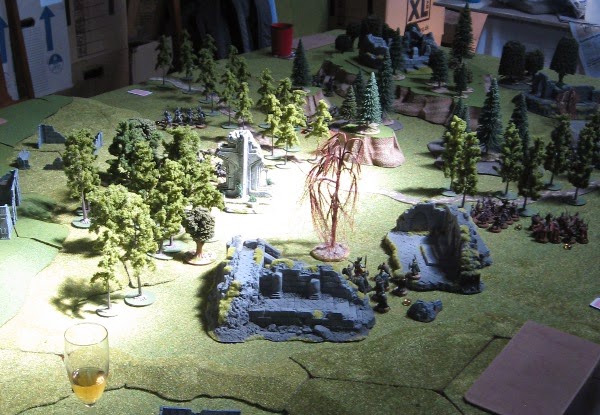 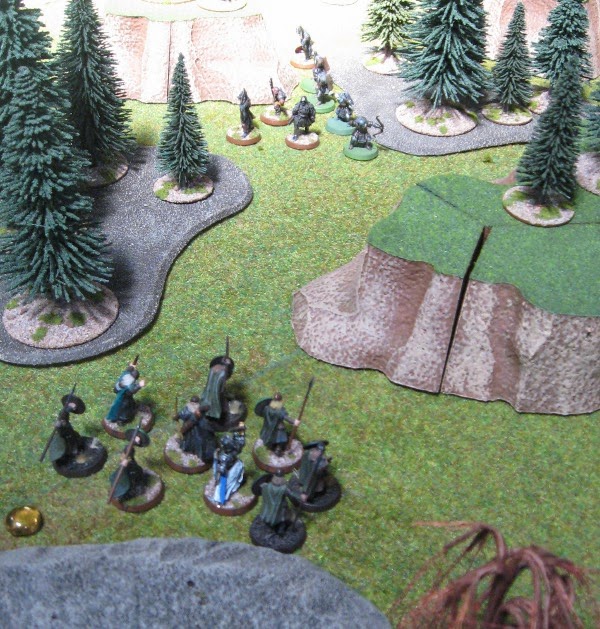 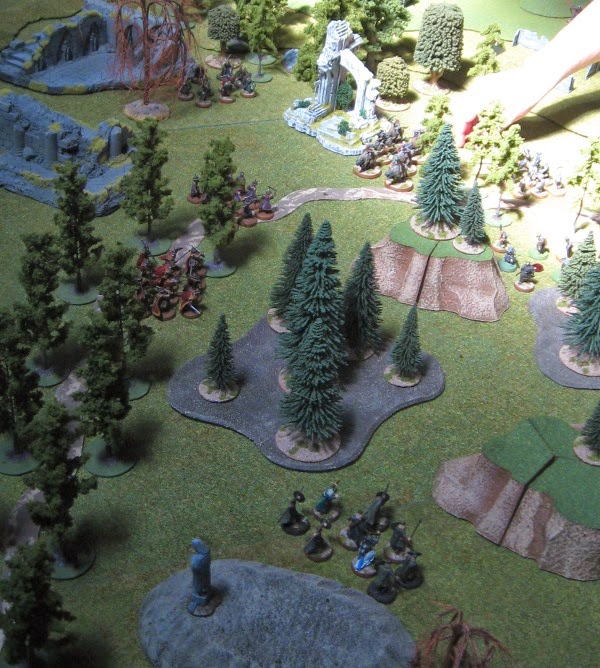 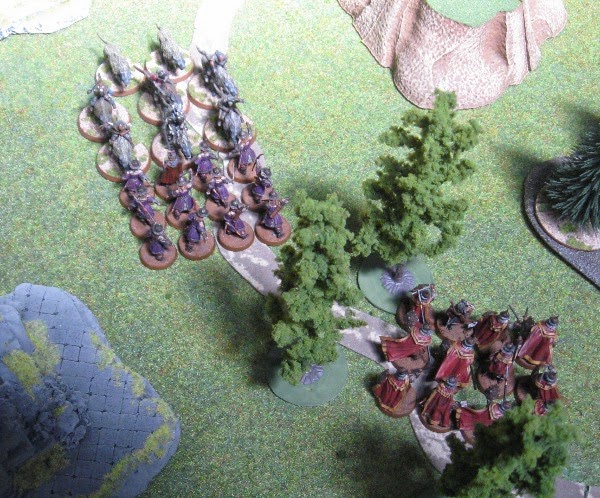 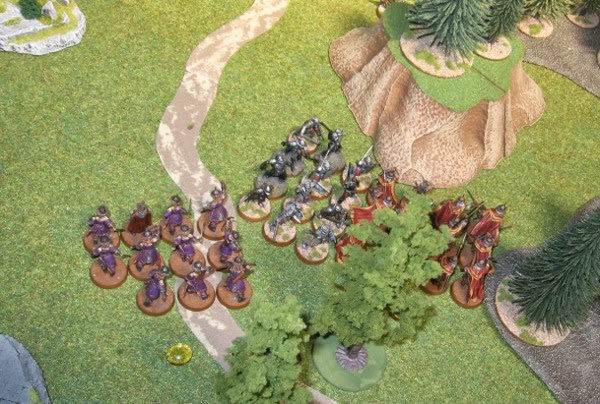 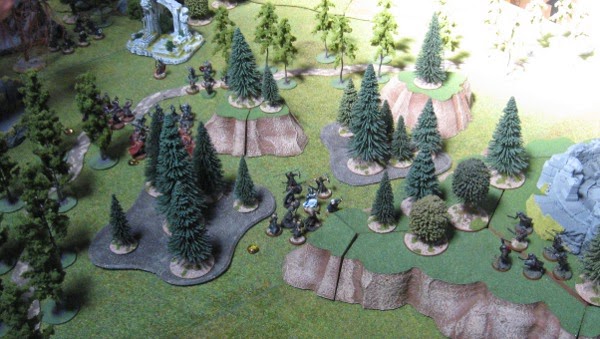 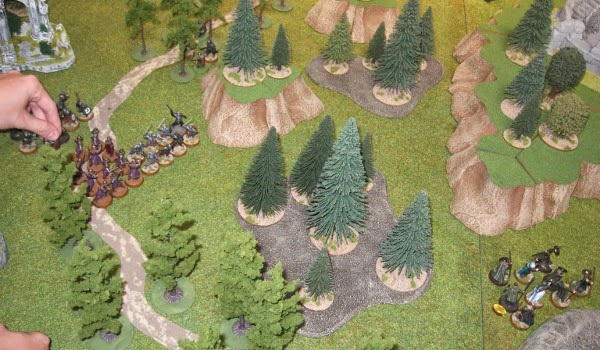 In the end, The Eastern Alliance carried the day, breaking the invading orcish horde.
Posted by Argonor at 23:44 No comments:

Last sunday, we took a trip to Denmarks old capital, Nyborg (Newcastle) where the annual Danehof (Court of the Danes) was held according to tradition.

Here's a couple of pics I took:

Email ThisBlogThis!Share to TwitterShare to FacebookShare to Pinterest
Labels: History, Medieval, Other Areas of Interest, Re-enactment

I am toying with the idea of starting up an ongoing multi-player Mighty Empires campaign with an un-traditional approach:

In ME each 'Banner' represents up to 1500 points of troops - traditionally chosen from a Warhammer army.

Instead of having 'Banners' represent a set number of points within a set games system, I plan to use the ME points system to show RELATIVE strenghts of armies clashing in battle. The exact compotion and strength of the fighting forces will be worked out by the players involved - AND with whatever scale of minis and game system they prefer (and can agree on). If the players can't agree on a scale and/or ruleset to use, the abstract ME battle rules will instead be used to resolve the conflict.

Let's say, a 500 points Banner and a 1500 points Banner meet up on a contested tile; the ratio between the armies must be 1:3, but the actual forces could be anything between small skirmishing warbands up to vast armies of thousands of 6mm or 2mm miniatures, as long as both players can field an appropriate force of the same scale. 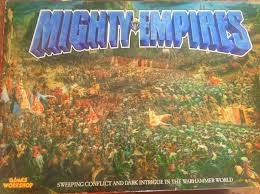 I own about 6 sets of 1st Ed,. and it should be possible to construct a fairly interesting board from the many cardboard tiles.
Posted by Argonor at 16:41 No comments:

I have begun making the table I'm going to use for my PSZ: Warhammer Apocalyse Z project: 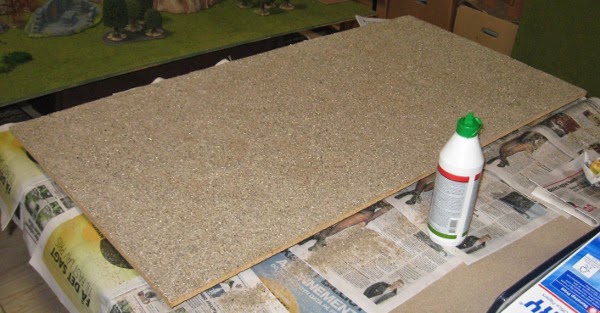 And the boards will be used for multiple other purposes, too, of course ;o) Funnily enough, it's the first time I do boards of this size, having focussed on smaller tables for skirmish gaming the last 10 years or so.

I expect to be ready for the first game just after the summer holidays!
Posted by Argonor at 13:31 No comments:

I have put up a large table with Gamescape and other terrain to accomodate my first game of GoB with 28mm LotR minis.

All I need right now is an adversary ;o)

The brown rectangular boards are bases for Camps and Baggage Trains - I'm going to glue sand to the surface and paint them with earth colours and do a bit bit of flocking, but otherwise leave them flat; that way I can use them for different armies with different styles of tents/carts.
Posted by Argonor at 13:21 No comments:

I think I've already somewhat spilled the beans about my plans for doing a Lords of Undeath army for God of Battles.

About 18 years ago or so I bought a second hand Warhammer Undead only rudimentarily painted army, mainly consisting of plastic skeletons (Skeleton Horde and the likes), and I also at some point bought the Skeleton Horde box myself, of which I only assembled and painted a score or so.

Now, finally, it's time for the risen to march forth in splendour!

I have been thinking about getting a force ready for the table for quite some time, but GoB is going to be the spark that kindles the Secret Fire in me.

All the finished, partly finished, primed, and naked assembled minis are based on square slottas.

I have been contemplating rebasing them onto round slottas, but doing this without ruining the paintjobs on the finished ones is hardly possible, so I have been endlessly postponing this task.

Then it struck me just today:

With my Dremel, I can cut out a part of the square slotta around the feet of the mini. Then I can use that part as if it was an integral base to glue the mini to a steel washer - thus solving the magnet/storage problem with the same stroke!

My initial 24 points quick-play force will be a fast forward advance guard/scouting force consisting of 4 Ghoul units, and one Undead Knight unit.

I have some painted Oldhammer Wights that may see service as Blacksouls and/or unit leaders as the army comes together, and for the Ghoul units, being made up of Mantic Zombies, will be led by Oldhammer Ghouls.

As soon as I have finished the third batch of 10 Mantic Zeds, I must get some boards ready for Warhammer: Apocalypse Z, and then I'll finish painting a partly done Ghoul to use as leader of the 4th unit (then being able to field 4 units of 7 zombies + 1 ghoul each). I already have 3 or 4 painted Skeleton Riders for the Knight unit, so it should be a matter of mere days to get the last unit ready!

I have 2 LotR quick-play forces standing ready on an elaborate table in the attic, just awaiting the Camp and Baggage Train elements, for which I started making bases of hard fibre board (masonite) yesterday.

Things are moving at the moment, I just hope I can keep up the momentum!

Finished this second batch today. Bases are awful - the highlighting colour is too thinned down to use for a proper drybrush, so I may apply a Devlan Mud wash to get some definition back into the texture.

The blood looks a bit too much like wet red paint in this picture - not quite so much IRL.

The shamblers will - like everything else I do these days - serve multiple purposes; Pike & Shot AND Zombies. Dead walk Again, Ghouls for GoB28, zombies/ghouls/cannibals for WWWII, CROM!, Pulp Alley, Strange Aeons, and Von Unaussprechlichen Kulten, etc.
Posted by Argonor at 21:23 2 comments: