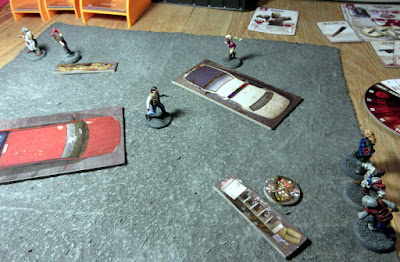 As mentioned in my previous post, from now on I followed the movement rules as intended, so this Turn, Brian chose to run!

This, of course, drew the attention of the bimbo Walker, who caught up with him.

Getting face to missing face with the blonde bombshell obviously became too much for Mr. Blake... 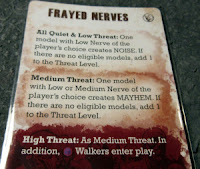 This Turn's Event was 'Frayed Nerves', which at Medium Threat says that 'one model with Low or Medium Nerve creates Mayhem (he probably cried out, or fired his gun in vain).

Mayhem makes all Eligible Walkers within 10" move towards the source, and now things were really heating up. 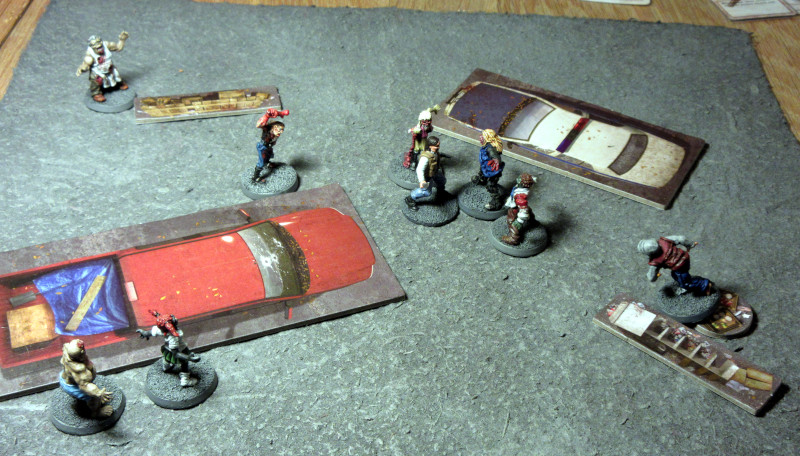 The Threat Level again was increased as a consequence of the Melee. It seemed about time to get things wrapped up if Brian was not to be completely overwhelmed! 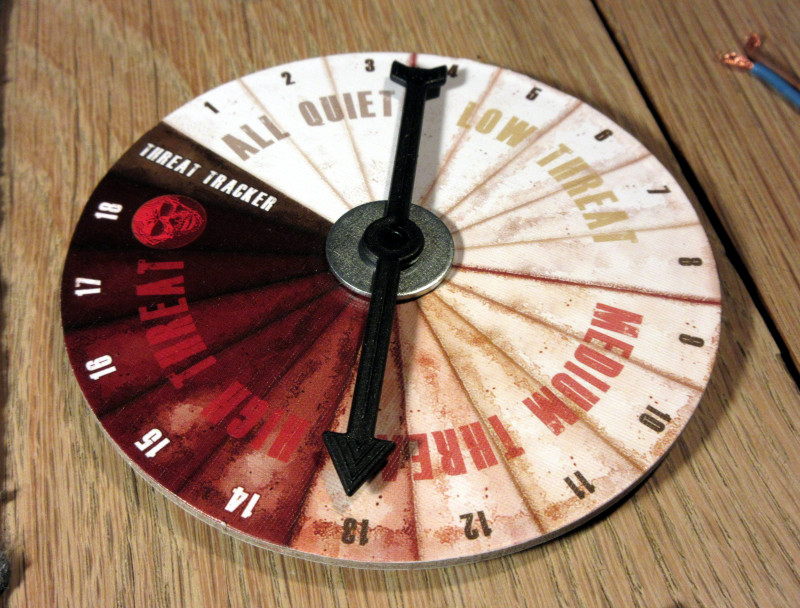 As Brian was fighting two Walkers this time, they rolled THREE Red Dice. The rules regarding weapons in hand and swapping between 'pack' and 'hands' are not introduced until the third scenario so I hope the way I calculated Brian's dice  was correct (I do not remember which weapons I used). 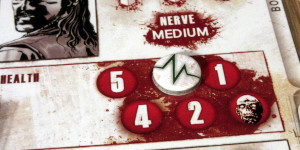 Correct or not, Brian lost the fight, was pushed back, and lost another point of Health.

No prone Walkers at the end of the Turn, so Brian cound now concentrate on getting out of that tight spot, and he ran towards the corner of the area. 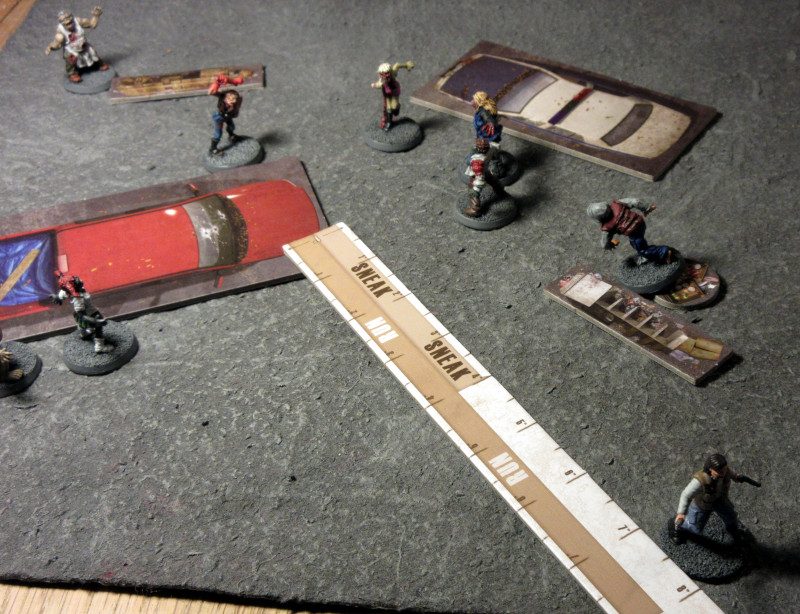 This drew the hoodie into contact with him, but this was clearly preferable to being swamped in the center! 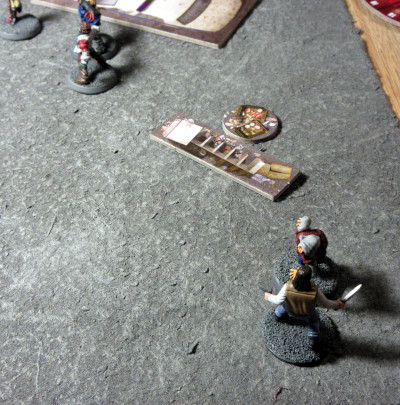 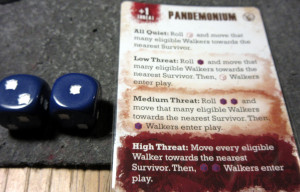 I think I forgot to add the +1 Threat before applying the Event effects, as it seems I applied the effects for Medium Threat. 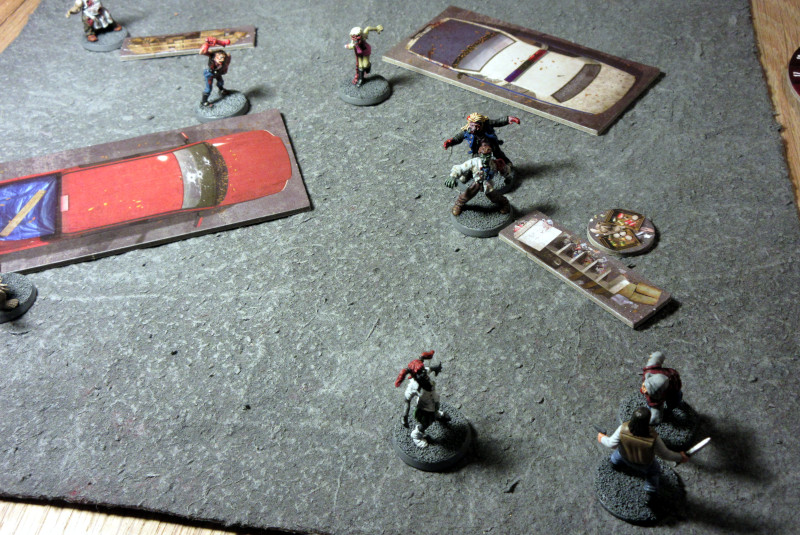 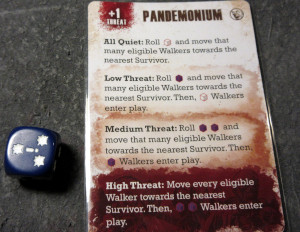 ...and another three entered the game. 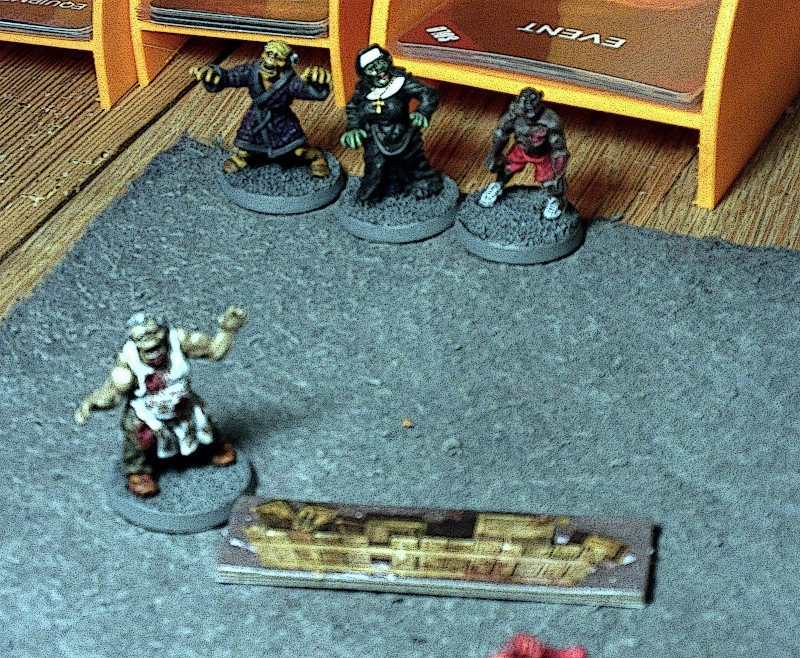 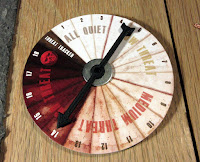 The Melee increased the Threat Level, and Brian managed to wind land a Head Shot, thus eliminating the hoodie.

No Walkers were prone, so we skip to the next Turn. 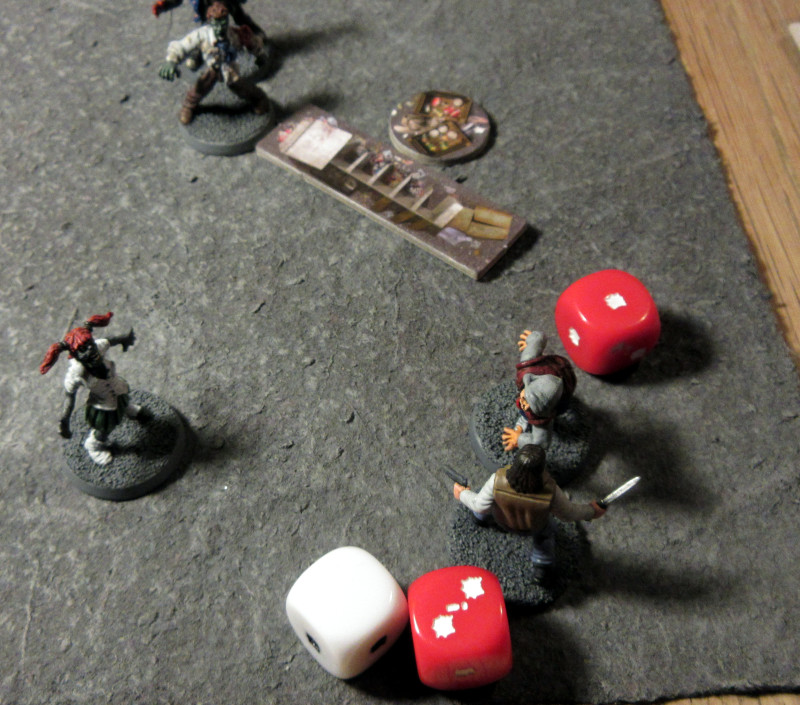 Eager to get the job done, Brian ran to the last Supply Counter, which allowed the closest Walker to engage him. 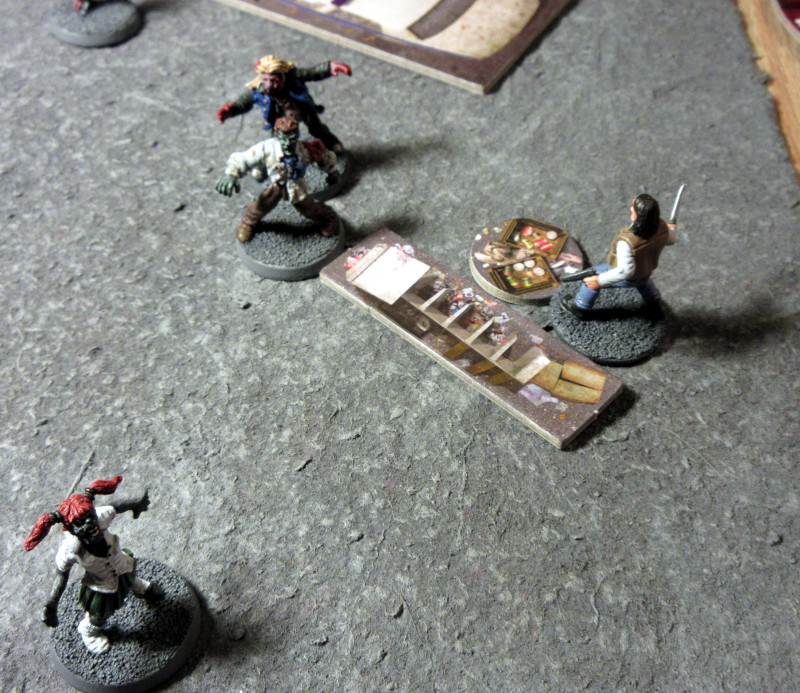 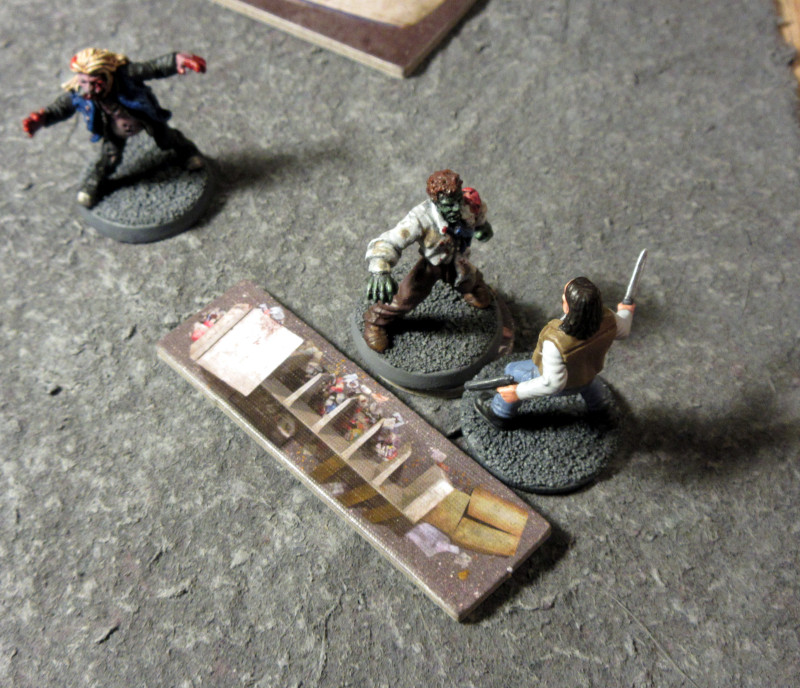 Luckily, no unengaged Walkers were close enough to lurch at our Survivor, and this Turn's Event allowed me to move a couple of shamblers away from the action.

Suddenly, the situation looked manageable, Brian just had to defeat the whitecollar, search the Supply Counter, and get the Hell out of there... 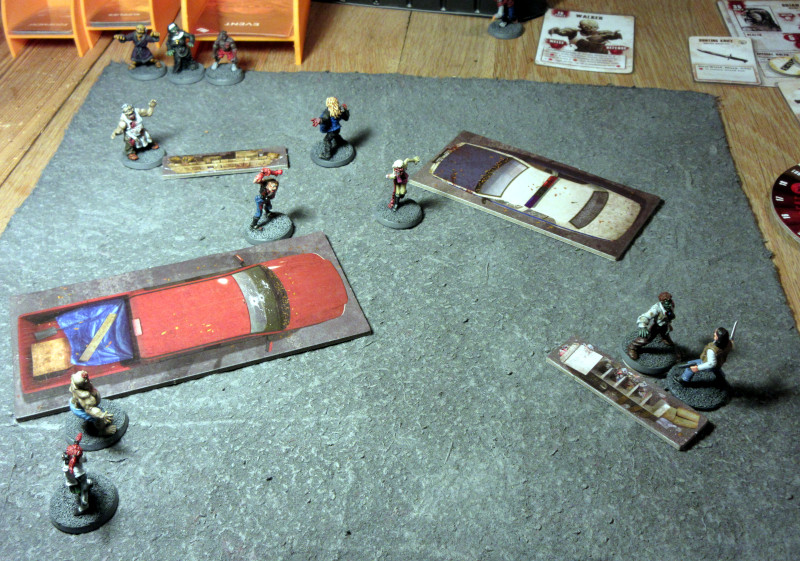 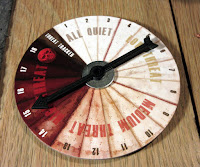 The Threat Level was getting dangerouly high (remember, at least at one point I forgot to move the marker), so now Brian would have to get his act together to get out in time!

Luckily, he managed to defeat the whitecollar, thus freeing up the Supply Counter, and Victory was now within grasp! 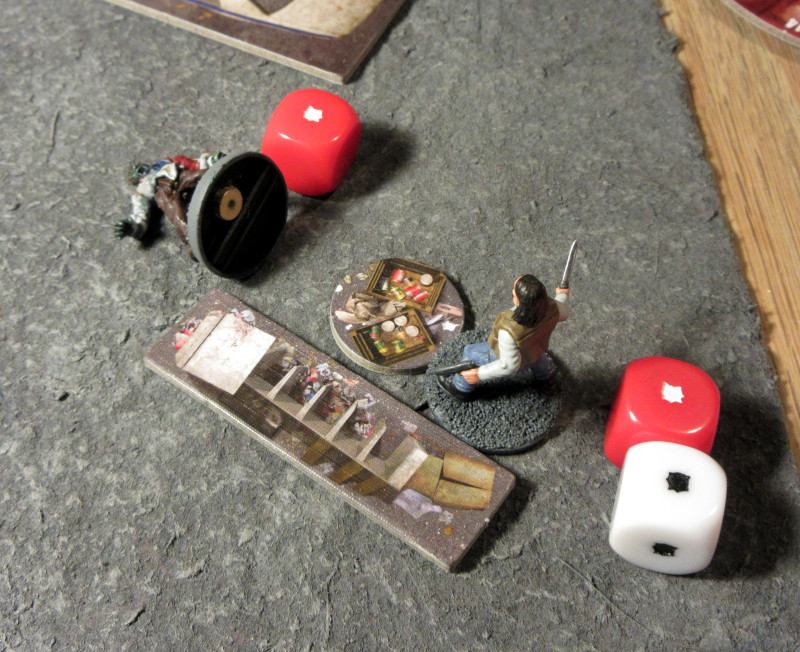 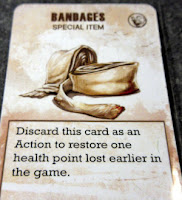 The Walker did not get back up at the end of the Turn, and Brian could search the Supply Counter as his first Action.

If this had not been the last Supply Counter, Brian surely soon would have dressed his wounds with the found Bandages, but as it were, he simply ran away to (relative) safety with all five Supply Counters. 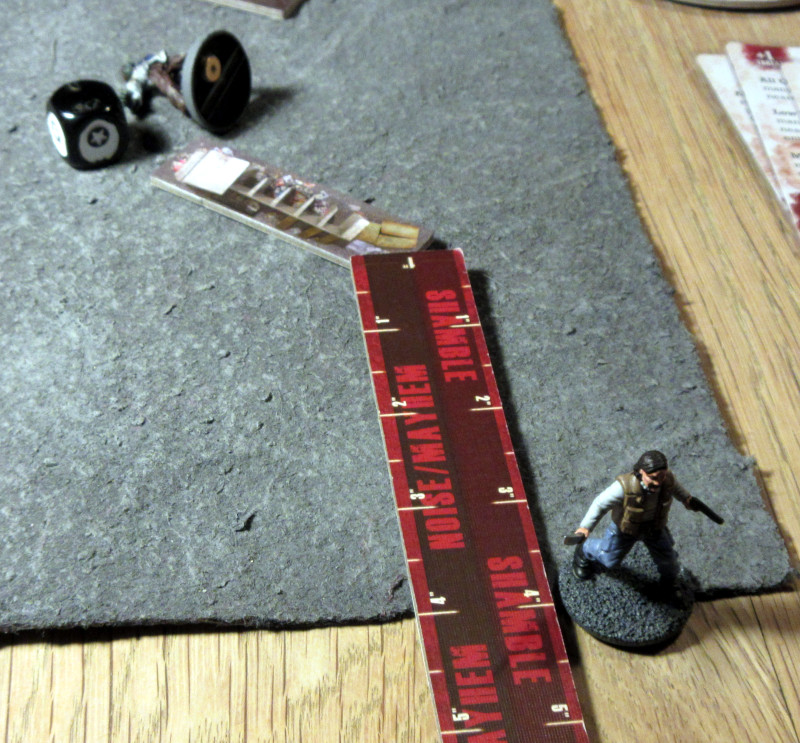 This last picture shows the lay of the land at the end of the game. 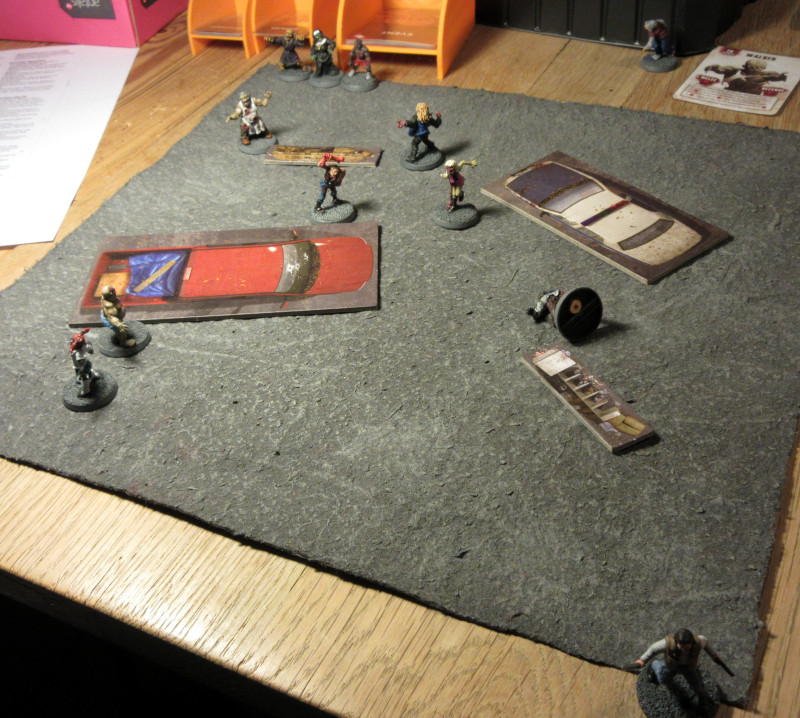 Even with the mistakes I made along the way, it was an entertaining game! I think am ready for the third scenario, but I do not think that I am going to record it as meticulously as the first two, for two reasons:


I think I want to dig out some die-casts to use instead of the flat counters, and I may also be able to find some wooden fences  to use as barricades, and I expect to be able to find time to play somewhen during next week!
Posted by Argonor at 11:38 No comments: