Pike & Shot and Zombies plus SuperSystem

It's still too darn hot to fiddle with small bits o'lead and plastic, but I have been digging out some of the rulesets I bought a couple of years ago - SuperSystem 3rd Ed. and - as the headline says - Pike & Shot and Zombies. 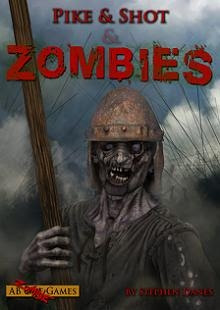 I am determined to get a game of SuperSystem organized, as I have already painted to factions of minis and generated their profiles (for 2nd Ed., so I have to work them over to check the points
values), and to get some Mantic Zeds for PSZ, which I intend to play as 'Warhammer Apocalypse Z' with the option of playing survivors of the various races from that setting (which should make it easier to recruit players).

I already have begun making racial adjustments to the survivor generation charts, and I now have to get me some Zeds... the upside is that it will at the same time put me back on tracks with the Dead Walk Again 'Zombiecalypse Now' project, as the Mantic shamblers are sufficiently generic for using in a modern setting, too.

My goal is to stage the first game before Oct. 1st, and maybe bring the game to Horisont in Esbjerg (if it occurs, and I don't have to work that weekend).

The painting method will be block out skin and shroud, wash with Devlan Mud or the likes, drybrush original colours, pick out visible intestines, eyes, teeth, nails/claws, and maybe add some blood splatter.

I hope to be able to finish 10 zombies in a single paint session this way, but I'm out of practise, so I'll just have to see about that. My gaming pal Ulrik has painting sessions at his appartment every other Saturday, and I may pack up the minis, brushes, and paints to go there a couple of times to get some Work done without the distractions of Family life. And maybe get some of the other guys there interested in a game or two....
Posted by Argonor at 17:35 No comments:

We have the first real summer in 3 years here in Denmark, temperatures crawling up towards Celsius 30, and even the evenings are too warm for sitting indoors. Thus, not much progress with anything, but I've managed to play a few games of X-Wing and my second DreadBall game against a live opponent.

I played Marauders vs Forge Fathers in an interesting game that was hard-fought and in which victory once again slipped through the fingers of the stunties in the last moments (missed a 3-point Strike attempt in rush 13). Close, though.

I have taken (a lot of) Pictures of a run-through of the beginner's scenario for X-Wing, and after editiong the photos I'll start writing up the AAR. Don't hold your breath, though, as I wrote, it's very hot, and I'm not likely to spend much time in front of the laptop right now...
Posted by Argonor at 09:13 No comments:

We've been away for a couple of days, visiting my in-Laws near Haderslev, where the kids spent all week. Yesterday we took a one-day trip across the Danish-German border to visit Flensburg,  and in a games store called Gandalph I bought a German version of the X-Wing starter set (I speak and read German fluently, so it's not an issue), as all game components seem sold-out here in Denmark.

This morning I explained the basic rules for my 10 and 7 years old aughters, and they grasped the concept immediately, so we played the beginner scenario with my youngest offspring taking conrol of the X-Wing fighter, and my eldest daughter and I taking control of one Tie-Fighter each.

After a tense dogfight, I managed to tail the X-Wing and bringing my laser cannon to bear in two consecutive turns, which won the day for the Empire.

The game is EXTREMELY well designed, and the large amount of high-quality double-sided thick carboard punch-out counters and accesories, combined with the hand-painted miniature starfighters, the high-end cards and  rules booklet, and a tense, tactical game-play, provides much value-for-money.

You SHOULD, however, consider buying at least two starter sets, as having more counters, dice, rulers, etc. (and double-up or more on the ships), will probably enhance the gaming experiance even further.

The game mechanics are simple enough for even younger kids to appreciate, yet the full rules present enough tactical options for the experienced gamer to delve into - and the option of adding more and/or other ship types to the game is just an added boon (I'm still awaiting an order of another starter set and some additional fighters to be fulfilled by my FLGS).

I'm already envisioning large participation games with swarms of Tie-Fighters trying to fend off Rebel attempts to break through to make bombing raids on Imperial installations of some sort, and maybe even the attack on the Death Star from Episode IV... only the imagination sets limits!

I shall make a step-by-step AAR with pics of another game soonish - leaving the manouver-rulers used for moving the ships behind the moved pieces provide a good impression of the tightly intertwined flying involved, and I shall try to use this to good effect when taking pictures of the action.
Posted by Argonor at 22:11 No comments:

This one is almost there - taken without macro and still with a single light source.

I need to dig out a couple of additional lamps to start fiddling with multiple light sources.

I like the way things are going, and am confident that I'll be able to produce some good pictures of my future activities!
Posted by Argonor at 17:07 No comments:

Experiments with the Light Box.

These are not as sharp as I wanted, but I probably should not use the macro setting from this far away. But the white paper screens seem to block out the usual yellowish sheen, which is a BIG Progress.

I need to try setting lights from more than one direction, trying different settings on the camera, etc., and I may have to use slightly thicker paper for the screens.

Next on the to-do list is also managing the background; I may have to invst in some A3 sized (or larger) sheets of thin cardboard/thick paper to place behind the objects I want to photograph.

Next step on the minis, btw., is to use a small spatula with some filler to smooth out the filled parts of the bases, before I finish them by filing the filler into the desired shape.﻿
Posted by Argonor at 20:16 No comments:

It didn't take me long - actually I built this in less than an hour, and it cost me less than €2. 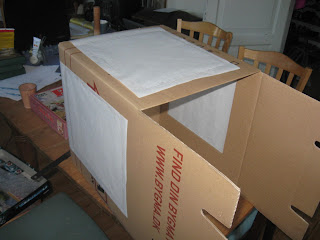 I think I need something to attach backgrounds to, but all in all I only need to add light from the top, the left, and the right, and I should get a softer light for my macro-setting pics of minis and other stuff.

I'll try it out on my WIP DreadBall team tomorrow, if I can find a lamp for the top light. (And, no, I have made no further progress with the team.)
Posted by Argonor at 20:35 No comments:

As per the headline, I'm planning to build a light diffusion box for taking picures of minis and terrain pieces.

I'm going to use a cardboard box with sections cut out and covered with white silk paper or a thin fabric on top, left and right, so that I can place light bulps on the outside and get the light diffused inside the box.

More when I have gotten the materials needed.
Posted by Argonor at 15:37 No comments:

Well, not really, I just have no luck with the dice when playing them.

I have underestimated the FF Jacks ability to handle the ball; compared with their ability to Slam Back with Strength 3+, they stand their ground better than the average human Jack, while being just as good at handling the Ball. A throwing play with a Striker and a couple of Jacks is a doable tactic, and likely to result in a lot of 1 or 2 point Strikes, while the Guards grind the opposition to a pulp.

But I need those advances to make every play count before the FF are likely to start winning some matches.

I the meantime, summer has finally hit the shores of Denmark, and outdoor life is going to take up much of my time, as the garden, the kids, and the upcoming vacation have to be taken care of.
Posted by Argonor at 16:58 No comments:

8 human players finally cleaned up and glued to washers (24 mm). In addition, I have cleaned the refbot, and glued it to a 20 mm washer (I still have a few left from an overseas order I made couple of years ago) - AND I cleaned up the two balls.

I also put the first layer of filler on the bases of the players and the refbot. WIP pics to arrive soonish I didn't want to bore anyone with shots of each and every little step of progress, but this is a milestone reached - and if anyone reading this is wondering how I'm doing the bases, pictures tell more than a 1000 words.... well, just about...
Posted by Argonor at 16:37 No comments:

Slow progress, but almost there...

I have almost finished cleaning up the starting human team for DreadBall, and I have glued the first 7 players to 24 mm washers. I hope finishing the team, and get the refbot and ball cleaned, too, and get some filler om the bases of the team and refbot over the NeXT couple of days.

As soon as the team is ready for priming, I'll go back to working on my zombie project, assembling at least 10 Zeds between each DreadBall player. And, of course, start getting some paint on the human team.
Posted by Argonor at 21:57 No comments:

Been quiet for a while...

Real life got in the way the past week, but I introduced my two girls to Risk this weekend, and while not strictly speaking a war game, it's stil a game of war and conquest, so I'll let the 3 games we played while being home alone (my wife was away for a 'high school' (US-English) re-union) Friday and Saturday count towards my 'played' total.

Plans for today are to get the first DreadBall Striker cleaned up, and get all the previously done players glued onto 24 mm washers (they fit snugly inside the hexes on the pitch).

It's a funny thing with the washers; here in DK it's completely impossible to buy 25 mm and 20 mm washers, and I can get all sorts of other sizes (16, 18, 22 (I think), 24, and 30 mm + larger sizes), so I have decided to start using 24 mm instead of 25 mm, and 18 mm instead of 20 mm for zombies - the difference should not be too visible. As for 22 mm, if they are availble, which I think I've seen, I'll use those for minis where 25 mm seems too large, and 18 mm too small. My final plunge away from the standards set by slottas, but, well, it's just too expensive to import large quantities of metal washers by post.

Hopefully, I'll get another game of Forge Fathers vs Veer-myn done tomorrow or Wednesday...
Posted by Argonor at 13:05 No comments: