With the labels printed and applied, this batch is finally completely done. The text centering is off, I know, it looked right on the screen; I suspect my printer is shite... 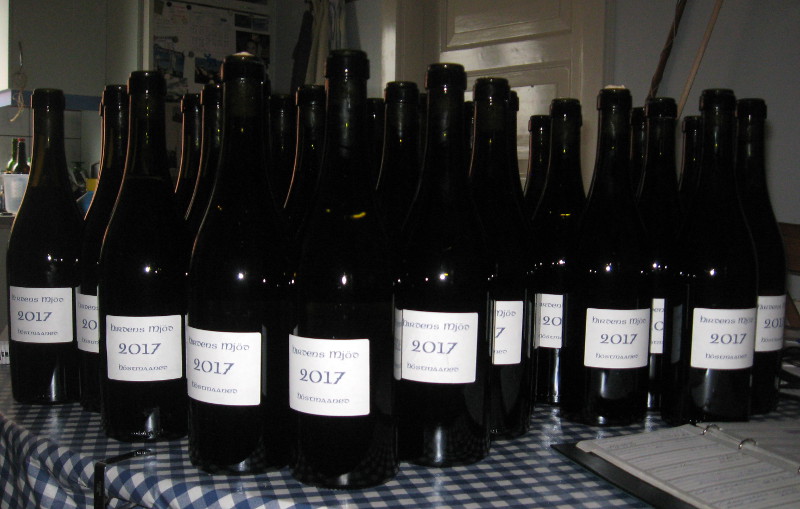 I poured 1st half of the brew into the fermenting container with the yeast-starter this morning, and after just a few hours, things seem to speed up already. (I should have somehow turned the video 90 degrees, I know, but I have no idea how it is done, if possible at all)

And, hence I am preparing the yeast-starter for my next batch of mead. It now has to cool to below 35 Centigrades before I add the yeast. This evening I shall prepare the first half of the honey/water mix so that it can cool over night, and I can pour it into a plastic fermenting container with the yeast-starter. If everything goes to plan, the fermenting process should be complete around Christmas, and I can then siphon the mead onto a glass demi-john for settling. 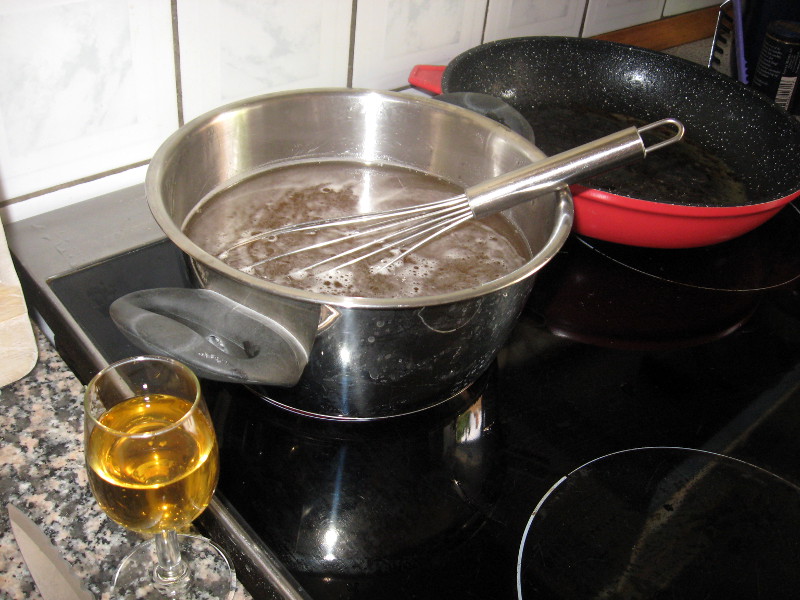 Another 34 Bottles of Mead. 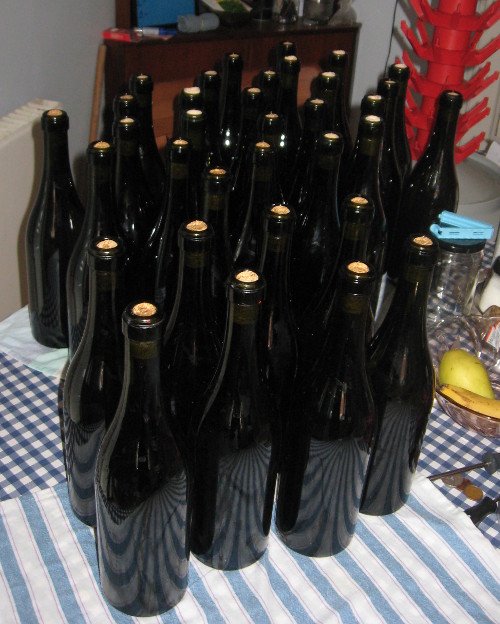 My hard toil cleaning the bottles finally paid off, and Friday I could finish off my ninth batch of mead by corking 34 bottles for the cellar.

All that remains for me to do is cleaning up the bottles, and printing and applying some labels.

Very soon, I am going to start up another brew (#13), and then slowly begin to prepare another batch of bottles (I still have three more demi-johns/carboys containing about 25 liters each sitting in the basement, awaiting getting bottled).

Time-consuming as it is, brewing mead still feels so rewarding when another brew has been completed and is ready for enjoying!
Posted by Argonor at 17:20 2 comments:

Email ThisBlogThis!Share to TwitterShare to FacebookShare to Pinterest
Labels: Brewing, DIY, Mead, Other Areas of Interest

I recently purchased two sets of metal minis depicting Sharpe and his chosen men of the 95th from Brigade Games. I plan to get at least one of them painted for the Alliance of the Big Battalions Painting Club at the Lead Adventure Forum (if I can find the time for it, that is...) 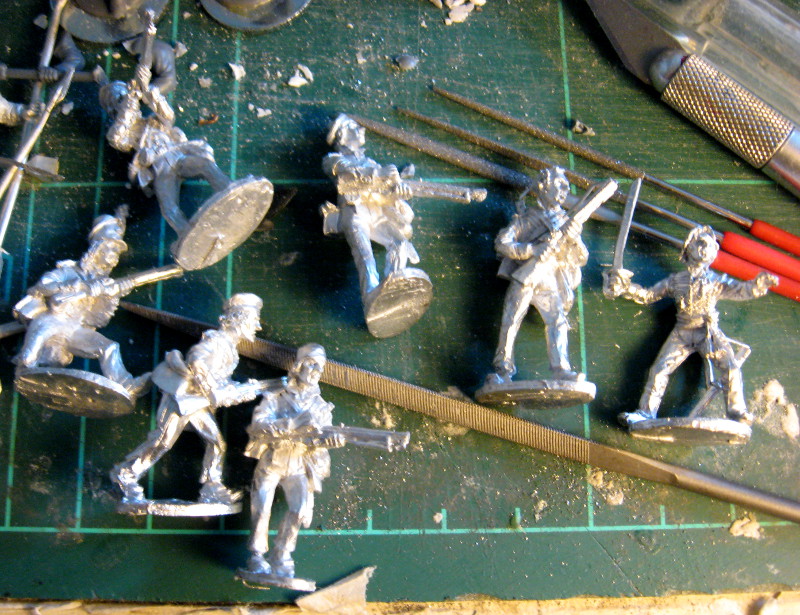 Unfortunately, these sculpts are quite tiny, and I wonder how they will scale up against other contemporary 28 mm napoleonics (I fear they may be closer to 25 mm). As I intend to use them for skirmish games, it may not be that big a an issue, but it is a shame if they stick out too much against other minis.
Posted by Argonor at 08:43 No comments:

One of the handles on the skylight had become brittle, and was about to break apart, and as my financial situation is a bit strained at the moment, I had to find a cheap solution. 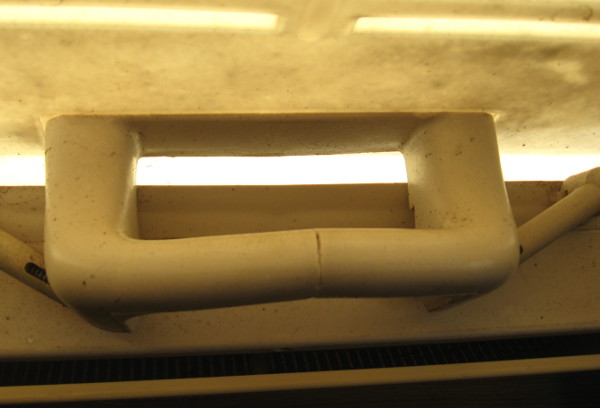 As you can see, the handles are hollow - which gave me an idea. 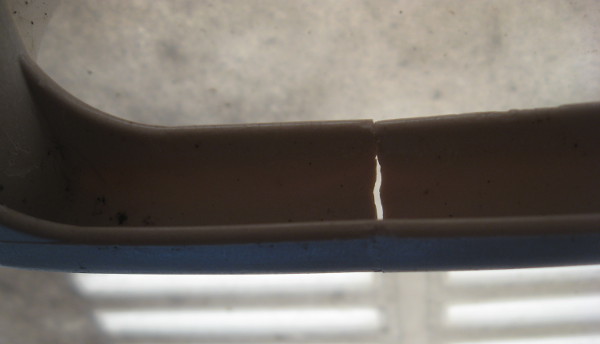 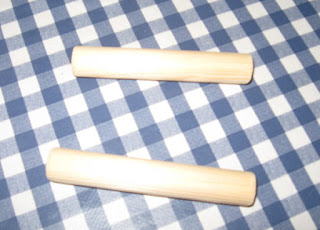 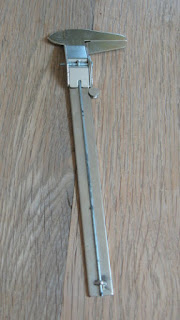 I used a caliper for measuring the inner diameter of the handle, as I figured a piece of dowel would fit inside.

As it were, the inner diameter proved to be 16 mm, and I asked my wife to buy a length of dowel that thick. I now have about 2.30 meters of unused dowel, as the DIY/builders' stores here do not sell smaller pieces...

Below you can see a piece of dowel glued in place in the intact handle (I decided to strengthen that one, too, to prevent it from breaking). 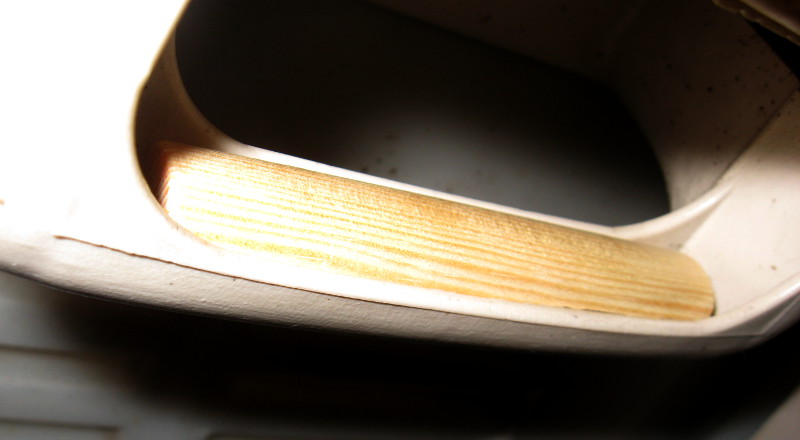 The broken handle also had dowel inserted, and I furthermore wrapped it with some cotton ribbon, to stabilize it further. Looks like shit, but I expect it to do the job for a season or two, until I can afford replacing the entire skylight. 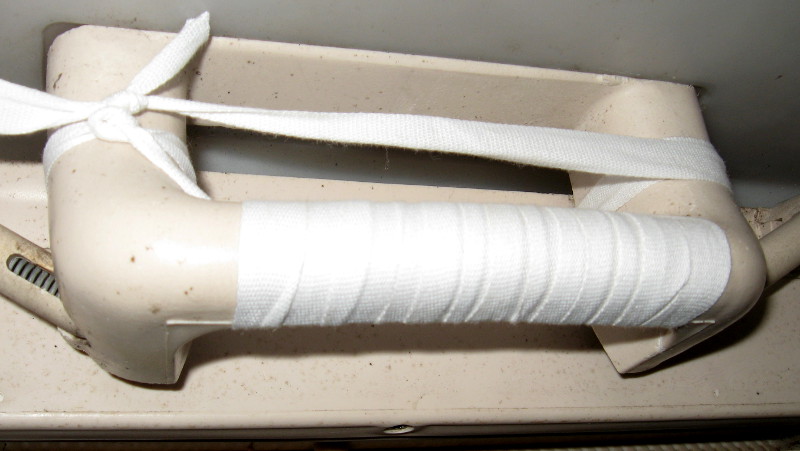 The only things left to fix are the table tops of the 'kitchen' section, as they have been damaged by something falling on them - not absolutely necessary to use the caravan, being mostly an aesthetic problem, but I expect to be able to level the holes with some filler, and then cover the table-tops with some self-adhesive foil. More about that at a later time, though...
Posted by Argonor at 20:00 No comments: 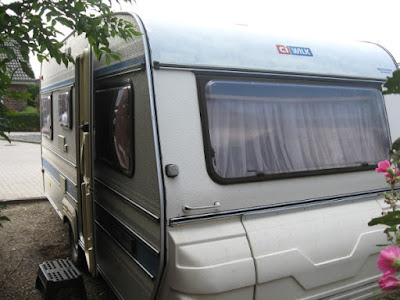 Yes... with bleeding heart I am giving up going on vacation with my trusty Eccles 1963 which my father purchased before my birth and of which I have thousands of fond memories from family vacations as a kid and young adult, and which have given my kids their first vacations abroad, namely in Italy, Spain/Catalonia, and Sweden.

The kids, notably Anna, have grown out of the bunks in the Eccles (Anna has a condition with the knees and cannot sleep with her legs stretched, so I slept under Lea on our trip to Sweden this summer), so it was time to find another solution. 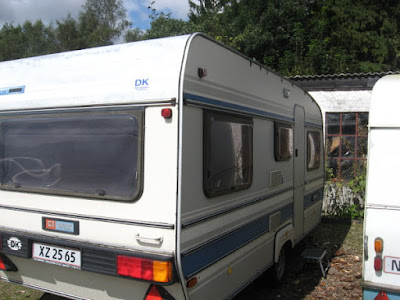 I joined a couple of groups about camping on Facebook, and fairly soon I came across this Wilk from 1989 - which was for sale in Kirkeby, only about 10 kilometers from here.

The girls and I went there to have a look, and both Anna and Lea immediately took a fancy to it - especially the unoriginal upper bunk over the front seating area seemed perfect, as Anna in particular needs some space when sleeping.

We pondered a bit about it, then went there again, this time with my wife so that she could have a closer look. 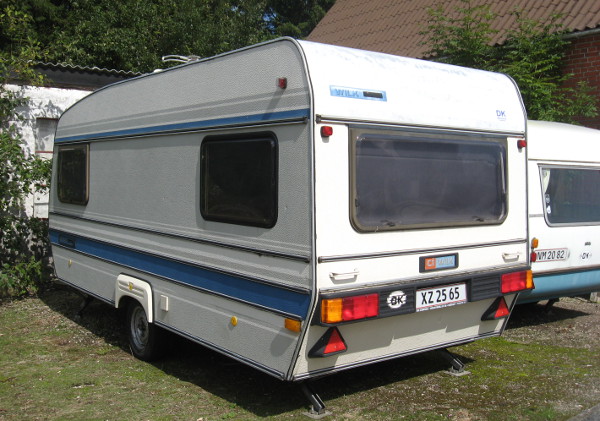 In the meantime, I looked at a lot of other caravans, but most of them either did not have bunks (a definite must), had too short bunks, or were well outside our current financial reach.

So, when the owners contacted us some days later to tell us, they had a couple of other interested parties, we decided to buy it.

As soon as we got it home (about a week later, because we had some firewood delivered and needed to get it into the shed to clear the driveway), Anna and Lea moved in.

They actually right away set about 'decorating' the bunk area (which can be closed off with a couple of sliding doors), and slept in the trailer several nights just at the end of their summer holidays.

I never thought I would be the owner of a camping trailer/caravan with a bathroom/toilet room (which I, frankly, find a bit obsolete, as most camping sites I have ever visited have had sterling sanitary facilities). I may come in handy at those rare occations when no public toilet is available, and somebody really needs to go, but I expect it to be used mainly for storage, and/or changing clothes.

Being almost 30 years old, of course the trailer has some wear and tear.

I had to get a front light replaced before inspection (older caravans must pass an inspection when changing owner), and one of the support legs had to have a bushing or socket (not sure which term is right) replaced for it to work - but now only minor stuff needs doing, which we should be able to do ourselves.

My biggest concern with this is our current car. The trailer is about twice as heavy as the old Eccles, and we only sport a 1.6 motor in the Suzuki.

The former owners told us, they drove the trailer with 1.4 motor at first, and that it, of course, required using the gears a lot, so I expect that if we stay away from too many mountains, we should be fine.

I still intend to persuade my wife to get a car with at least a 1.8 motor the next time, though, as I fear that long trips may wear down the Suzuki a bit too much... 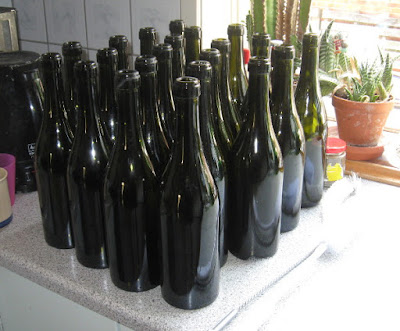 Well, I realized that the batches of mead in the basement have been ready for bottling for a while, so I set about getting ready for the first one.

I already cleaned these bottles, but they had been sitting on the bottle-tree for a long time, and when it comes to sanitary precautions, 'better safe than sorry' seems to be the prudent course of action.

Of cause I carried the mead up from the basement well in advance to make sure that any stirred up sediments have time to settle before I bottle the brew. 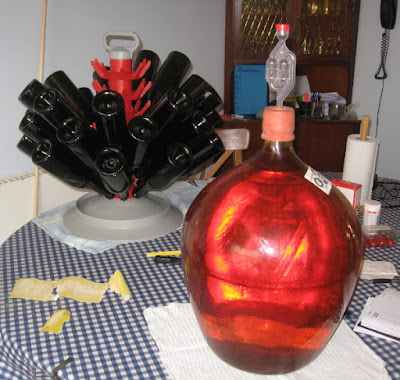 I expect to have all the bottles needed for this batch ready tomorrow (cleaning them with the bottlebrush does not take a lot of time, but rinsing them does), and if I am done cleaning before noon, I may well get the brew siphoned onto the bottles, too.
Posted by Argonor at 13:18 No comments:

Email ThisBlogThis!Share to TwitterShare to FacebookShare to Pinterest
Labels: Brewing, DIY, Mead, Other Areas of Interest

Well, it has been quiet, lately. Too quiet for comfort.

With both my regular gaming buddies busy with house renovation projects, a confirmation, and a vacation, I have not had much time/motivation for doing hobby stuff over the summer.

With the kids' summer holidays ending this coming weekend, I an going to have more time alone when not sleeping after night watches, and as there is a new Painting Club running at the Lead Adventure Forum for which I have ordered and received some minis from Brigade Games (nice, fast service from across the pond, btw), I expect to slowly get started up anew during next week.

I hope to be able to get a SAGA game or two arranged, soonish (had to cancel with Kevin a week before Anna's confirmation, as I felt a bit stressed by the preparations), which should help me get motivated for continuing my Viking army project.

All in all, the hobby season seems right around the corner. And then there is 3D print...
Posted by Argonor at 20:05 No comments: