Sunday afternoon I was visiting one of my oldest friends and gaming buddies, Michael, with my entire family, and I was bringing my 1/72 Bavarians, some terrain, and the Black Powder rules for a test run.

Archduke Michael had dusted off his Austrians and we set up two roughly equal forces (we do not tend to fuss about with points values).

I had prepared army lists with troop types and profiles for both sides, so we could get stuck in fairly quickly.

We played on my new 3x3 mat, using cm. instead of inches, each battalion 8 figures (1 rank = line, 2 ranks = attack column, 2 files = march column), cavalry regiments only 4 figures (normally, I would use 8 figures, 2 bases, for the possibility of using different formations, but for some reason I never got around to paint the second half of the Bavarian cavalry regiments, so Michael just mirrored that).

Our initial setup. The Kaiser's line infantry came on in massive columns, with the light infantry and light dragoons spread out on their left flank, while the Electorate's finest were deployed more thinly, with light infantry in skirmish formation up front screening the line infantry advance, and the cavalry (Cuirassiers and Chevaulegers) placed on the right, ready to advance on the enemy position. 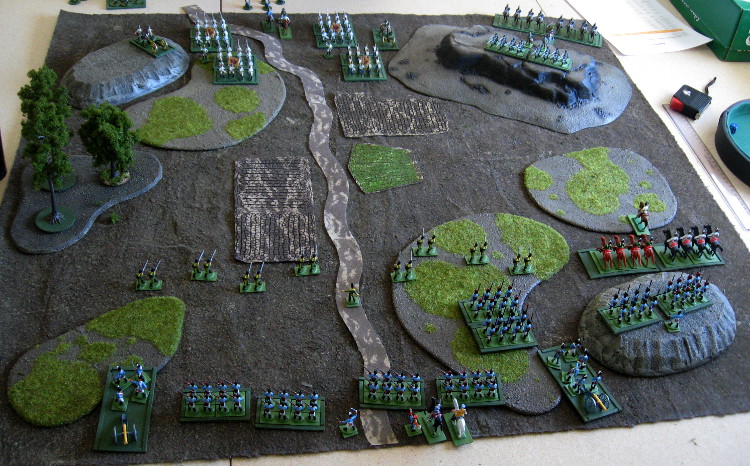 Archduke Michael opened the ball with a blunder, sending half of his line infantry and artillery marching off towards Vienna.

This unforeseen turn of events of course made the Austrians a bit reluctant to advance - the remaining line infantry brigade was rearranged to make up for the loss of the entire right flank...

...whereas the Bavarians sounded general advance, the center forming into line for more firepower. 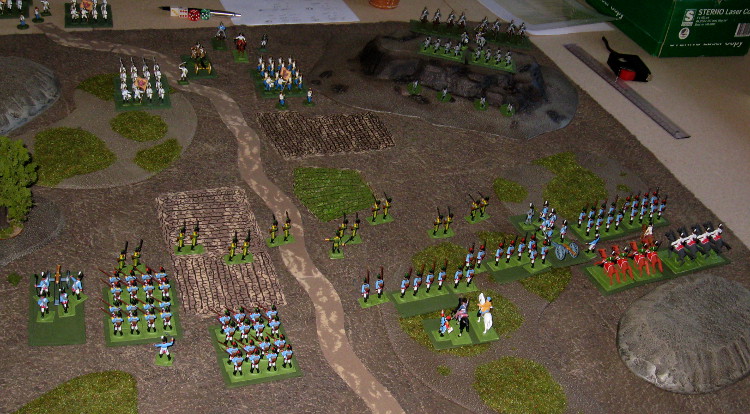 The Austrian commander desperately sent off one aide-de-camp after another to order the German infantry brigade back onto the field, but with little effect. The Bavarians closed in on the weakened Austrian position which started some spread fire.

The Bavarian cavalry brigade thundered forward to the sound of picket fire from the skirmishing light infantry.

The Austrian light infantry formed squares, which halted the attack. Luckily for the Austrians, one of the aide-de-camps had found the stray infantry brigade, and it now reappeared behind their right flank.

The Bavarians kept closing in on the enemy position, while the Austrians built up a massive infantry column on their right flank.

Two Bavarian battalions charged one of the Austrain squares... 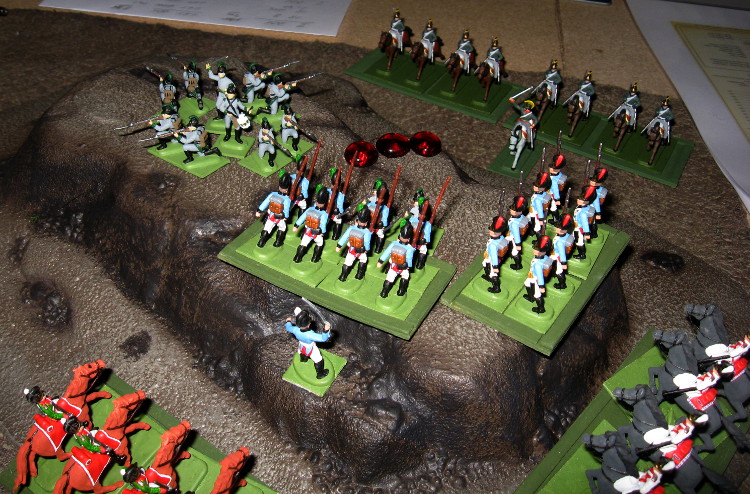 In response, the Austrian light dragoons closed in, but the Bavarian attack columns quickly reformed into square. 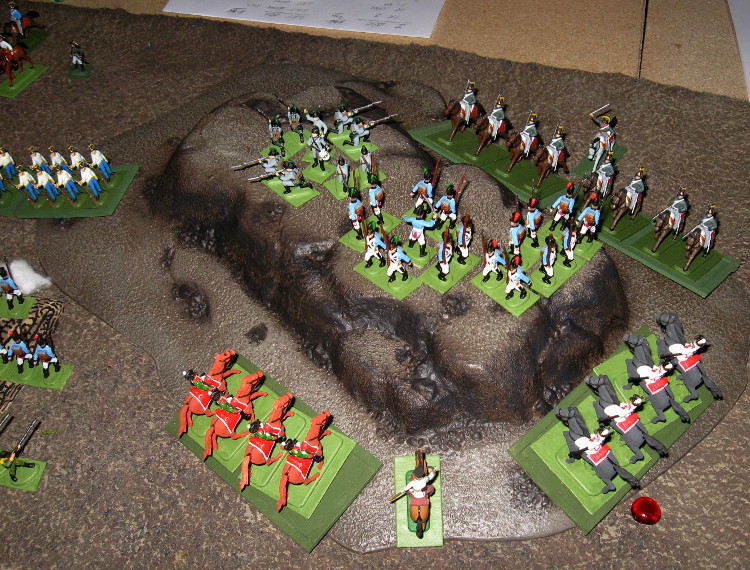 The massive Austrian  attack column charged the skirmishing light infantry, which evaded (I did not do this entirely correctly, but pulled them a bit to the side - they should have moved directly backwards, but this is what test games are for). The Hungarian infantry in the center also advanced to point blank range of the Bavarian line. 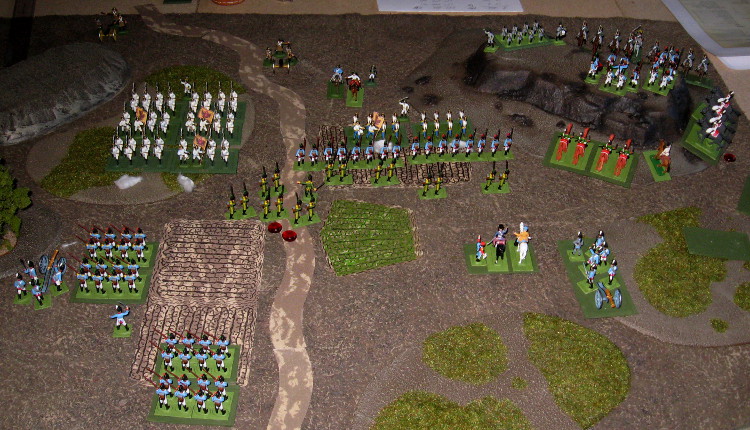 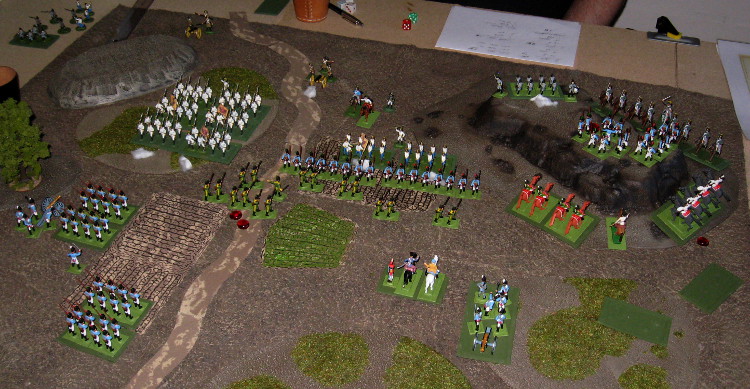 The Bavarian line steadied itself and delivered a full strength volley. Not enough to shake the Hungarians, though! The light infantry formed into attack column to be able to support the line against the expected attack. 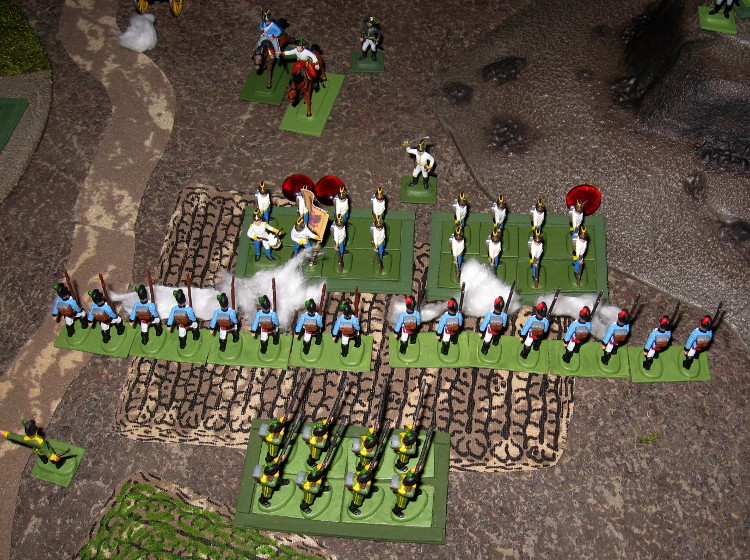 The Bavarians on the left flank charged the Austrian massed infantry and took some beating, but held their ground.

We had now reached dinner time (we were barbecuing tenderloin and some mushrooms, potatoes, and cabbage), and decided to call it a day.

One or two turns more would probably have seen some decisive action - I fear my leftmost infantry would have been annihilated, but hoped to be able to break the enemy center, and bring up the regiment lingering in the field at centre left to prevent the massed Austrians in turning my line.

As we left the battle, it may have swung either way.

We both liked the ease of the game flow, and we agreed that a lot of the situations arising 'felt right'.

I did not discuss this, but one aspect I find less enticing is the emphasis on decisive charges. I think it is too easy to just bunch up a heavy mass of attack columns and drive forward - if you get 3 moves you can move from well out of reach of muskets and only suffer closing fire - but I have to play more games to fully get the impression of how it affects the game.

Shall we play Black Powder again. Yes. Will it be our first choice of  Napoleonic rules? Maybe - for me it depends heavily on what else I come across, and how this holds up against other sets. I am definitely set on playing nappies on a regular basis, again. It was my first and foremost wargaming love, and there is not much I enjoy more than a gaming table filled with soldiers in neat rows and colourful uniforms!
Posted by Argonor at 21:14