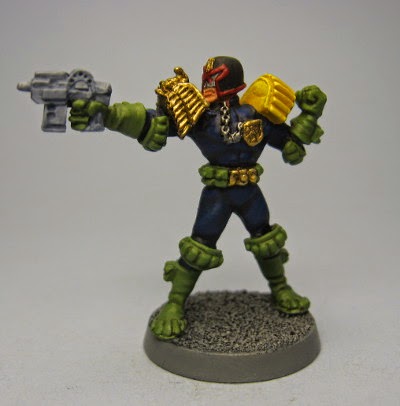 Painted this Street Judge of Mega City One for some Judge Dredd Miniatures Game action, and for the Future Wars Painting Club at the Lead Adventure Forum.

I rushed the paintjob a little bit, as the Future Wars Painting Club is picking up light speed (this entry is number forty in 6 days), so I wanted to make sure that I got him in before it would be too late.

I have a few grievances about this mini - although none that cannot be taken care of at a later point, if and when I decide to do so: 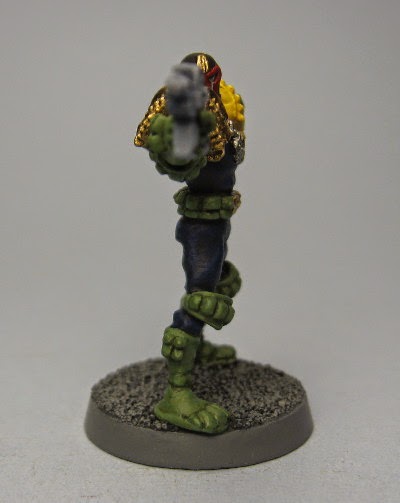 My Goblin Green series suffer from OMS (Odd-Mix Syndrome); I am not quite sure if all colours have been mixed from the same version of Goblin Green, and my highlighting colour is too bright (thus I mixed a pot with half of it with a little black added, but the resulting shade is not quite right, and probably not bright enough, either). So I would have liked to accentuate the hightlights on the green a bit more, but, as mentioned, I may do it on a later occation.

I was not quite sure about the four-colour-type blue jumpsuit (technically, it is meant to be black, but I like the comic-book look), and I probably should have highlighted it at least once more.

The contrasts in the gold do not seem to pop quite as much as I hoped for - next time I'll base-coat with a darker mix, and maybe finish off with highlights of tiny amounts of silver.

I researched as I went along, and all of a sudden I am not so sure about the yellow left shoulder-pad: 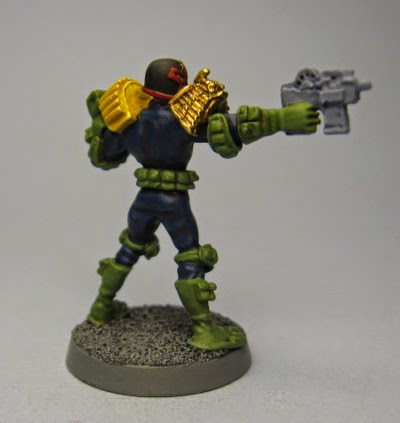 Sources are not consistent, and some seem to suggest that both the eagle-pad and the shoulder-pad should be gold, while others make it look like they are both yellow. In all circumstances, I think the yellow is a bit too bright, although in line with the 'four-colour' look. May try a more dark 'golden' yellow, or simply paint it gold, next time.

Speaking of which, some sources show elbow and knee guards as gold/yellow, too. Wonder what that would do to the overall look of the uniform in my interpretation...?

AND, I have seen the utility belt in a earthly grey-brown sort of leathery coloer, too.

I think I may need a darker shading colour for the Lawgiver, but not necessarily... 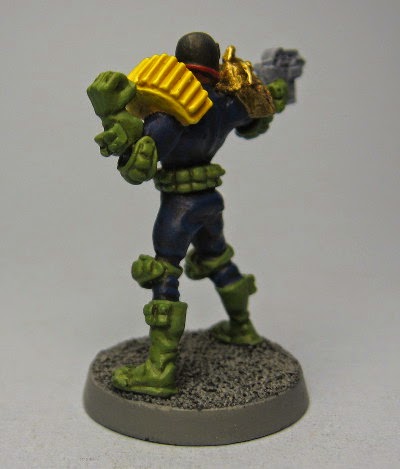 I only gave the top 1/3 of the helmet a light drybrush with a dark blue-grey; I think, maybe another lighter shade added to the very top would be good...

I also think that the red rim of the helmet could have been a bit brighter - I may try with the old Citadel Blood Red (bolter round pot) next time.

Comments and suggestions are most welcome - I'm not a big Judge Dredd connaisseur, so if someone that IS could shed some light on the peculiarities of the Justice Dept. uniforms for me, I would be grateful! 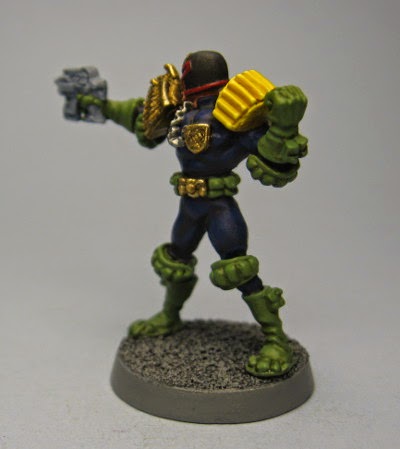