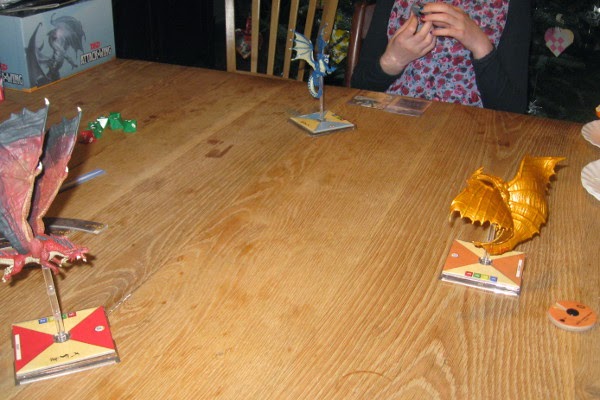 Just after playing the first game, we immediately staged a three-way game, as Anna also wanted to play.

We somehow had the movement initiative upside down, so the Lvl 10 Copper Dragon Galadaeros moved first all the time, while the Lvl 8 Red Dragon Balagos moved last.

We were well into the third game before I realized the mistake, but I'll see to that we get it right from now on!

As mentioned in my previous post on this subject, combat in the Quick-Start rules is very brutal, and as demonstrated, getting caught in cross-fire is a very bad thing.

Under the full rules, Ashaedra might easily have survived getting caught between the two others, but the simple rules should probably not be used as we did for games ivolving more than 2 Dragons, as it is far too easy to gang up and quickly dispatch an opponent.

We are in the middle of a game of treasure hoarding that I hope we can conclude tomorrow (otherwise we'll have to scrap it, as the dining table is reserved for tomorrow eve's feast).
Posted by Argonor at 18:26