New Rose Bed for the Wife! 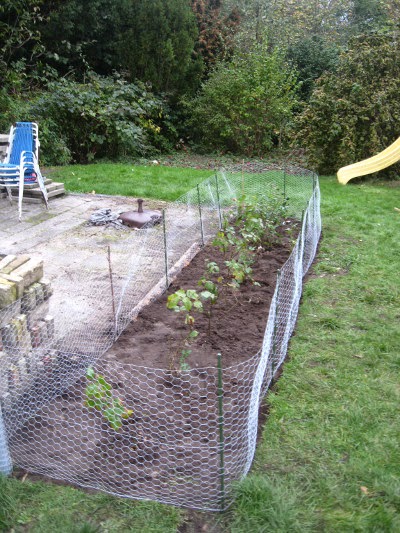 I did not quite make it for our wedding anniversary (last Thursday), so I had to take the family our for dinner, although I did manage to remove quite a bit of turf (then used for building one side of the kids' lair at the creek in the back garden).

Lots of rain, made it difficult to work in the garden, but today, finally, we got most of the roses moved to the new bed in front of the tiled terrace.

The terrace seems to have been laid out in stages - each with a different type of tile - and at some point I'll probably remove most of it and re-do it with a single type.

For now, I'll settle for the new rose bed.

The roses shown in the pics are all from the north-east corner of the front garden, and I have to clear a spot there for an apple tree of a kind that was thought extinct here in Denmark, but had survived in the hedge of farm near Egebjerg belonging to my wife's relatives. 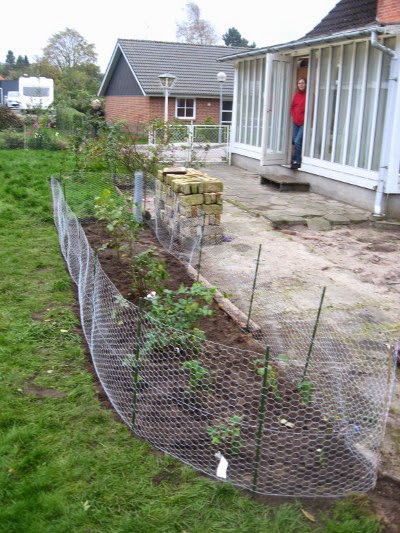 Twigs from the old tree have now been grafted onto new trunks, and my wife's father's uncle's widow, residing on the farm, now have 2 young trees, of which we have been offered one - and with my interest in history, how could I refuse?

The apple is called a Berliner Sheep's Snout Apple (because of the oblong shape), and it has next to no core, meaning that almost the entire fruit is edible.

As you can see in th epictures, the lawn is in dire need of a mowing, but I have to get that corner ready for the apple tree, which means that I have to chop down 3 bushes (and remove their roots), and as we would like to get the tree planted before the frost, this task has to be prioritized.

Working in the garden also meant that I did not get anything painted today, but I've realized that I played a game of Pike and Shot and Zombies that I didn't blog, so expect an AAR tomorrow!

In the meantime, you'll have to settle for a couple more pics of the WIP rose bed.

I removed the turf to mark the edge of the bed, so I could piut aside the rods and string I used for making a straight cut.

My wife, who has been wishing for a dedicated rose bed ever since we moved here, secured the newly moved roses with some chicken wire, mainlh to prevent out nice, but rather stupid, dog, Molly, from running through (and digging up) the bed.

Next up is getting the garden corner ready, which means me once again acting up a chainsaw-wielding loonie, much to the dismay of our neighbours - but you can't please everyone, and family comes first!

One last picture shows how the new bed is going to connect to a small existing one - and one of our 3 remaining big kittens scouting the changed environments (its brother found a new home at a farmstead in the Alps of South Funen (aka Svanninge Bakker, near Faaborg), and we now have only one left to give away, as my daughters are keeping one each. 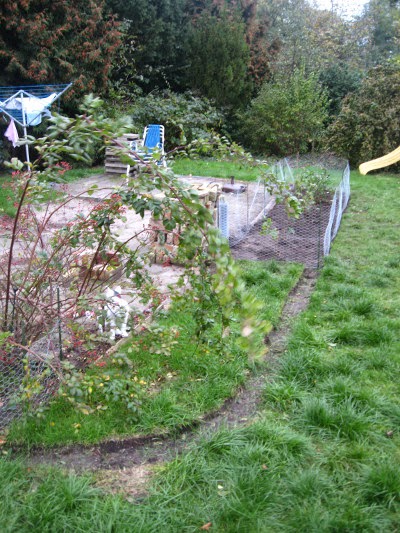 It's getting late, and I've missed 2 episodes of Doctor Who (12th Doctor) over the last couple of weeks, that I have to catch online. so I'll wrap this up with a promise of more gaming related news tomorrow (the postman also delivered a package while I was at work, and the contents should prove worth a line or two).