I have not done much hobby stuff over the weekend - it was work weekend, and the garden allotted most of my spare time.

But the printer has been busy, as I am experimenting with upscaling Terrain4Print's Small Fantasy Viking House.

As you may recall (otherwise you can check below), I did not find the inherent size of the model convincing for 28mm miniatures, as the doorway stands below  the height of the shoulders of most minis.

Thus, I did a 120% upscaled version, which you can see to the left. It is better, but if that Royal Guard were to enter, he would still have to crouch quite a lot!

I would like the (most of) my buildings to actually look like something the minis could be living in, so I had to make another test. Luckily, my printer had nothing better to do this weekend, so as long as there was PLA on the spool, I could just knock myself out.

My third print was scaled up by 130% instead, and although I am almost there with that, I think that I shall print a 140% version, before deciding on the size for printing the larger house offered by Terrain4Print.

I am also printing some palisades, and the platform above the gate is printing as I write this.

The palisades are modular, and the files include a pin for assembling the pieces, but I had to scale it up to 105% to get a snug fit, so you may want to print a test or two if you start printing the palisades.

I am waiting for my filament pusher to get a re-stock (should happen next week), as I am running out of some of the filaments I am using (I prefer the light grey PLA for gaming models, as the details pop better than with other colours), but I shall be printing some more palisade pieces (including some 90 degree corners), until I run out of brown and grey stuff - then I shall allow myself to let the printer be employed for non-gaming purposes for a while. 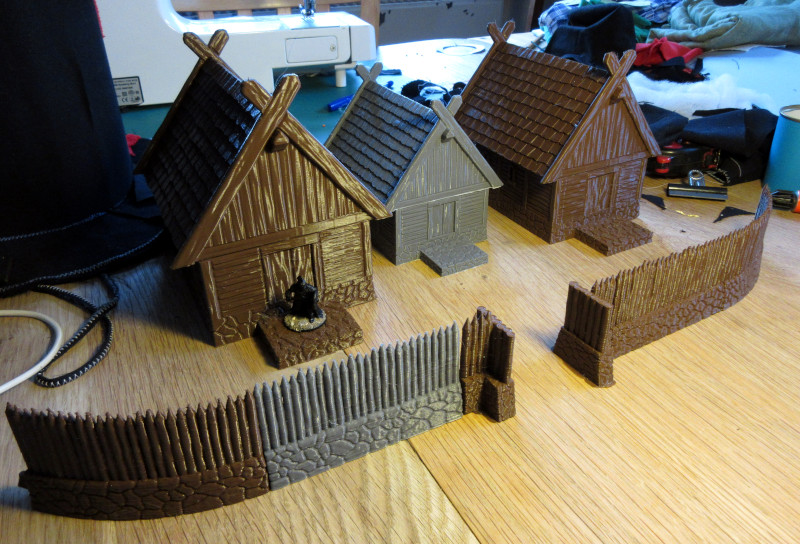