I had managed to get two gaming appointments within four days, which is a rare occasion for me, but here Kevin and I found ourselves in the garage attic on a plain Tuesday evening.

Kevin brought the Greenskin horde I managed to beat the last time we met, but he had changed the composition considerably, bringing myriads of Goblins to the fray (with only two units of War Orcs and a Boss riding a Troll).

I brought a slightly reduced infantry force (only 35 pts this time) with my Necromancer riding a Chariot, and a single Blacksoul to put in a Skeleton Horde. In retrospect, I probably should have swapped my characters, keeping a Horde with the Necromancer in reserve, out of harms way, while the Blacksoul should have ridden the Chariot through droves of Goblins. Well, live and learn.

We agreed to set up 12" in instead of 8" to reduce marching time, as as a mid-week evening does not allow for more than about 4 hours of gaming at most.

The Orcs were the attackers (I think the Lords of Undeath have a far too low Aggression level; in my book, the Undead hordes of a Necromancer are more likely to be invading the lands of the living, while sensible beings steer clear of the nightmare-ridden badlands, but, well...)

As the Goblins covered most of the width of the battlefield, I opted for a more spread-out formation in order to make it as difficult as possible for the Greenskins to sweep in behind my battle line and sack my Camp (placed at the far right corner of my table edge).

Turn 1 saw a steady advance from both sides - I forgot to use my Stratagem, and Kevin only remembered his because I grumbled 😆 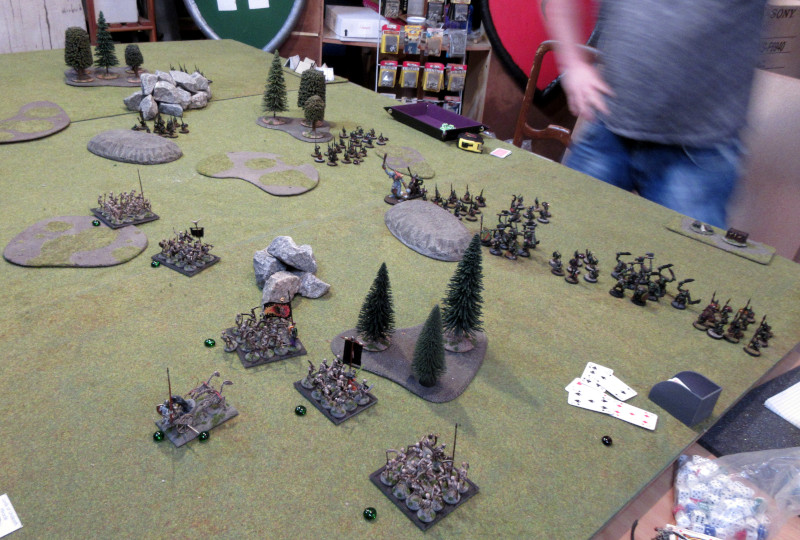 Turn 2 saw the first fighting. Kevin used his Stratagem to give his Troll/Boss an extra activation, allowing it to make contact with the Skeleton Warriors in the center of the table. As usual, I wasn't able to even scratch back, so I lost 4 Warriors. A s a side remark, a Troll with a Character wielding a weapon upgrade is a beast. My army really lacks the option of Monsters; the closest I can get is a Chariot with a buffed up Blacksoul, and I am still not sure that it would be able to win a fight against the Troll... 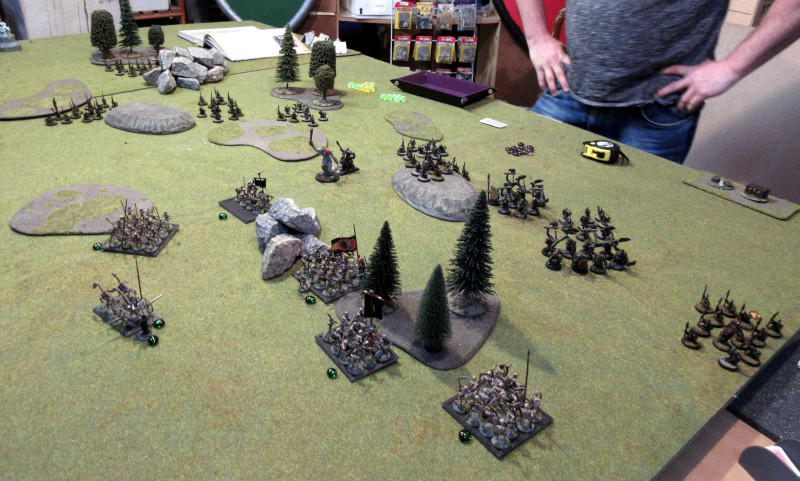 Turn 3 the last Warriors fell to the Troll. On my right flank, a unit of Goblins was annihilated by a Skeleton Horde (we made a mistake, having it Recoil off the table), which was then in turn charged in the flank by some War Orcs.

At this point I already doubted that that I would be able to turn the tide in my favour - simply too many enemy units that I could get on the offensive without exposing my flanks/rears to attacks.

Turn 4.
My Chariot made a desperate dash towards my Baggage Train (graveyard) in an attempt to prevent it from being sacked by the Goblin hordes closing in.

A unit of Goblins were routed by a Skeleton Horde in the center, while the Horde on my left flank was getting mauled by the Troll/Boss.

On my right, both units of War Orcs were now stuck in, and I began succeeding in raising some skeletons. 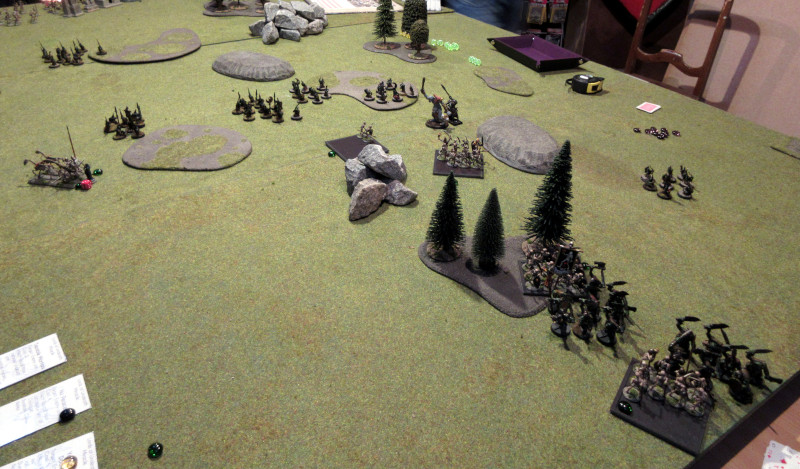 Turn 5.
The two Skeleton Hordes in the center were cut down, mainly be the Troll/Boss, but also by some pestering archery from the Goblins. One of the War Orc units broke, and Argonor was able to raise another couple of Skeletons this turn. My Chariot dispatched a unit of Goblins, while another mob reached my graveyard.

I was now a mere 3 points away from my Break Point.

Turn 6 saw me dispatching the last War Orcs, and raising another Skeleton, but my Necromancer came too late for saving the graveyard from being sacked (the Sutlers did not show, otherwise I might have survived another couple of turns).

This was a rather cinematic moment, actually, with my Necromancer racing his Chariot to try saving the moment, and the Gobbos swarming the graveyard just before he could have prevented it. 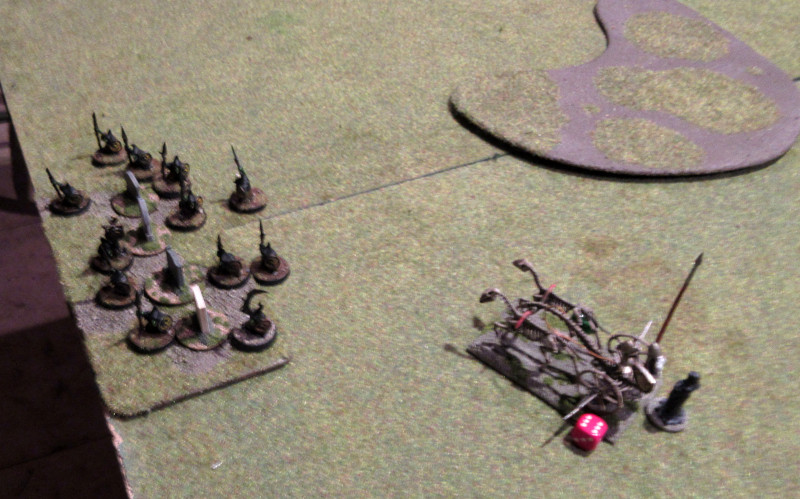 Below is the final state of affairs. I think I managed to kill off 21 points of Greenskins, which means that 3 more points without me losing more Main Force units would have given me the victory, which again means that if my Chariot had reached the Goblins, I would have won, and that just makes the final action even more cinematic! As it were, I lost 24 to 21, and I still think the Lords of Undeath and the Orc Warlords lists are very well balanced, whereas I find it hard to think of way to beat the Dwarves. 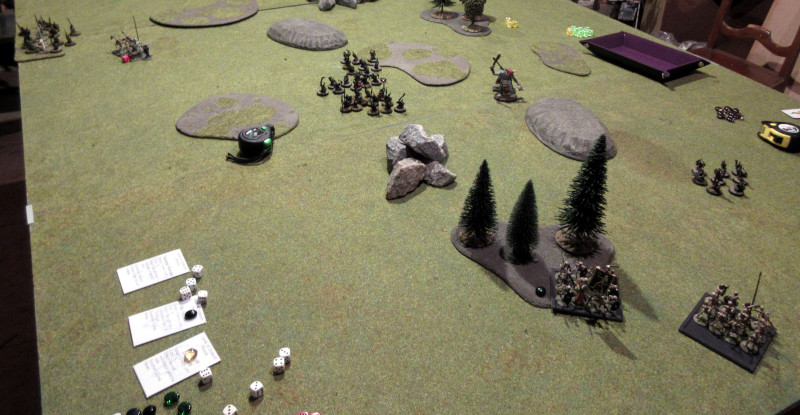 Another closely fought scrap with the Orcs.

I need to rethink how to protect my Necromancer when fighting the Orcs, so that I may free up my Chariot for fighting the Troll (I have NO doubt whatsoever, that I shall have to face it again after its performance this time). Placing him in a Horde near my Camp may be a solution to that, although it shortens my phalanx/battle line.

I also need to pay attention to the table size recommended, as very wide tables are NOT to my advantage, so mayhaps we shall play on a slightly narrower surface the next time.

When facing an enemy with that many cheap units, I may have to take either the Undead Knights to mop up some easy points while my main battle line is getting pounded (actually, I think that if I can occupy the Troll with a buffed up Blacksoul in a Chariot, my Skeleton units will be able to hold their own, and maybe even score enough points for the Knights to carry the day hunting Goblins). I do want to try out some Skeleton Archers , soonish, though, and I think I shall be rummaging through my Necropolis (big box with unfinished Undead) later today to see, what I can find.

Although I have lost two in a row, the last week has whetted my appetite for more God of Battles, and I shall be making appointments as often as I can get them scheduled!
Posted by Argonor at 10:48