They Have a Cave Troll! 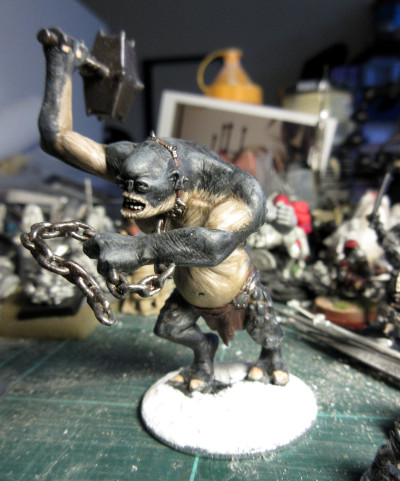 For Thursday, when I have an appointment with Emil for playing Age of Fantasy Skirmish, I am re-basing this Cave Troll to use as support for my Moria Goblins.

Emil is going to command a Gondor patrol lead by Boromir, so I thought I might need to pack a bit of punch for the encounter, as Boromir and the Knight of Dol Amroth would otherwise surely just cut a swathe through the Goblin ranks.

I may not be able to finish the process in time, as I have to attend classes the next couple of days, but I think I should be able to at least get the base base-coated and covered in sand, so it will have to do as it is for that particular game.

I am also re-basing some Goblins, but I do not expect to use other than the Boss (metal) Goblin - the rest of the hunting party must stay on their slottas for now, while I work on another batch to take their place.
Posted by Argonor at 19:48