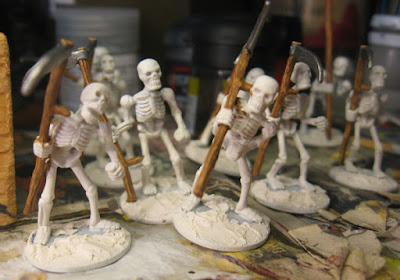 I am currently working on my second Skeleton Horde unit for my God of Battles Lords of Undeath army.

The first lot was assembled many years ago, but did never make the cut to the painting queue; They have been rebased the usual way, to 20mm steel washers, given some filler and a white spray primer, and are now in the shown state of completion. 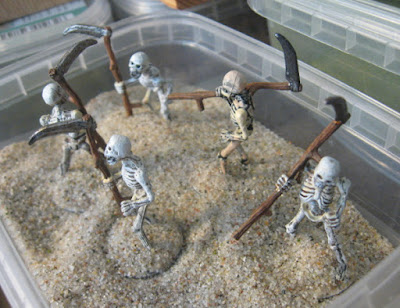 The second lot had been painted, but is now also rebased, and I am giving the bases a coat of beach sand.

When the above skellies have been touched up with white, everything is going to receive a Devlan Mud wash, before the last bases are sanded, and all the bases get painted and flocked.

Below are the leader and musician of this unit; the bugler seems to have lost his right hand at some point, but as he, obviously, also has no lungs, I do not see that impeding his value for the unit (for martial impact, he can always stab opponents in the eye with the arm stump). 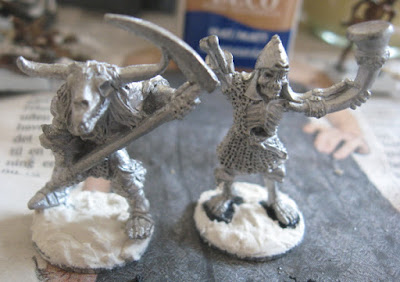 All these guys can, of course, also be used for Frostgrave, and, actually, I think I shall be mocking up a Necromancer warband using various undead as the retainers, just to try out the rules.

Well, 'nuff said, time to get back to work!